All Labor and Liberal members voted down this simple but inspiring and compassionate motion. It was like watching people walk past a person trying to help someone bleeding on the road after a traffic accident, saying that maybe the bleeding had gone on 'long enough' but it wasn't up to them to help.

This clear and passionate speech goes to the heart of why it is so vital that we all - especially PM Albanese - stand up for Julian Assange.  If we want to be free, we need to free Assange. Lorine (or Anita) is the effective convenor of the Friday Night Flinders St Station Vigil for Julian Assange. She has been doing this for years now, in all weather, and has built up a regular crew of speakers and poster-bearers. She is a real Australian hero. 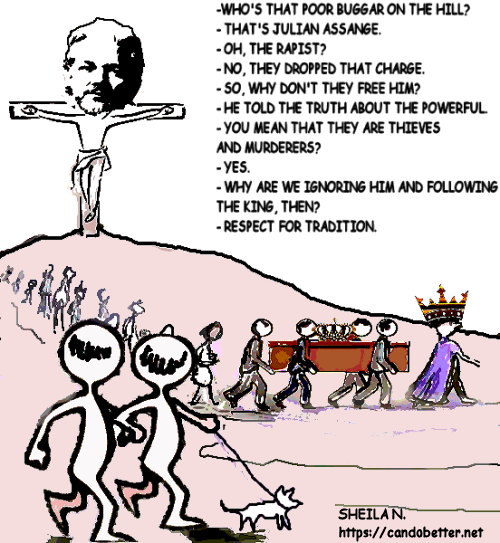 At a protest for Julian Assange, which commenced outside the Victorian State Library at 12:00pm on Sunday 28 September, protestors demanded that the Australian government use the power vested in it as a sovereign national government to make British Prime Minister Liz Truss end the illegal imprisonment and torture of Julian Assange.

You can help build the protest by printing and distributing the A5 leaflet from which this article was adapted (front page PDF, back page PDF, instructions a

Nils Melzer’s book about the persecution of Julian Assange – Nils Melzer, The Trial of Julian Assange, A story of persecution,[1] must be heeded, due to Melzer’s extraordinary position and status as an independent international investigator and legal expert in complaints of torture and ill-treatment, [2] which has given him access to details and documents not previously available. That is probably why it is hard to get the book in Australia. 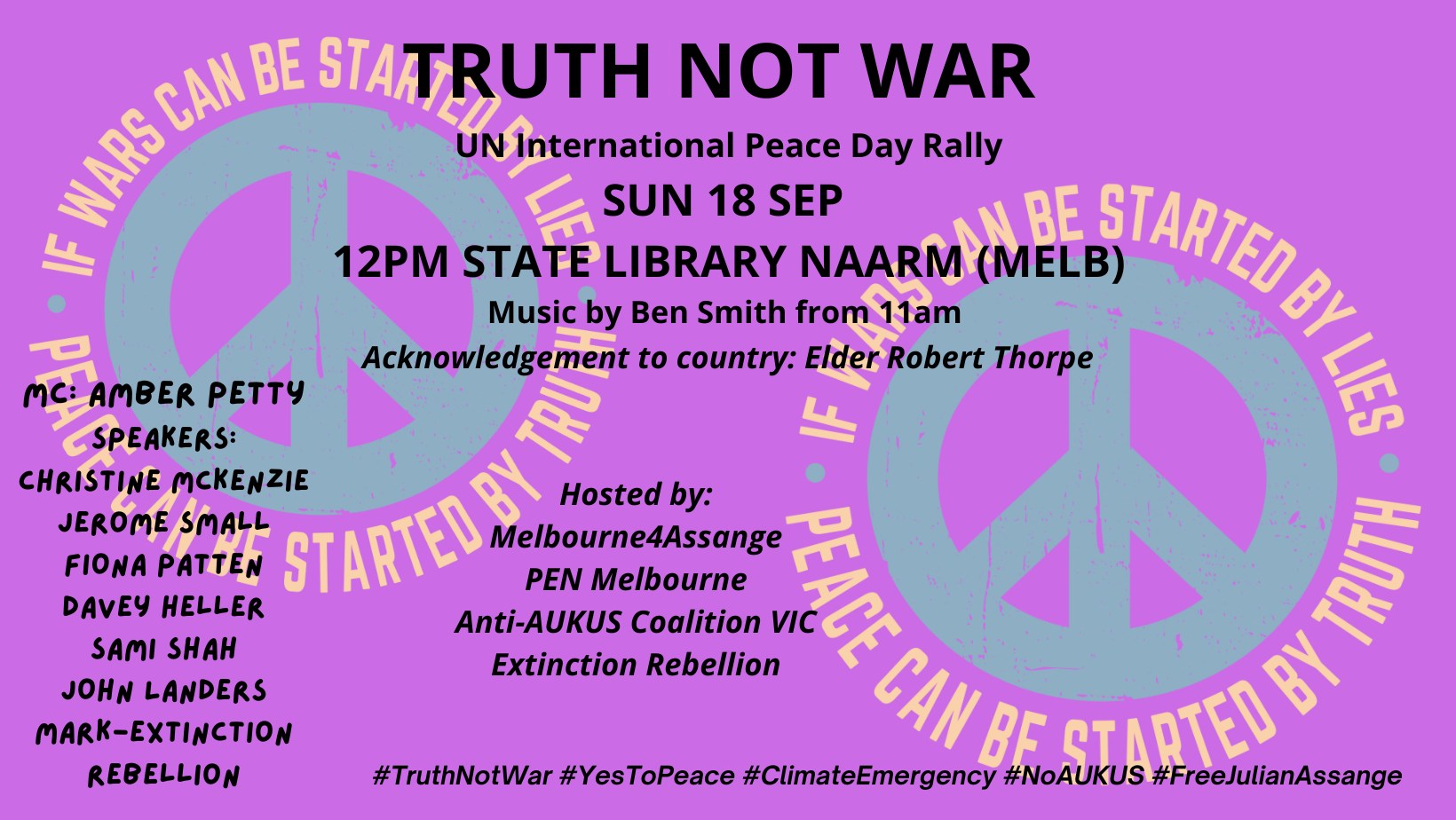 Update 10 September: OfficeWorks no longer prints on the back side of an A4 sheet!? In just over a fortnight from today, at 12:00pm on Sunday 18 September, outside the Victorian State Library, 328 Swanston Street Melbourne, ther

Australian Parliament, which sits next week from Monday 6 September, must be made, finally, to debate Julian Assange's fate. At the weekly vigil for Julian Assange outside Melbourne's Flinders Street Station in the evening of last Friday 26 August, James Sinnamon explained how, if Australian Prime Minister Anthony Albanese told the UK Prime Minister Boris Johnson to end its imprisonment of Julian Assange, he would almost certainly comply without delay, and Julian Assange would

The article below is an adaptation of a double-sided A4 leaflet (PDF attached below) which I handed out last night at a community meeting in Frankston, Victoria. The meeting was organised by Peta Murphy, the Federal Labor member for the local seat of Dunkley.

Inside is an interesting and lively video of the 141st week of protest at Sydney Town Hall in the name of justice for Julian Assange. As well as defending Assange, people use this as a platform about matters they feel are being suppressed. You may not agree with every assertion, but it gives us a good insight into what a lot of people are thinking.

Her Majesty the Queen is sitting on top of an explosive pile of stinking manure. Nils Melzer's book is like a bomb about to go off. How long can crooked judges and governments hide? How long can the mainstream press pretend that nothing's happening?

As a result of western crimes against Iraq, a person continues to serve time in prison. "Strangely enough, that person is not any of those who initiated the offensive on Iraq. Instead, he's the man behind exposing American crimes in places like Iraq and Afghanistan and Guantanamo Bay: A whistleblower called Julian Assange." Marzieh Hashemi, journalist and presenter of Secret Files.

From 12:30pm today at the Hiroshima Day protest in front of the Victorian State Library in Flinders Street in the Melbourne CBD, John Shipton, Julian Assange's father, will be speaking.

Discussion about the plight of the most famous and most revered Australian forbidden in your Parliament!? In 2020, the shadowy Parliamentary Selection Committee, which is controlled by the Labor Party and the Liberal/National coalition, refused to allow Tasmanian independent Andrew Wilkie MP to raise, for discussion, the plight of that most famous and revered Australian Julian Assange.

Filmed by James Sinnamon on 28 July 2022 at the Converge on Canberra Protest for Julian Assange.

No sign of Anthony Albanese at this brilliant event, although we know he was in parliament.

Update, Tue 26 July: A new larger PDF file which includes a duplicate of the first double-sided A5 page has been uploaded. Without this addition, the second page will be blank. I am about to find out if the problem is fixed. My apologies.

Julian Assange has been imprisoned through barbaric abuse by powerful people of their positions in government and the law, and through the almost total disorganisation of ordinary people. People's ability to defend themselves at law and find crowd support in England nearly 400 years ago was often more sophisticated and engaged than our own.  A famous case was when, in May 1649, Cromwell arraigned John Lilburne for high treason and incitement of Leveller mutinies in the New Model army. 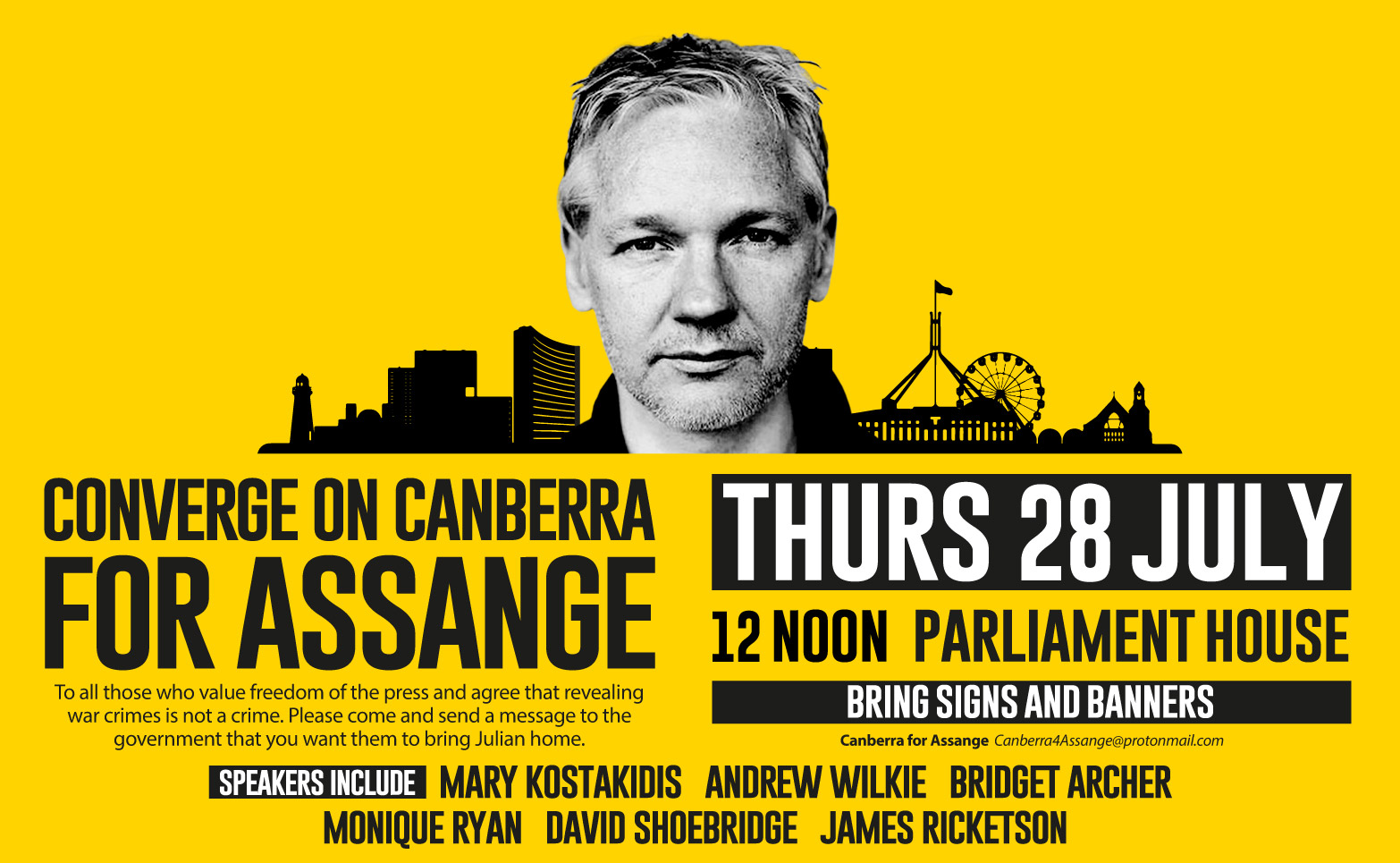 On last Sunday 23 July, Julian Assange's 51st birthday, supporters of Julian Asssange in Melbourne held two events to both celebrate his birthday and to demand the Australian government act to make the British government end its illegal imprisonmment of julian Assange and to prevent the no less illegal efforts by the United States to extradite Julian Assange.

Meet at Vic State Library for 11am rally and march 3 July 2022, Julian Assange's birthday. Australia's award winning journalist, outstanding publisher, creator of WikiLeaks, and possibly the most famous, heroic, and persecuted person in the world, turns 51 years old. This is his 4th birthday spent locked away in Belmarsh prison, London. His previous 7 birthdays were spent locked away in the Ecuadorian Embassy.

At its meeting of Tuesday 28 June, the Melbourne City Council unanimously passed a motion by Cr Olivia Paul which called upon the Australian government to make strenuous diplomatic intervention to free Julian Assange.

"That Council: 1. Expresses grave concern that on 17 June 2022 the British Government approved the extradition of Wikileaks co-founder Julian Assange to the United States; 2. Affirms its support for freedom of expression, freedom of the press and whistle-blowers and for their protection in all jurisdictions everywhere; 3.

"Assange's case is a mirror which reveals the hypocrisy of the US and British claim to defend press freedom. [Because he revealed their war-crimes ...] the US government has, for more than a decade, filed unwarranted charges of sexual harassment, espionage, and computer-misuse against Assange [...] continuously suppressed Assange through secret surveillance, global pursuit behind the scene, deals, and other means. Britain has spared no effort in cooperating [...]"

Friday, 17 June. In a horrible clown-world, the UK government has approved the extradition of WikiLeaks founder Julian Assange to the US to face criminal charges, despite an original British judge ruling that he should not be deported due to risk of suicide and a warning by his lawyer that he still remains a risk - and the fact that he has committed no crime.

"Now that you are Prime Minister, we urge you to waste no time in making good on your wish to see Julian Assange’s ordeal come to an end, as the issue is now beyond critical, with his current health status meaning time is of the essence. It is now much too late for legal remedies.

Tony Wakeham is the first speaker. Good on him.  Great speech.