On this episode of Going Underground, Afshin Rattansi speaks to Australian journalist and filmmaker John Pilger about the takeover of Afghanistan by the Taliban. Pilger demonstrates a really solid grip on history here, rendering almost irrelevant most other discussions of recent events in Afghanistan. He describes the US military as a killing machine and discusses why the Afghanistan war must be viewed through the lens of Western imperialism, the scale of civilian casualties, and destruction of Afghanistan by NATO countries, how the US created today’s situation by supporting Afghan jihadist forces against the Soviet Union throughout the Cold War, the social progress and progressive reform lost to history with the fall of the Soviet-backed PDPA government in Afghanistan, and much more! Pilger also discusses the anniversary of the Pinochet coup in Chile and the trial of WikiLeaks founder Julian Assange.

In this episode, Afshin Rattansi of Going Underground speaks to legendary journalist and filmmaker John Pilger about Julian Assange’s latest extradition hearing on Monday, which Pilger attended. Pilger discusses how Assange appeared at the trial, the bias of the judge against the journalist, the lack of mainstream media coverage of his persecution, his health and conditions in Belmarsh Prison, CIA spying on the WikiLeaks founder, and more. Next, Afshin Rattansi speaks to Chris Williamson MP about Assange’s extradition hearing, Williamson's motion in the House of Commons to condemn Assange's treatment, why his persecution is of international importance, the silence of mainstream media on Julian Assange, the lack of vocal outrage from Jeremy Corbyn and the Labour front bench over Assange’s treatment, and more!

At 1:00pm on Sunday 10 March originally, incorrectly the given date was 10 May - Ed) outside the State Library in Swanston Street Melbourne, supporters of investigative journalism, free speech and human rights will rally to demand that the Australian government act to free journalist Julian Assange from the arbitrary imprisonment he has faced inside the London Ecuadorian embassy since October 2012 when he sought asylum, that is more than 6 years ago.

Assange's living conditions inside the narrow confines of the Ecuadorian Embassy were already poor. They have been deliberately made worse by the new Ecuadorian President Lenin Moreno. This is consistent with President Moreno's treatment of the Ecuadorian people to whom he made many promises in the election 19 February 2017, which he subsequently broke.

As described below by John Pilger in his address to the Sydney rally of last Sunday 3 March, Assange's health and even his life are now at risk. So, the need for the Australian government to act to protect one of its citizens is even more urgent.

John Pilger reminds us of the 'journalists' who let down Julian Assange whilst profiting from the information he released. He reminds us how far down journalism has sunk. He uses the term 'Vichy-journalism' to good effect.

Transcript of John Pilger's magnificent speech on why Julian Assange is being persecuted, who is responsible, and the mass media role

[Headings have been inserted by Candobetter.net editor.]

John Pilger and Vanessa Beeley talk about the amazing growth in mass-media supported war propaganda in our times, including the grotesque fantasies manufactured about Russian intervention in US elections and the creation of a false cold war. Vanessa Beeley describes how, when she was in Aleppo, she was witness to the absolute fabrication of what was happening there. And now, the almost complete silence on what seems like American ethnic cleansing of Arabs in Raqqua - where the US is using depleted uranium, phosporos weapons and not providing any humanitarian corridors.

It is Mrs Hillary Clinton who should be in prison, not Julian Assange. For anyone who is still confused about what on earth Wikileaks has demonstrated about Hilary Clinton, watch this very clear interview by Australia's most famous independent Australian journalist, John Pilger and check the transcript below the video. Assange makes perfectly clear the association between Saudi Arabia and ISIS and Saudi Arabia and the Clinton Foundation. It shows that Hillary Clinton, whilst Secretary of State (!), knew and knows that the Saudi Arabian and Qatar governments were and are funding ISIS. This relationship with terrorism has been going on for years. The Australian Government and opposition must also know this. And, the Australian government, by not getting Assange safely back home is spectacularly failing its obligations to protect its own citizens from persecution. Our government is a cowardly lackey to the United States and the opposition and the Greens are just as bad because they say nothing about this. Our press protects this collusive silence.

"Propaganda is most effective when our consent is engineered by those with a fine education - Oxford, Cambridge, Harvard, Columbia -- and with careers on the BBC, the Guardian, the New York Times, the Washington Post. These organisations are known as the liberal media. They present themselves as enlightened, progressive tribunes of the moral zeitgeist. They are anti-racist, pro-feminist and pro-LGBT. And they love war. While they speak up for feminism, they support rapacious wars that deny the rights of countless women, including the right to life." John Pilger.

This article is republished with permission from John Pilger. It was first published at http://johnpilger.com/articles/inside-the-invisible-government-war-propaganda-clinton-trump 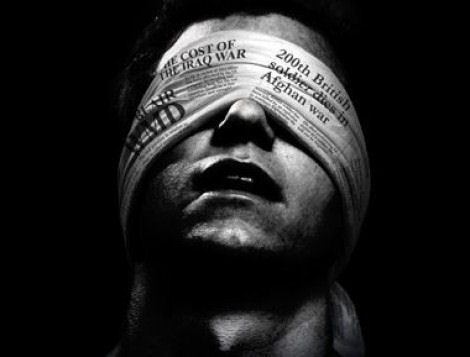 The American journalist, Edward Bernays, is often described as the man who invented modern propaganda.

The nephew of Sigmund Freud, the pioneer of psycho-analysis, it was Bernays who coined the term "public relations" as a euphemism for spin and its deceptions.

Following the ISIS outrages in Beirut and Paris, John Pilger updates this prescient essay on the root causes of terrorism and what we can do about it. In transmitting President Richard Nixon's orders for a "massive" bombing of Cambodia in 1969, Henry Kissinger said, "Anything that flies on everything that moves". As Barack Obama wages his seventh war against the Muslim world since he was awarded the Nobel Peace Prize, and Francois Hollande promises a "merciless" attack on the rubble of Syria, the orchestrated hysteria and lies make one almost nostalgic for Kissinger's murderous honesty.

As a witness to the human consequences of aerial savagery - including the beheading of victims, their parts festooning trees and fields - I am not surprised by the disregard of memory and history, yet again. A telling example is the rise to power of Pol Pot and his Khmer Rouge, who had much in common with today's Islamic State in Iraq and Syria (ISIS). They, too, were ruthless medievalists who began as a small sect. They, too, were the product of an American-made apocalypse, this time in Asia. Article first published on 16 November 2015 at http://johnpilger.com/articles/from-pol-pot-to-isis-the-blood-never-dried

"Today, the world's greatest single campaign of terror entails the execution of entire families, guests at weddings, mourners at funerals. These are Obama's victims. According to the New York Times, Obama makes his selection from a CIA "kill list" presented to him every Tuesday in the White House Situation Room. He then decides, without a shred of legal justification, who will live and who will die. His execution weapon is the Hellfire missile carried by a pilotless aircraft known as a drone; these roast their victims and festoon the area with their remains. Each "hit" is registered on a faraway console screen as a "bugsplat"." (John Pilger). Article republished with permission from author. First published 26 February 2015 at http://johnpilger.com/articles/why-the-rise-of-fascism-is-again-the-issue