These pages will be dedicated to ensuring that John Howard does not get re-elected in 2007.

If Australia had a critical and enquiring newsmedia he would not have remained in Govenment beyond 1998 after his Government's infamous collusion with Corrigan's attempt to destroy the Maritime Workers Union with mercernary strikebreakers and guard dogs. #3a3; margin: 8px 8px 8px 8px; float: left">

These pages will be dedicated to ensuring that John Howard does not get re-elected in 2007.

If Australia had a critical and enquiring newsmedia he would not have remained in Govenment beyond 1998 after his Goverenment's infamous collusion with Corrigan's attempt to destroy the Maritime Workers Union with mercernary strikebreakers and guard dogs. However, his Government has been able to survive, seemingly against the odds to inflict countless more crimes against the public interest, workers, the poor, the environment and future generations.

These pages aim to explain why this was possible and to ensure that his record of crime ends in 2007.

Whilst a vote against Howard and ultimately for Labor the only viable alternative to the Liberals in 2007 under Australia's preferential voting sytem, is essential, Labor is, itself not without grave shortcomings. These pages will also place Kevin Rudd's Labor Party and other oppositon parties such as The Greens, The Democrats and smaller left-wing alternatives under the critical microscope. 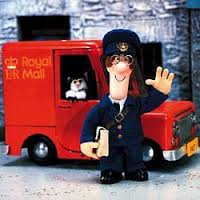 Please also download DRAFT.THEMERCURY.DAWTREY.ARTICLE.pdf (301K) of 17 May 2013, which is Keith Noble's more recent response to the misreporting and censorship of readers' expressed opinions by the Hobart Mercury, owned by Rupert Murdoch. - Ed, 19 May 2013
See also: The Port Arthur Massacre: A sceptical re-appraisal of 6 Sep 2010 by Syd Walker; Australian Conspiracy: the 1978 Sydney Hilton bombing of 6 Sep 2010 by Syd Walker.

Comments made on the previous Miscellaneous comments page from 4 December 2012 can be found here. If you have anything you would like to raise, which is likely to be of interest to our site's visitors, which is not addressed by other articles, please add your comments here . 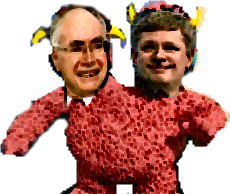 Prime Minister Stephen Harper of Canada has happened upon the John Howard confidence trick. In the shell game of electoral politics, it is important to get the audience to focus on the pea marked "bogus refugees" rather than the one marked "unsustainable immigration".

Surprise, surprise! The Federal Government has welched on its emissions-cut targets to mitigate climate change.
The Herald Sun reported today that the reason given is that the Rudd Government doesn't believe "the world will get its act together on climate change soon."

The global emergency is being treated like some kind of board game. Why don't they simply cut population growth?

On 16 October the Courier Mail gave striking prominence to two separate readers' letters, both arguing that John Howard be thanked for having "paid off the massive debt left to them by the previous Labour Government and having left a surplus of $22billion" without which the "Federal Labor Government would not have been able to hand us a lousy cent."

My attention to these letters was drawn by the following excerpt from the second letter at the top of the letters page:

"It would be appropriate for Kevin Rudd to thank John Howard for leaving a health surplus."

... together with a photo of a smiling bespectacled John Howard.

Given that the Courier Mail, as part of Rupert Murdoch's international media empire,seemed frequently to be a mouthpiece for John Howard, until he was deservedly removed from office in October 2007, it it hard to believe that the prominence given to these thoroughly inane readers' letters was accidental.

A number of convincing cases exist to indicate that the Murdoch press has manipulated the political systems in almost every country which has had the misfortune of having the presence of his media outlets since he turned on the Whitlam Labor Government in 1974. Arguably, the Whitlam Government became his first scalp after it was brought down in the constitutional coup of 1975.

In 2000 the elections won fairly by Al Gore were stolen by George Bush after Murdoch's US news outlets, contrary to the other reporting at the time, misreported George Bush as having won the vote in the critical state of Florida. Michael Moore, in Fahrenheit 911 argues convincingly that this set in train a process where the count was rigged in Florida with the aid of George Bush's brother and Governor of Florida Jeb Bush.

Since then the Murdoch newsmedia has in the US acted almost as if it were the privatised propaganda arm of President George Bush's administration, parroting its lies and deceit at every point on both the domestic and international front.

In Australia, the Murdoch newsmedia also often looked like a privatised propaganda arm of John Howard's government, supporting it to the hilt over almost every issue of any consequence, thereby keeping it in power until the 2007 elections when papering over the damage to the public interest caused by Howard's mis-rule proved too tall an order even for it.

The fact that the Murdoch Press actually editorialised just before the 2007 elections for a vote for Kevin Rudd's Labor Party, the marginally better of two supposedly "worthy opponents" according to Brisbane's Courier Mail, in no way fundamentally alters the impression that it remained heavily biased in favour of Howard right to the end of the election campaign. In order to retain some facade of credibility with its audience, one supposes that the Murdoch newsmedia must, on occasions, be prepared to bend a small way towards acknowledging the grotesque ugliness of political leaders like Bush and Howard who appear to many to do its bidding.

Similarly, the various Murdoch newspapers regularly adopts seemingly impressive postures of fierce journalistic independence and harsh criticism of the Howard Government and other Governments it otherwise uncritically supports, usually on peripheral issues. Even where the issues are substantial such as with the AWB bribery scandal, it often seems that the Murdoch newsmedia will find a way to twist the issue in a manner that suits its apparent values.

In the case of the AWB scandal it found the cause to be the AWB's single desk marketing policy, which it argues was a monopoly doomed to corruption. The desk was originally designed, however, to protect the incomes of Australian wheat growers from predatory buyers with vastly greater market strength. In 2008, the Rudd Government granted abolishing the single desk in a move which concorded with Murdoch opinion. In regard to the role of the Howard Government Ministers in the AWB scandal, the ostensibly independent critical-minded Australian editorial writers astonishingly accepted uncritically the AWB Inquiry's finding that the Howard Government ministers knew nothing about the bribes whilst the majority of public opinion believed that they did. Alternatively, it has been suggested that gross incompetence might explain why Howard, Downer and Vaile knew nothing of the bribes, if this was so. Incompetent or guilty, that didn't subsequently prevent the Murdoch newsmedia from proclaiming over and over again how brilliantly the Howard Government had managed our economy.

These bouts of seeming journalistic independence, of which the Murdoch newsmedia never fails to take an opportunity to remind us, fit Canadian Media critic Barrie Zwicker's description of 'bait' - lures to induce a somewhat critical-minded public into accepting the 'switch' to other ideas which probably better serve the interests of the Murdoch empire and those of wealthy fellow members of the elite.

It didn't take very long after the Murdoch newsmedia momentarily hopped on board the Rudd bandwagon, for it to begin to campaign against the Rudd Government. Only months into its term it found excuses to depict the Government as crisis-ridden, although turmoil was world-wide on many fronts. It did not, however, yet openly campaign for the Government's downfall. Is the Murdoch media now in a position to place pressure on the Rudd Government, if the government does not do what it wants? Could we expect it to turn against Rudd with a vengeance, particularly as the international financial crisis hits Australia?

Historically, there are two typical likely outcomes from such a campaign. The first is the outright removal of the Labor Government as happened with Whitlam in 1975 - also a time of oil-shock. The second is to cause a split from the Labor Government of a more pro-business-wing of the Parliamentary Labor Party, which would be prepared to join forces in a more Murdoch-media-friendly coalition Government. Such a split occurred in 1931 when the Scullin Labor Government was brought down near the start of the Great Depression, after the Wall Street crash of 1929.

Absurdly, the odd article implying that the current economic difficulties faced by the Rudd Government were already of its own making, and not that of the previous Howard Government, has started to surface now and again. On occasion the Courier Mail attempts to implant in its readers' heads the boneheaded populist suggestion that the public are somehow bound to turn on whatever Government is in power in an economic crisis, as if venting their rage on that Government will somehow improve their situation regardless of that Government's responsibility for the problem.

An article describing similar opportunism is "The Courier Mail's populist hypocrisy on fuel excises" of 24 Jun 08.

Recent letters to the editor in the Courier Mail (16 Oct 08 - see above) seem like an attempt to rehabilitate the tattered reputation of the Howard Government. We should be aware of the mass media's ability to redraft history. By playing up the Howard Government's alleged achievements and downplaying its unpalatable side, the media could create a situation where a return to the political leaders of that era could seem more acceptable as the economic and financial crises make their impact felt on ordinary Australians.

The much ballyhooed budget surplus that the Courier Mail's two readers wrote about was due almost entirely to the Howard Government being able to reap the benefit of the mineral resources boom. This 'boom' was exploited at the expense of our own environment, the global environment, and future generations, whose endowment of mineral wealth is now being flogged off by today's selfish wealthy elites. Other Howard Government deficits the Courier Mail will almost certainly neglect to remind its readers of include:

However well or poorly the Rudd Government measures up to the very serious challenges before it, the Courier Mail readership should not be fooled by propaganda implying that either Howard or his successors would be better able to meet those challenges.