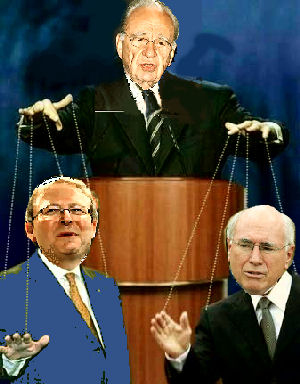 In recent years, newspapers of the Murdoch-owned News Limited media empire haven't been in the least shy in counselling, indeed demanding of Governments to disregard the will of the public to implement policies it deemed to be in the public's best interest. One obvious example which springs to mind is the Australian's strident endorsement of the current attempts by the Iemma Government to privatise NSW's electricity assets, even though it's opposed by 85% of the public and even though when privatisation was last specifically put the the NSW public in the 1999 elections by the Liberal Opposition they were roundly trounced. Other past examples include the Murdoch press's campaigns for:

The editorial Protection in name of popularity of 26 Feb 08 in the Murdoch-owned Courier Mail concerning Bligh's decision to save the Regent Theatre, complained:

But is it possible that this whole exercise is less about protecting fond memories and more about good old-fashioned, politically motivated playing to the crowd?

However on other occasions, when it suits the Courier Mail editorial writers, “playing to the crowd” is precisely what they demand of our political leaders. Take for example the editorial Rising costs an expensive issue for PM of 23 June.

The editorial seems to be part of a growing pattern in the Murdoch Press which appears to be directed towards undermining the popularity of the Rudd Labor Government in the face of the growing global economic and resource shortage crises. Even though the current Federal Government cannot possibly be held responsible for these and even though the Federal Opposition is not proposing policies to deal with these which are likely to cope any better with these crises than those being implemented by the Federal Government, the Murdoch press appears to be attempting to engender the idea in the Australian public's consciousness that it is appropriate for them to automatically punish whatever Government in office when things turn sour. So stories and opinion pieces such as this editorial, which seek to imply that the Rudd Government's honeymoon with the Australian public is over are becoming more common.

The editorial begins by noting that more people now consider Labor (53%) to be better economic mangers than the Liberal opposition(37%).

But on other indicators Labor is found wanting. Almost 70 per cent, for example, feel Mr Rudd "should have done more" in his first Budget to alleviate cost of living pressures. And if increasing mortgage repayments, rents and groceries are biting hard into household budgets, the soaring cost of petrol must surely hurt the most.

Startlingly for Labor, three out of four Queenslanders are dissatisfied with the way Mr Rudd has handled petrol prices. More worrying for the Prime Minister will be the finding that two out of three Queenslanders support Opposition Leader Brendan Nelson's plan to reduce petrol prices by cutting fuel excise. …

As the editorial noted, Labor had dismissed the proposal as economically irresponsible. The editorial made no attempt to prove otherwise, but, nevertheless, proceeded to argue that Labor should adopt Nelson's proposals all the same.

Whilst it conceded that “Most Queenslanders don't blame Labor for rising fuel costs.“ it nevertheless maintained that Labor needed to be seen to be doing something, no matter how futile or counterproductive in the longer term. Here are its words:

… all Australians nonetheless expect their newly-elected government to do something tangible about inflation that sees real prices coming down, especially in - if nothing else - petrol.

Australians might also wonder what happened to the human sensitivity that Labor demonstrated last year in opposition. When Mr Rudd talked passionately during the campaign about the cost of petrol, housing and food, voters listened intently, with many switching their support to Labor on this message alone. But in the past six months the Prime Minister appears to have blunted his finely-attuned antennae. And, semantics aside as to what Mr Rudd actually promised on food and fuel, Australians now expect the Prime Minister to act decisively on bread-and-butter issues.

So the Courier Mail is apparently demanding of Rudd that he “act decisively” even though such ‘decisive’ action could well deny the Government millions in necessary revenue whilst having almost no significant effect in comparison to the price rises caused by the increasing scarcity of petroleum.

… while a deteriorating economy is in itself unlikely to prise Labor from office after a single term, Mr Rudd should know he will be punished if voters believe that he failed to act on the cost of living when he at least had the chance.

The audacity in this is breathtaking. The editorial writer knows full well that it is within the power of his/her own newspaper to make the Queensland public understand why such band-aid measures as proposed by Brendan Nelson would be harmful to its interests. If the Courier Mail was truly serving the public interest, it would do its utmost to ensure that a Government that acted economically responsibly would not be punished by the public for having done so.

MP Hockey proclaims: "Petrol will always be cheaper under the Coalition than it will be under the Labor Party."

What is Hockey smoking??? I hope he shares it with the rest of us "average Australians"!