The Conversation claims "Academic rigour, journalistic flair," but is it just another agent of the Mainstream News affair complete with a mainstream news (MSN) editor, renowned by some for her incredibly boring political reporting which has put generations of Australians off politics in a great service to the elite? Unsurprisingly, the Conversation article, "White House under siege as scandal follows scandal – and it won’t end any time soon," by Kumuda Simpson, Lecturer in International Relations, La Trobe University repeats the scuttlebut that passes for political comment in the mainstream media, citing CNBC, the Washington Post and all the usual propaganda suspects. Far from encouraging the deep questioning and analysis one once expected of a university lecturer, Simpson is simply transmitting a flimsy political claim that President Trump should not carry on useful discussions with Russia about war and terrorism and Syria. Failing to present the other side, Simpson asserts that Russia cannot be trusted because it prefers to keep the Assad government (which he misnames a 'regime') in power, 'despite ongoing atrocities', which incredibly harmful allegation Simpson backs up by citing the latest egregious beat-up chorus against the Syrian Government as carried by the New York Times rag. ("Syrian Crematory Is Hiding Mass Killings of Prisoners, U.S. Says"). Candobetter.net Editor: UPDATE: Greg Wood's comments on the article discussed here were later all removed by the site editor. He is awaiting an explanation.

Comments under the article trended into a discussion about the validity of the MSN vs the 'alternative press', leading me to my analysis below. Phil Chamberlain's comment seemed typical of the fallacy that the official mainstream news is 'real news' because it uses 'real reporters' instead of opinion and that alternative news-sites are only opinions, which people use to confirm their own biases:

This statement was written on The Conversation in rebuttal to another commenter who cited lack of faith in the mainstream media (MSM) and had the poor judgement to seek (as described by Mr Chamberlain) 'nutjob' info at 'dodgy' sites. Another commenter replied to this statement with some derision and pointing out that Murdoch and his media-magnate ilk exercise editorial control.

In fact the realm of journalistic control is huge and frighteningly pervasive.

When I read the statement that the MSM is 'proper journalism' and 'will investigate facts and call to account', I felt that oddly conflicted reaction that is all too frequent these days - laugh out loud nausea. It occurs when confronted with ridiculous notions that enable horrific contingencies to unfold.

It is not just Murdoch et al defining their journos’ agenda and editorial content. It has now compounded into self-censored homogeneity of editorial via a pervasive sense of ‘echo-chamber’ peer regulation. The journos are now so imbued with auto-recognition and compliance to their own ‘chook-house’ narratives that they’ve lost touch with real world facts and interpretative rigor.

The key elements sustaining the delusion seem to be a) the use of select facts at the persistent exclusion of others (disobedient facts) that are just as or even more critical to the matters at hand, and b) the interpretation of those select facts through a narrow premise base that remains unexamined for breadth or merit whilst being inculcated to the herd (of journos and thence the public) via its ceaseless implicit and explicit repetition.

Examples of assumption that are embedded and beyond examination include: “Russia is a global aggressor”; “Russia hacked the US election”; Mass, industrial scale migration and migration per se are the same thing; Far Right = opposition to (mass) immigration; that populism is bad, which by direct implication decrees that only the political/economic elite and their paid technocrats know what is good for us all. This utterly oversights the demonstrable premise that the elites have a globalised common interest that does not natively intersect with the ‘locals’ in any given area, thus the locals are ultimately dispensable in pursuit of the ‘common good’. (What a tortured concept that has become when measured at a national let alone global scale).

Examples of critical facts that are routinely ignored include: the benevolent outcome delivered in Crimea compared to the conflict in the Donbas; the fascist, CIA backed coup that gave Russian no choice but to act as it did; the fact that the Crimea is traditionally and until very recently was, Russian, and, in accord with this, Russia had international approval to station up to 20,000 military personnel in Crimea - accordingly it did not ‘invade’ Crimea; that Russia annexed Crimea when in fact the Crimeans voted overwhelmingly to become an autonomous republic within the Russian federation; the US and EU sanctions of Russia for this falsely alleged ‘annexing’ are illegal under WTO rules; that the US would go absolutely apeshit if Russia did in Cuba what NATO (the US) is doing in the territories bordering Russia; that cheerleading the downfall of Assad is exactly what has delivered Iraq and Libya into the toilet; that many of Marine Le Pen’s economic policies are in fact leftist - but she is ‘far right’ solely due to her rejection of the globalist agenda of open borders and mass migration. The latter is prime example of a macro(n) smear utilised to avoid merit-based debate on the highly vexed topic of mass migration as an economic tool to furnish elite advantage at the expense of local populations.

This linked video linked provides a concise and ultimately dangerous example of such wilful MSM delusion.

It presents Putin engaging a roundtable of western journos and directly challenging them to listen to him about the obvious but steadfastly ignored facts regarding who indeed is the geopolitical aggressor - Russia or the US? He clearly states that he does not expect them to report his factual position to their readers and he asks what will it take for them to listen - WW3?

The MSM deal with facts and investigation? What is the emoji for ‘rolling on the floor vomiting my guts up’?

The most relevant and/or most incisive articles and video or audio broadcasts will be linked to from this page. Sites that will be linked to include the Russian news services, RT and Sputnik International, the Iranian PressTV news service, the English translation of the independent French Voltaire Net, the English translation of the Syrian Arab News Agency (SANA), the independent Canadian-based Global Research and other independent sites LandDestroyer and PaulCraigRoberts.org.

Don't miss the Video inside if you want to know what is going on between Russia, Crimea, Ukraine and the US allied forces! It's great to see women profiting from the internet intelligently and finding a place for themselves on the international media without needing to kow-tow to any particular country or the corporate media or a bunch of bloke-bosses. Syrian Girl is an impressive, self-managed commentator and analyst on Syria, who has created her own excellent reporting service. She has earned respect from powerful people, known and unknown, all over the world and obviously gets information from many different sources. Syrian Girl is one-woman education service on Syria today. Now she has introduced the world to "Ukrainian Girl", whom she interviews in this video about what is going on in Ukraine. Good on you Ukrainian Girl! Most readers will find Syrian Girl's questions to Ukrainian Girl helpful in understanding where East, West and 'south' (Crimea) Ukraine fit in the world, politically and historically. The interview is followed by an extremely useful and well edited illustrated analysis of the extremely poor behaviour of the US-aligned forces in Eastern Europe and the Middle East. Although Syrian Girl is aware of oil pipelines in this region, she does not go into it here. She does touch on it in this article by Adrian Salbuchi about her on Russia Today. This report puts the the ABC, SBS and of course the Murdoch and Fairfax Press and the Australian government foreign policy to shame. 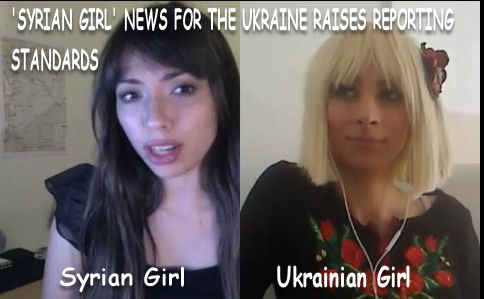