This program from Press tv Iran is interesting and useful in bringing us up to date. Iranians know a thing or two about oil production and the oil market. The issues of peak demand and peak production are very hard to estimate and no-one here pretends to have the answers, but a number of factors are canvassed, including US President Trump. As usual, however, in such programs, population growth and economic growth are skirted around. Similarly, increasing efficiency among OECD countries is taken as a given, and increasing consumption among 'developing' countries is also taken as a given. The elephant in the room is, of course, when does peak demand meet peak production.

The global demand for oil is predicted to be rising at least for the few coming decades.

The projection stems from several factors. One of the major reasons is the expectation of a drastic rise in the number of vehicles on the roads.

Economic Divide caught up with Dr. Ali Shams Ardekani to discuss the future demand of oil. He should know a thing or two about the oil industry. He serves as the President of the Iran Business For Future.

The antagonism towards Russia by U.S. media and foreign policy elites goes far beyond allegations of Russian interference in the U.S. elections. Paul Jay of The Real News interviews

Recording of a timely and important interview with Tony Kevin, author of Return to Moscow UWA 2017. As a young Australian diplomat, Tony Kevin visited Brezhnev's Soviet Union in from 1969-1971. He returned on official business in 1985 when Chernenko was in power, then again, very briefly, in 1990. During these times he was not able to get to know the Russians due to the policy of both governments against fraternisation, thus Russia ironically became a source of growing fascination for him. He continued to inform his fascination from many sources, always at a distance. Concerned today by the threat to peace from US-NATO anti-Russian propaganda, and more fascinated by Russia than ever, he returned on his own to Russia (no longer the Soviet Union, of course) in 2016. Return to Moscow examines past and present attitudes to the people of Russia and to its leaders through empathic eyes and an understanding of the change in geopolitics from cold war to US interventionist.

Lada Ray reports that Russia will stop transporting gas to Europe via Ukraine and redirect it through Turkey. She also describes Ukraine activities leading up to renewed war on East Ukraine, with the US, France and Poland having agreed to supply advanced arms to Ukraine. In addition, two ships, one from Australia and one from Canada docked in the Odessa port in the past week to two. Each was full of winter uniforms for the Ukraine army. The following article is from Lada Ray's English language blog at https://futuristrendcast.wordpress.com/2015/01/15/confirmed-russia-to-stop-transit-of-gas-to-europe-through-ukraine/

While mainstream press is only reporting that Turkey's Prime Minister Recep Tayyip Erdogan, blocked twitter, the reason he did so goes unreported. Yet that is the most interesting and shocking thing: A leaked conversation between Turkey's intelligence chief and the war room reveals plot to create a casus belli for war with Syria by using ISIL, an alQaeda offshoot, to threaten a turkish shrine Suleiman Shah Tomb. Turkey has blocked youtube in order to cover up the leaks. Turkish Foreign Ministry confirmed the recording of planning for a military incursion into Syria adding that a 'network of treason' was responsible for leak. Part two of the leaked conversation implicates John Kerry US secretary of state in the plot.[1] Retitled from original title which was, " EXPOSED: John Kerry, Turkish PM and Co implicated in Turkey False Flag Using AlQaeda To Start War With Syria".

The The Final Energy Crisis (2nd edition), Pluto Press, UK, 2008 is a book like no other on the topic of energy and peak oil of which I am aware.

It went well beyond the usual formulaic basics and it satisfied my appetite for stimulation rather than repetition and reinforcement. It is designed to be read in parts and in no particular order. However, nearly all of the articles are a subject in their own right, to be absorbed and considered slowly. The sections and chapters are:

Part I: Measuring Our Predicament

2. 101 Views from Hubbert's Peak by Sheila Newman
3. Prediction of World Peak Oil Production by Seppo Korpela
4. The Assessment and Importance of Oil Depletion by Colin Campbell
5. Coal Resources of the World by Seppo Korpela

If we take a flashback view on “official forecasts” from one year ago – in June 2007 – the unreality of those Cheap Oil Hopes jump from the page. While the OECD’s IEA is mutating quite fast into a Peak Oil friendly organization, able to admit that future oil supplies will not meet likely or probable demand, the US EIA and other diehards, ironically including the OPEC Secretariat and its far out underestimates of world oil demand growth, have not yet made that cultural revolution.

The chart below, from the US EIA’s June 2007 forecast, which for natural gas set a truly unreal forecast or wish-list 2008 average price, Henry Hub, of about 7.40 USD/mln BTU, is typical of how far out of line from reality some of the ‘official forecasting’ fraternity has got. For 2007-2008, the US EIA in June 2007 was hoping, very hard, the upward price spiral for oil was going to be trimmed back, to highly moderate, almost zero growth of average prices. 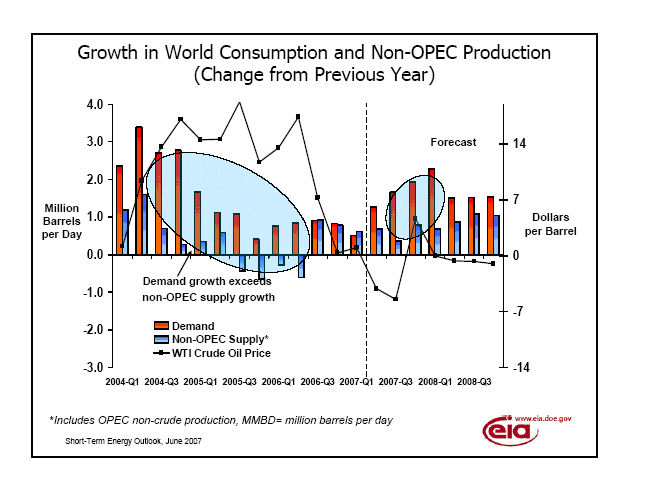