The “new” plan sets a target of capturing 333 minke whales annually as part of a 12-year-long research effort "to achieve conservation of [Antarctic marine ecosystem] resources while pursuing their sustainable utilization and to understand and predict the effects of factors such as climate change."

"After giving serious scientific consideration, it has been concluded that age data at the annual scale can be obtained only through lethal sampling methods, and thus lethal methods need to be employed under this program," the plan said.

Fourteen activists from the hardline animal rights group Sea Shepherd, including an Australian, were arrested in Denmark’s Faroe Islands while trying to halt a dolphin "hunt".

Rather than a "hunt", the animals were help captive and were callously slaughtered without escape. They were arrested on the island of Sandoy while attempting to save a pod of 33 pilot whales — members of the dolphin family — which were being driven toward shore to be slaughtered. Islanders drive pilot whales and other dolphins into shallow bays, where the animals are butchered to the cheers of locals watching from shore. This is justified coldly as "tradition"!

Among them was Krystal Keynes, from Western Australia.

Faroese whalers support the atrocity of mass killings of whales by claiming that whaling in the Faroes stretches back to the earliest Norse settlements more than 1,000 years ago, and hunts date to at least the 16th century. The method of slaughter involves the whales being forced into a bay by flotillas of small boats before being hacked to death with hooks and knives! Many locals defend the hunt as a cultural right, but animal rights campaigners have denounced it as a "brutal and archaic mass slaughter".

Sea Shepherd has denounced the hunt as brutal and archaic, and this year brought celebrities to the North Atlantic islands to cast a spotlight on the practice.

Environment Minister Greg Hunt justified the downgrade of a customs vessel to a plane to monitor Japan's illegal whaling, saying that "we want them to be aware that there will be monitoring – independent monitoring which from an aerial position can take independent vision of what occurs.''

There's no scientific or economic justification for Japan's whale slaughter in the Southern Ocean, where they are internationally protected. We already know what Japan plans to do in the Antarctic.

University of Vermont whale biologist, Joe Roman and his colleague James McCarthy from Harvard University have discovered that most whales actually deposit waste that floats at the surface of the ocean as a "very liquidy, a flocculent plume." 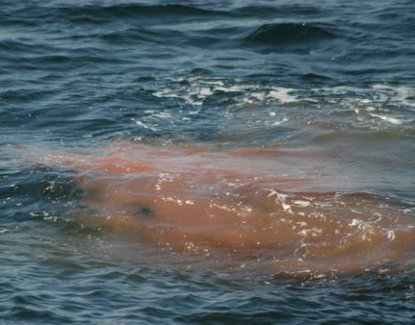 Whale poop doesn't sink to the bottom of the ocean. The Harvard studies have shown that whales play an important role in transporting nutrients from where they feed, in deep waters, up to the surface, where they  fertilize tiny, floating plants called phytoplankton.

Japanese whaling pirates raiding Australia's southern whale sanctuary every year poach all the whales they want, spin their exposed lie of scientific research to a complicit whaling commission bureaucracy that must exist only for the club sandwiches at meetings.

And what has Rudd-the-Dudd done to protect Australia's southern ocean and indeed its sovereignty from raiding Japanese poachers arriving from some 10,000km to the north? Squat, except publicly froth and bubble yet with no action like all his other core and non-core populist empty promises.

Sea Shepherd, in its Antarctic Whale Defense Campaign, has been doing Australia's Naval border protection job for Australia's regional oceans. It's defence vessels, the Steve Irwin and Bob Barker have recently completed their sixth voyage to the Southern Ocean Whale Sanctuary to oppose the illegal whaling activities of the Japanese whaling fleet.

The original Parties to the Treaty were the 12 nations active in the Antarctic during the International Geophysical Year of 1957-58. The Treaty was signed in Washington on 1 December 1959 and entered into force on 23 June 1961.

The Governments of Argentina, Australia, Belgium, Chile, the French Republic, Japan, New Zealand, Norway, the Union of South Africa, the Union of Soviet Socialist Republics, the United Kingdom of Great Britain and Northern Ireland, and the United States of America, recognizing that it is in the interest of all mankind that Antarctica shall continue for ever to be used exclusively for peaceful purposes and shall not become the scene or object of international discord.

The now 47 Antarctic Treaty nations represent about two-thirds of the world's human population.
Article I
1. Antarctica shall be used for peaceful purposes only. There shall be prohibited, inter alia, any measure of a military nature, such as the establishment of military bases and fortifications, the carrying out of military manoeuvres, as well as the testing of any type of weapon.
2. The present Treaty shall not prevent the use of military personnel or equipment for scientific research or for any other peaceful purpose.

Whale fall is the term used for a whale carcass that has fallen to the ocean floor. When a whale dies in shallow water, its carcass is typically devoured by scavengers over a relatively short period of time—within several months. The carcass can provide sustenance for a complex localized ecosystem over periods of decades. Many whales die when female whales or newborns, stressed by the process of birth, make their annual migration.

In 1987, a manned submersible called Alvin was making a routine dive along the muddy plains of the deep sea when its pilot spotted what he thought was the fossilized remains of a dinosaur. Instead of an exotic underwater beast, it turned out to be the 21-metre-long skeleton of a blue whale. Just as windfalls deliver a sudden bounty of ripened fruit, whale falls see the death of a whale bring a host of nutrients to the sea floor.

The falls are few and far between, and difficult to track and study, but researchers are learning ever more — sometimes through extreme measures — about the new species to be found among the remains.

Scientists now estimate that a whale-fall community can survive for up to a century by sucking the fats and sulphides from these bones. In fact, one cadaver offers the same amount of nutrients that normally sinks from the surface to the sea floor in 2000 years, and this is of great benefit to innumerable species. 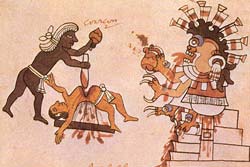 The primitive Mexicans, before the appearance of the Virgin of Guadalupe, used to sacrifice people and take out their beating hearts as a “tradition” to honour an Aztec god! Aztec religion had lost its focus by 1531. The Aztecs offered annually at least 20,000 men, women and children in human sacrifice to their gods. In 1487, just in a single 4 days long ceremony for the dedication of a new temple in Tenochtitlan, some 80,000 captives were killed in human sacrifice. “Tradition” is no excuse for cruelty, sacrifice, barbarity and evil!

THESE PICTURES HAVE TO BE SEEN AROUND THE WORLD. THERE IS NO CRUELER BEAST THAN MAN!

Whaling in the Faeroe Islands has been practised since 1584. It is regulated by Faeroese authorities but not by the International Whaling Commission as there are disagreements about the Commission's competency for small cetaceans. Around 950 Long-finned Pilot Whales (Globicephala melaena) are killed annually, mainly during the summer.

Thousands of whales lethally "researched" by the Japanese has allowed them to draw the most startling conclusion; that "Antarctic minke whales are fast growing thinner"! The massive exploitation of krill as a protein source and as an animal-feed additive may now be jeopardizing recovering whale populations dependent on krill as a food supply. Since the 1970s the numbers of krill have declined by 80 percent, largely due to global warming. Fishing operations are adding to the depletion. These tiny crustaceans eat carbon-rich phytoplankton near the surface of the water, and thereby help remove carbon dioxide. After dark these amazing little animals send waste - which includes large amounts of carbon dioxide from the Earth's atmosphere - toward the sea floor and thereby removing the equivalent annual carbon dioxide emissions of 35 million cars! If krill are essential to a healthy ocean ecosystem and the processing of greenhouse gases, the Japanese should cut back on harvesting krill instead of killing the victims of their decline - the whales! Any Japanese criminal whaling fleet entering the Australian Antarctic Territory should be arrested, and their fleet impounded.