The “new” plan sets a target of capturing 333 minke whales annually as part of a 12-year-long research effort "to achieve conservation of [Antarctic marine ecosystem] resources while pursuing their sustainable utilization and to understand and predict the effects of factors such as climate change."

"After giving serious scientific consideration, it has been concluded that age data at the annual scale can be obtained only through lethal sampling methods, and thus lethal methods need to be employed under this program," the plan said.

Wildlife is protected in the Antarctic, and the “sustainable utilization” is illegal! How is the word “sustainable” measurable when whales are intelligent, peaceful, and social marine mammals with high intrinsic value. 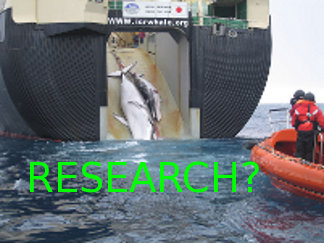 (A whale and a calf being loaded aboard a factory ship, the Nisshin Maru. The sign above the slipway reads, "Legal research under the ICRW")

Thanks to inactive governments, and ineffective politicians who've failed over and over again to directly end Japan's criminal and illegal commercial whaling. It's the science of absurdity, a pretence of “science” when it's really killing protected species and an environmentally sensitive, protected zone- the Antarctic.

This "research" is about promoting commercial whaling, not science or conservation!

Ostensibly Japan aims to obtain more precise information on minkes should the moratorium on commercial whaling ever be lifted and a quota system re-introduced, and to investigate the Antarctic marine ecosystem. So, in case the moratorium is lifted, they killing will will finally be legal and they will be ready to lift their "research" veil and start fully-authorised legal whaling in the Antarctic Whale Sanctuary.

Wrongs need to be nipped in the bud, not allowed to fester and give criminals greater audacity and confidence! Inaction is as good as endorsement of crimes. The International Court of Justice condemned Japan's illegal whaling, but that hasn't stopped the whaling. Japan is just using the "research whaling" loophole to an even greater extent, to keep it within the limits of the ban.

Despite initially committing to respect the World's International Court of Justice's judgement, the Government of Japan and Prime Minister Shinzo Abe days later announced a sort of “back-to-front about-face,” defiantly declaring that Japan would return to whale killing around Antarctica after a one-year – with a new research plan and rationale!

Despite the new rationale, it's actually still thinly disguised commercial whaling, that they want or need to kill whales, develop the research plan and rationale later and then ignore international institutions and processes that might impede your “scientific slaughter”.
"This is is the same tired old plan to kill whales under the guise of scientific research," Mr Kindleysides of the Australian Marine Conservation Society said. "Prime Minister Tony Abbott must tell Japan this is not acceptable."

The amount of whale meat stockpiled for lack of buyers has nearly doubled over 10 years, even as anti-whaling protests helped drive catches to record lows. More than 2,300 minke whales worth of meat is sitting in freezers while whalers still plan to catch another 1,300 whales per year. Japanese have lost their appetite for whale meat!

The only reason for Japan's insistence on using harpoons on the Antarctic's majestic whales is to continue their warrior heritage and defy the West, and ensure they have a global export market in whale meat while the rest of the overpopulated world suffers from food insecurity!

It’s a matter of territorial rights, and infiltration of what they see as an international resource. The Antarctic is an open sea that everyone is entitled to its rich resources - and Japan is ensuring their presence and their "right" to it's riches.

The Age: Japan to expand it's Antarctic whaling area

In the latest report, Australian scientists will work with international scientists who helped the International Court of Justice find the previous Japanese program illegal. Surely such a thin scientific facade will easily exposed?

The MV Sam Simon is one of four ships in the anti-whaling fleet of the Sea Shepherd Conservation Society. It’s a fearsome-looking vessel, in a paint job of grey camouflage and a toothy shark’s jaw. Simon is the legendary writer with a long list of credits to his name, best known for his work on The Simpsons. But in the past few years, his reputation has been growing as an aggressive philanthropist, escalating his giving after a terminal diagnosis of colon cancer. He’s also been making some notable gifts to raise hell for those who would abuse animals. The Australian government over the years has consistently broken promises to the Australian public with regards to our "anti-whaling" policy, however it has only been Sea Shepherd that have kept their promise to the whales, to the Australian public and the whale-loving people of the world." "We as humans have forgotten the interconnectedness we have to nature and to all life on this planet. As we overfish the oceans and decimate entire families of dolphins and whales at a time, we are destroying the ocean along with them -- an ecosystem that we ourselves need to survive. There are many children, who don't want to see that happen, and they will lead the way, but we all have to do our part and the time to act is now. Sea Shepherd is not just defending the oceans, but safeguarding nature and the planet for future generations," remarked a determined Simon.