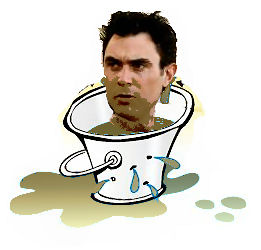 On Wednesday, 12 August 2009 the Victorian Parliament Upper House passed a motion moved by the Liberal Nationals Coalition to disallow parts of a water regulation which would have seen the Brumby Labor Government break key water promises.

The Coalition’s disallowance motion was supported by the Greens and DLP member Peter Kavanagh.

Order would have breached committments regarding Foodbowl Modernisation Project

(The Foodbowl Modernisation Project has problems of its own - see articles.)

Topher (Chris Field ) gives both barrels to John Brumby and Tim Holding's very CLEVER North - South pipeline. "We have an un-elected premier building a pipeline we voted against which takes water from people who dont have any and pipes it to a city that has other ways of getting more water cheaper."

Plugger here. Our group ‘Plug the Pipe’ is the agri-environmental group trying to stop the north south pipeline. This pipeline will remove water from the Murray River and rural communities and pump it to Melbourne in a time of extreme crisis. The North South Pipeline will connect a further 4 million people to the Murray. Every non labor political party is opposed to is construction. Independent Nick Xenophon, the Coalition and the Greens have been most supportive of our cause. It is probably a story in itself to have this sort of unity about such a contentious issue.

A young film maker from Melbourne (Christopher Field ) has taken it upon himself to research and produce a YouTube video highlighting our cause from a rural perspective. The video is funny, clever and hard hitting. If you enjoy this clip, then please pass it on. 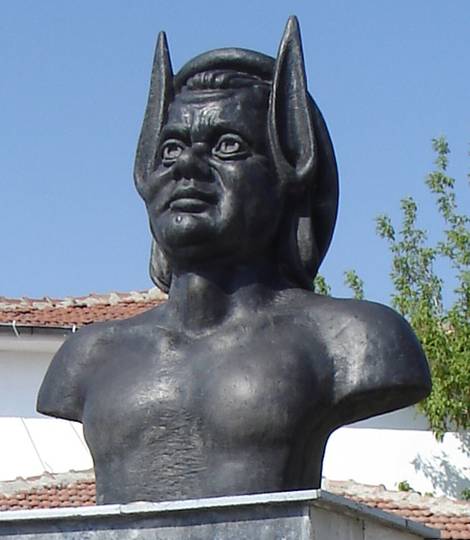 (Illustration: Statue of King Midas who turned water to gold and nearly died of thirst, but later became a worshipper of Pan and nature.)

Brumby's insistence on the north-south pipeline is his idea of listening to his constituents? His main interest is in bending to corporations who want to continue to cram more and more people and developments into Melbourne and its surroundings urban areas. His bullying and determination to go ahead despite the voices condemning the pipeline, and the fact that it would be trespassing on private land, shows that he is drunk on power and greed.

An article by The Age's Peter Ker in last Wednesday's newspaper has provided some illuminating comments from Premier John Brumby during the lead up to the Council of Australian Governments (COAG) confrontation with the hapless Penny Wong. In that article the Premier pledges to stand up for Victorian farmers and to resist pressure from other states to lift the 4% trading cap on water within Victoria.

He is reported as saying:

I wonder if the Premier realised what he was saying here in terms of his mindless push for billions of litres of water to be extracted from the very same farmers and the Murray River catchment each year.

After construction, the North South Pipeline may be pumping dust by the time it is ready to turn on in 2010.

It is also quite clear that this statement is an acknowledgement that the Premier's "New Water", or water derived from so called Goulburn Valley irrigation "savings" cannot be achieved because there is no water to save. To be viable, the Foodbowl "savings" plan requires 900 GL of losses from the irrigation districts per anum. This year the irrigation districts lost a record low of 380 GL voiding the saving plan and with the onset of worsening conditions, it is bound to be even less this year. After construction, the North South Pipeline may be pumping dust by the time it is ready to turn on in 2010. Other Brumby built pipeline infrastructure may achieve this much earlier.

This year, if conditions do not improve, Bendigo and Ballarat will not have any water to pump through the Goldfields Superpipe as they have the same water security as irrigators. Currently irrigators have a zero allocation and hence so does Bendigo and Ballarat. The water shortage has been so severe last season that the government granted Bendigo 10 of the 30 billion litres from the Eildon Dam's Environmental Reserve. This water is normally used to protect the rivers in the Murray Darling Basin against dangerous Blue Green Algae blooms that can occur when the river system has low flows.

The Brumby Government intends to accumulate a proportion of Eildon's environmental reserve water using a process known as "carry over" because it was acknowledged in early pipeline planning stages that the irrigation "savings" would not be available in sufficient quantities until 2012. This timeline is now unlikely to be met, however this means Bendigo, Ballarat and Melbourne will be dependent on the environmental reserve water and in competition for it.

What does all this mean for the Murray River? Just another aspect of how flawed the North South Pipeline is, that's what. The environmental reserve was created in wetter times and could possibly help in the Murray Crisis this year, but no, the Brumby Government, not content with just stealing water from irrigators, has reached a new all-time low.

How can the Murray be helped? Abandon the NS pipeline, leave Eildon's environmental reserve water to the Murray Darling Basin or Bendigo and Ballarat which are in a crisis, use the little water savings from the irrigation modernisation to help farmers and increase the flows of the Murray River.

The North South Pipeline will make the Murray River drier, Melbourne's extraction of 75 billion litres from its system is equivalent to building a new dam the size of the Tullaroop Reservoir. The water savings plans will also remove futher billions of litres of water from the Basin. The government's water plans are going to make the water crisis much worse for Bendigo, Ballarat, the Murray Darling Basin and rural communities. It is time for the Brumby government to stop its spin and start to address the water crisis in a responsible manner.

Sources:
Brumby ready for stoush over water by Peter Ker and Paul Austin, July 3, 2008, The AGE at http://www.theage.com.au/national/brumby-ready-for-stoush-over-water-20080702-30om.html?page=-1

See also: I will govern for all Victorians (caveat: but only if you are powerful and connected) of 26 Jun 08, Melbourne protests mass population growth and its profiteers of 7 Jul 08, Grave concerns: new state residential zones and loss of council planning powers in Melbourne of 7 Jul 08.

Yesterday the people of country Victoria placed a full-page colour advertisement in the Herald Sun newspaper voicing opposition to the proposed North South Pipeline. When questioned in Parliament about the advertisement Premier Brumby said:

This statement is most telling and illustrates the Premier is out of touch with what mainstream Victoria is thinking and implies your voice does not matter unless you are powerful or connected.

Mike Dalmau said in response to the Premier's statement, “He just does not get it, the average Victorian just does not want or believe in the North South Pipeline. The Premier may be able to lock himself away from his backbenchers but he certainly will not be able to do that when the people speak at the next election. It is quite clear to me that the Premier's arrogance is reflected in today's poll results.”

Who was on that list? Average Victorians, a retiree, Victoria's largest family irrigation farm, one of Victoria's smallest family irrigation farms, an eminent scientist, a family trucking company, a small motorbike shop, a family milk processing company, a well respected environmental group and the list goes on. No doubt the Premier's comments will further enrage the anti-North South Pipeline sentiment in the country.

www.abc.net.au/news/stories/2008/06/03/2263099.htm More than 1,000 members of the Country Women's Association unanimously backed a motion urging the State Government not to proceed with the project at a recent conference.

www.starnewsgroup.com.au/story/58735 8 May 2008 : At its State Council, the Municipal Association of Victoria (MAV) councils overwhelmingly supported a motion calling on the state to re-think the North South Pipeline.

www.electedgreensvictoria.org.au/speech.php?speech=349 The Greens, Greg Barber MLC, Plug the pipe and make with the flow of water information.

Extract : The Victorian Government remains under pressure over public transport, and its water policies - pipelines and desalination - have come under attack from the Left and Right flanks.