Centre for Population and Urban Research

Monash University's Dr. Bob Birrell of Monash University Centre for Population and Urban Research spoke at the Sustainable Population Australia AGM on July 20, 2013 to a conference center packed to standing room only. The speaker was retained for questions until long after the end of the talk. "It was chilling the way Dr Birrell calmly and factually revealed the deep globalised shit we are in. It just doesn’t make sense at all. If only the public understood what is being done to them and their children...not to mention our environment." Videos by Steven Armstrong.

The meeting yesterday was well summed-up by one of those present as a “rip snorter”. The room was filled to capacity with standing room only. The mean age of the audience was substantially reduced on previous AGMs, an indication of how the effects of overpopulation are hitting more and more people in the form of unavailable, unaffordable housing, massive power bills, congestion and stress at every level ... and unemployment.

One gentleman slapped a wad of 10x $10 notes on the table at the beginning of the branch meeting and people seemed keen to give money to help SPA.

"It was chilling the way Dr Birrell calmly and factually revealed the deep globalised shit we are in. It just doesn’t make sense at all. If only the public understood what is being done to them and their children. ..not to mention our environment." (A new SPA member).

The notes below were taken by a member of the audience and are an impressionistic paraphrase of some highlights of Birrell's speech. You will need to watch the videos of the speech for detailed quotes.

Bob Birrel in calm measured tones revealed the treachery of our governments to Australians especially workers.

The latest population increase was 370,000 people, representing a growth rate of 1.7%. This increase was made up of 210,000-215,000 permanent entry including humanitarian. It included temporary entry e.g. 457 visas and working holiday visas. About 30,000 people moved here from New Zealand (but not all were born there; many migrated there from elsewhere.) Natural increase (births over deaths) made up 150,000. That makes a huge excess of immigrants over native born, to the tune of 150,000: 270,000.

Snapshot - In December 2012 the ABS calculated that there were 1.1 million temporaries here. Most temporary visa holders have work rights. Visitors don't have work rights but many work anyway. This is all on top of the permanent entry people, numbering about 210,000- 215,000.

Rate of workforce growth has declined sharply. During the mining boom it grew by 200,000 but this has halved- leading to an increase in unemployment.

Our Youth disadvantaged by immigration levels:

50-60,00 young people seek entry level jobs each year. Immigrants competing with them for these. There has also been a drop in workforce participation.


This is the CFMEU billboard Dr Birrell refers to: "In the 12 months to February 2013, Australian construction industry employment grew by only 1.1%, but the number of 457 visa holders employers had working in the industry actually increased by 25% to 14,080. Between December 2012 and March 2013, trades apprenticeship numbers dropped from 67.500 to 53.400." 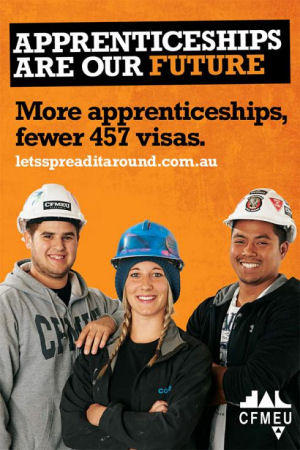 Why is ALP not decreasing the migrant program when jobs are falling and unemployment is rising?

Labor elites now tend to see themselves as globalisers, harking back to the Hawke-Keating era of deregulation. By subjecting workers to enterprise bargaining and international migrant competition they are trying to overcome a bogey they perceive in "Protectionism".

Government has pushed the selection of migrants onto employers, failing to regulate to safeguard local job opportunities. The rules don't require the employer to test the local market. All this came to a head recently over the 457 visas. The CFMEU (mining and construction union) has led the ACTU in a comeback on behalf of workers (see picture of CFMEU Billboard: "More apprenticeships, fewer 457 visas.")

Globalisers In the 1980s the ALP opened the Australian economy to globalists- to “wake up” the sleeping economy. These policies overcame our protection heritage. 457s were good news for globalising forces. CFMEU (mining and construction) were very concerned. They saw 457s as breaking their control. Chris Bowen, the current Federal treasurer is not in favour of protecting local jobs and his book Hearts and minds is apparently very revealing of his preference for the globalist ideology.

The Howard government had given away our right to this Doha conference in 2000 in exchange for tariff concessions from other countries. Rudd confirmed this when he became prime minister.

There has been a split in ALP ranks over this- Craig Cameron and Kelvin Thomson are among those who support labour market testing.

Julia Gillard said, just before she was removed, that Australians should be at the head of the (Job) queue- stated this publicly. One of the last things her government did was to subject the 457 visas to labor market testing. The new law has not yet been proclaimed, but went through on the very last day of parliament. The protections for workers are weak, but they are an improvement on the naked 457. They protect workers in trades but leave professions pretty unprotected.

Sustainable Population Australia (SPA) has called on the new Immigration Minister, Brendan O’Connor, to heed the findings of a paper issued yesterday. It found that the number of migrants arriving in Australia since the beginning of 2011 who found jobs about equals the number of new jobs created in Australia for everyone over the same period.

The paper was written by Professor Bob Birrell and Ernest Healy of the Centre for Population and Urban Research (CPUR), Monash University.

SPA National President, Ms Sandra Kanck, says this has had harmful impact on employment levels and working conditions of ‘incumbent’ Australians, particularly young people. Incumbents include migrants who arrived prior to 2011 as well as Australians born here.

“This is on top of very high numbers of temporary migrants who might also work – 457 and working holiday visa holders, students and New Zealanders. There are over one million temporary migrants living in Australia now,” says Ms Kanck.

“Australia still has strong natural increase in its workforce, with the number of people turning 18 outnumbering those turning 65 by 80,000 per year. No extra jobs were made available to those young jobseekers over the past two years. Each one who found a job left an older worker unemployed.

“As a first step, the new Minister must match the immigration program to the number of jobs available and not disadvantage incumbent Australians, especially young people. Youth unemployment in northern Adelaide suburbs is now 42.6 per cent. It is also unacceptably high in the western suburbs of Melbourne and Sydney.

“As a second step, the Minister should note that immigration makes up 58 per cent of Australia’s very high annual population growth rate of 1.6 per cent. By cutting immigration, he will reduce population growth. This is vital for preserving the environment and for many other social reasons such as reducing housing unaffordability and hospital waiting times.”