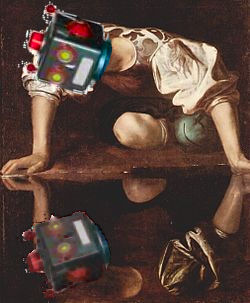 Technophilia is described in various sources as a strong enthusiasm for technology.
But what many members of our species display goes far beyond enthusiasm.

Starry-eyed technophiles go on animatedly, in what appears to be quasi-religious rapture and hyperbole, about a banquet of opportunities apparently afforded us by our technologies. All the while, they blindly ignore the fact that the horrendous problems we face were created and enabled by technologies in the first place – dead zones and enormous “islands” of plastic in the oceans, soil depletion and exhaustion, massive consumption and overconsumption of resources, emissions and air pollution, hundreds of sites on the planet and specifically in North America contaminated by radioactive waste, and the list just goes on and on.

The last item above is a typical illustration. Nuclear power, originally hyped as being safe and "too cheap to meter," is still heavily subsidized by taxpayers, and is still creating problems for present and future generations to deal with. Recent disasters aside, there are tonnes of “legacy” waste we have yet to deal with properly, as well as the increasing contamination of the North American Great Lakes and other bodies of water by radionuclides from mining and power generating activities.

Yet we delude ourselves, as Neil Postman says in “Technopoly,” with “the catastrophic idea that in peace as well as in war technology will be our saviour.” Postman goes on to say that technophiles “gaze on technology as a lover does on his beloved, seeing it as without blemish and entertaining no apprehension for the future.”

Our Sorry Record Is Proof That We Cannot Predict Consequences

And, when it comes to the future, we have already demonstrated clearly that, while we are a clever little species when it comes to inventing things, we have a very poor record in predicting the long term consequences, let alone the unintended consequences. We, in Einstein’s words, “thoughtlessly make use of the miracles of science and technology, without understanding more about them than a cow eating plants understands about botany.”
In a lovely little act of anthropocentric circular reasoning, we claim that human cleverness and intelligence are the main criteria for the job of planetary stewards, and that our technology is evidence of our suitability for that job. Then we claim that, by gosh, we’re the only species which exhibits those qualities (apparently) so we must be the natural stewards of this planet. We fake the qualifications for the job in our favour. And our performance on that job is so dismal that we should have been fired long ago. We are, after all, the only species to bring the planet to the brink of nuclear winter, runaway climate change, and collapse of ecosystem supports necessary for our own life. We are the only species to spread toxic and persistent poisons around the entire planet. We are the only species that has caused one of the “great extinctions” of other species on this planet.

Technophiles might argue that it is not technology, but the inappropriate use which is the real problem. That is a facile and denial-ridden response, as the evidence clearly demonstrates that the problem runs much, much deeper.

And all we hear about in glowing color is that more technology is the solution to our problems – the sort of thinking from the past that has created our problems in the first place. Solar panels will be our saviour. Wind power will be our saviour. Better fuel efficiency in transportation will be our saviour. Recycling will save the planet. And so on. Another quotation often attributed to Einstein sums it up nicely: “The significant problems we face cannot be solved at the same level of thinking we were at when we created them.” We must move beyond our obsession and infatuation with our own technologies, and beyond the idea that our role on this planet is one of stewardship and control. We must, in Lovelock’s words, “realize more than other green thinkers the magnitude of the change of mind needed to bring us back to peace within Gaia, the living Earth.” We must plan and execute a “sustainable retreat” from where we are.

Overcoming our own smugness and arrogance about our cleverness and about our place on this planet – overcoming our narcissistic technophilia - would be good first steps.

Originally posted at http://www.greenparty.ca/blogs/9600/2012-02-21/narcissistic-technophilia and re-posted here with the Rick Shea’s permission