George Monbiot wrote that Rio+20 is 283 paragraphs of fluff. If this is the best our world leaders can come up with, what is the solution to our global environmental crises?
We are running out of time ..... does Iceland's arrest of corrupt government officials hold the key?
What can we do next?

George Monbiot wrote that Rio+20 is 283 paragraphs of fluff.

Apparently the Obama administration tried unsuccessfully to delete 'unsustainable consumption and production patterns' and disassociate economic growth from the use of natural resources.

George Monbiot is at it again.

George Monbiot is at it again.

http://www.monbiot.com/2011/10/27/its-the-rich-wot-gets-the-pleasure/
Why does he and his ilk insist on asserting the primacy of consumption over population growth as the most critical factor toward aggregate resource liquidation and associated global catastrophes such as climate change?

BOTH conditions are the problem!!
Each one factors upon the other to deliver increasing resource depletion and system entropy.
Why waste time and public attention span arguing a false dichotomy? 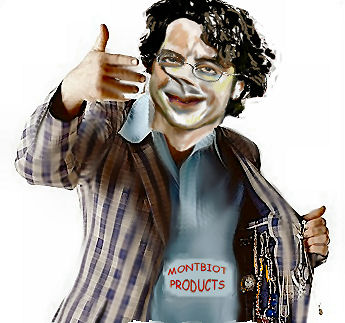 I was motivated to write the following as a disclaimer to a link to the Guardian article If you want to know who's to blame for Copenhagen, look to the US Senate of  Dec 09, linked to from the article A climate con: Analysis of the "Copenhagen Accord" of  Dec 09 by David Spratt.

George Monbiot has written a number of very incisive and damning critiques of our corrupt corporatised New World Order including "How Did We Get Into This Mess?" of 27 Aug 07, which shows how the propagandists for the doctrine, referred to as economic neo-liberalism, including Milton Friedman and Friedrich von Hayek, began to organise at a meeting at a Swiss spa resort at Mont Pelerin in 1947, and, hence became known as the Mont Pelerin Society.

This article anticipated, albeit very concisely. by a few months, some of what was published in Naomi Klein's Towering "The Shock Doctrine" a few months later.

Nevertheless, in spite of this, some serious questions hang over George Monbiot's head.

Philippe Legrain's puerile veneration of globalization and free market economics is, for its outrageous simplicity, alluring to some in the same way that Ayn Rand's uncompromising fantasies drew a cult following. His call for open borders is so boldly brazen that it disarms many of his incredulous audience in the manner that Milton Friedman or Julian Simon did theirs. But a glance at any best sellers' list will reveal that is typically those who stake out extreme and provocative positions without solid empirical foundation who attract readers and the favour of publishers. While those authors and commentators who are better informed of a broader and deeper knowledge, on the other hand, often lose their market edge because a more balanced account is inherently less exciting.

In fact, in his book review of Immigrants:Your Country Needs Them, Australian critic Mark O'Connor characterized Philippe Legrain as essentially "ill-read", "a rhetorician, not a thinker", who in his euphoric assessment of a world where mobility was unimpeded "ignores inconvenient issues of resources, spaces, greenhouse emissions and environmental degradation."

Monbiot's statement below reveals a dangerous use of arithmetic and linear thinking.

In other words, if we accept the UN's projection, the global population will grow by roughly 50% and then stop. This means it will become 50% harder to stop runaway climate change, 50% harder to feed the world, 50% harder to prevent the overuse of resources.

It is certainly tempting to throw these concepts around because we all have a tendency to think linearly (the exception being that perhaps most people now at least realize that human population growth is exponential). Unfortunately, nature rarely works in such linear ways and there are thousands of examples of non-linear responses, threshold effects, and synergistic processes that undermine simple 1:1 relationships. So, increasing population by 50% will not necessarily result in a 50% more effort required to combat climate change (or whatever). It may mean that it takes 4 times the effort or who knows, that we cross a threshold where no amount of effort will result in a desired response.