George Monbiot wrote that Rio+20 is 283 paragraphs of fluff. If this is the best our world leaders can come up with, what is the solution to our global environmental crises?
We are running out of time ..... does Iceland's arrest of corrupt government officials hold the key?
What can we do next?

George Monbiot wrote that Rio+20 is 283 paragraphs of fluff.

Apparently the Obama administration tried unsuccessfully to delete 'unsustainable consumption and production patterns' and disassociate economic growth from the use of natural resources.

The only thing to their credit was that the states to sign the draft haven't abandoned their declarations from the last Earth summit 20 years ago.

The Philippines were disappointed with the summit.


“The developing countries, including us, were not happy with the outcomes of the conference,” Acting Socioeconomic Planning Secretary Arsenio M. Balisacan wrote. See http://www.bworldonline.com/content.php?section=Economy&title=Rio+20-summit-found-disappointing&id=54419


Reaffirming the Rio 1992 commitments is perhaps the most radical principle in the entire declaration.
As a result, the draft document, which seems set to become the final document, takes us precisely nowhere: 190 governments have spent 20 years bracing themselves to "acknowledge", "recognise" and express "deep concern" about the world's environmental crises, but not to do anything about them. The declaration is remarkable for its absence of figures, dates and targets. There is no programme, no sense of urgency or call for concrete action beyond the inadequate measures already agreed in the declarations. Its tone and contents would be better suited to a retirement homily than a response to a complex of escalating global crises."

And while leaders do nothing at Rio, there is an alarming number of environmental activists being killed defending land and forests. In the last decade more than 700 land and forest defenders have been killed, rising to as many as 106 in 2011 - thats more than 2 per week.
http://www.globalwitness.org/library/survey-finds-sharp-rise-killings-over-land-and-forests-rio-talks-open

Our leaders have failed to protect our earth and our future and instead immerse themselves in the glamour of lavish events like Rio+20 while effectively doing nothing of importance.

Monbiot concludes "It suggests that the 190 governments due to approve this draft have, in effect, given up on multilateralism, given up on the world and given up on us." 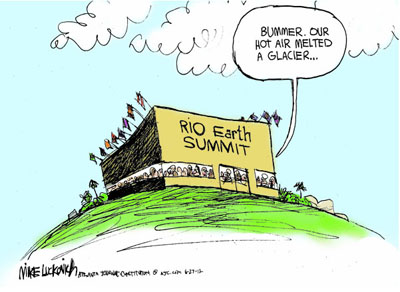 WHERE TO FROM HERE?

So what do we do now? Here in Tweed Shire, NSW we have a council that talks constantly of the need for economic growth while ignoring sustainability and protection of biodiversity and natural habitat. In N.S.W. we have an Environment Minister who says that logging is good for koalas and a state government that is hell-bent on supporting developers while ignoring rampant extinctions and potential loss of World Heritage values and has just approved a bill to allow amateur shooters in National Parks.

Isn’t it time leaders stopped letting activists defend the planet on their own...then again maybe it is up to us? After all, we outnumber them!

In Iceland they have recently arrested corrupt governments and Rothchilds bankers responsible for the economic crisis in 2008, fuelled by the Icelandic people’s demands.
iceland-dismantles-corrupt-govt-arrests-rothschild-bankers

It’s up to people to say ‘Enough is enough!'

Here is my solution: Planet Arktel

Sustaining the lies they teach
U is us, thats u n me
Staring past the fibs
Telling each and everyone
About our goals unreached
Instead its
Now Near ending time
Abhorrent tho it seems
Because the word sustainable
Is taking childhood dreams
Lashing childhood energy
In fear and lack of hope
The word sustaining really means
You're sucked in, ya silly dope