The globally unique and lovable Carnaby's Cockatoo exists only in the South West of WA. They are a totem for Noongar people and a part of our shared cultural and natural heritage. But the cockatoos are endangered and we are at risk of losing them forever.

Instead of helping the cockatoos to recover, the State Governments own analysis shows the Government's Green Growth Plan would further drastically reduce the population of these beautiful birds, intelligent, social and long-lived birds.. By locking in the clearing of thousands of hectares of bushland that the birds rely on, numbers of these already rare birds would be reduced by half and the long-term survival of the population would be placed in question.

While the State Government has hailed this Plan as a great environmental initiative, the grim reality is that it will result in the deaths of thousands of cockatoos through starvation as their vital food sources are bulldozed to make way for more unsustainable urban sprawl.

The South Eastern Red-tailed cockatoo is under increased threat from Victorian government fire "management" plans. A large part of its critical habitat will be burnt. (Editor: This article was originally submitted as a comment. The subject is so important we promoted it to an article and we recommend the Birdlife Australia site it gives a link to for the bird. The site is brilliantly written and illustrated, engrossing and informative on birds and 'fire-management' problems, although it is more diplomatic than this article, which pulls no punches. Readers of candobetter.net will know that there are a lot of people who aren't too impressed with state government fuel management programs. See similar pages on bushfires and on black cockatoos. These birds are wonders of nature, personalities in their own right, and incomparably beautiful. How could anyone allow them to perish?)

The numbers of endangered Carnaby's Black-Cockatoos has plunged across Darling Range jarrah forest roosts in the past year, according to new data released by BirdLife Australia. For other candobetter.net stories about the plight of the West Australian Black Cockatoo going back to 2008 see: Black Cockatoo.

Carnaby's black-cockatoos are found only in Western Australia and are one of only two species of white-tailed black-cockatoo found anywhere in the world. The other is Baudin's blackcockatoo. Both of these species are unique to southwest Australia. 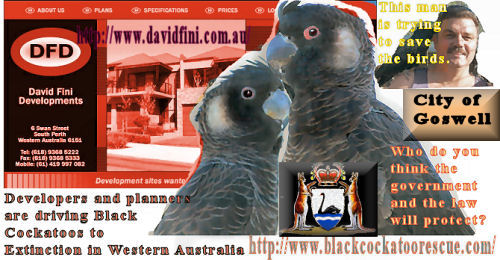 Glenn Dewhurst, of the Black Cockatoo Conservation Team in West Australia feels harassed and almost despairs in the face of complaints from a developer who lives next door to the 12 Acre Black Cockatoo Rehab facility in Martin, W.A., which Glenn has dedicated years of his life to constructing. 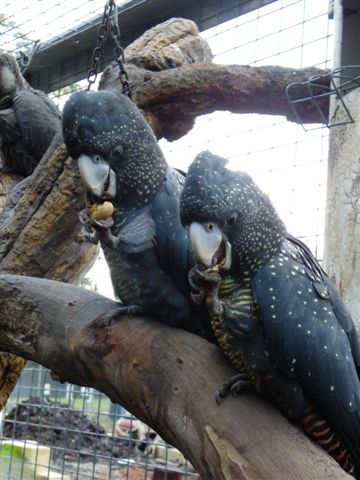 The developer, David Fini, of David Fini Developments, has complained about noise from nesting birds, Glenn says. Glenn cannot understand why since, he says, only two birds have been born in the rehab facility. "They were accidents. It is not meant to be a breeding facility; it is for rehab. We free the birds when they are well, we don't breed them."

Mr Dewhurst says that Mr Fini has also complained about workers there picking native nuts to feed the birds.