Increasing private-public partnerships, contracting out, privatisation, creation of authorities 'outside government' etc over the past 20 years in Victoria "has led to a steady erosion of accountability to Parliament and the public, as these services and the public monies that fund them fall outside existing accountability frameworks and the mandate of this office." (Auditor General, Victoria) The forward plan also notes concerns about population growth and food security. 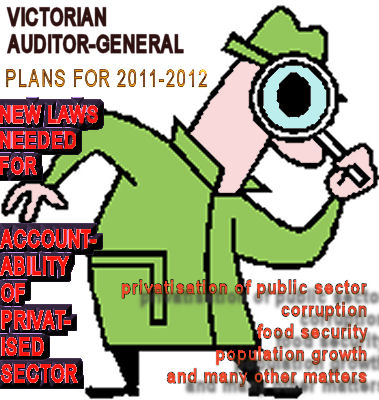 On Tuesday 24 May 2011 Victoria's Auditor-General, Des Pearson, tabled his Annual Plan for 2011-12 today in the Victorian Parliament.

The Annual Plan contains details of areas of audit interest for 2011-12, and a forward program of proposed audits for 2012-13 to 2014-15. Among these, are plans for ammendments to the Audit Act 1994[1]. Below we cite from that document, although some of the headings are from the editors of candobetter.net.

Amendments to the Audit Act 1994 are needed

Over the past 20 years, Victoria has seen an increase in the ‘arms-length’ delivery of public services through the private and community sectors. There has been increased private sector involvement in the delivery of public services through arrangements such as outsourcing and public private partnerships. There has also been a trend to create new legal entities ‘outside government’, such as companies, associations and statutory bodies, allowing these entities to access broader revenue sources and more flexible governance regimes.

Responding to these changes in the way government delivers services, the Public Accounts and Estimates Committee (PAEC) held an inquiry last year into the Act.[2]

VAGO made several representations to the inquiry, including a formal submission.

The all-party report of this Parliamentary Inquiry made wide-ranging recommendations, seeking to prevent the erosion of public sector accountability, strengthen the independence of VAGO and update the Act to reflect contemporary trends.

As indicated in our Annual Plan 2010–11, the Act is in urgent need of reform.

Given the importance of the need to repair the audit mandate, a number of technical and legal issues will need to be discussed further with government as it considers how any amendments should proceed. VAGO looks forward to a strong role in the further development of amendments to the Act.

Our scanning during development of the 2011–12 Annual Plan reconfirmed climate change and the environment; the ageing of our population; risks to sustainable development from diminishing oil supplies; population growth; and the continuing need
for transparency and accountability, as major challenges for government in coming years. In addition, the Council of Australian Governments Reform Agenda continues to affect the scheduling and focus of our program of performance audits, particularly in the health sector. [3]

[Candobetter.net Editor:] From reading this report, notably the attachments from page 58, it seems that in 2009 the Auditor-General looked into Victoria's food security and concluded that there were no significant risks. Since then, however, the Public Accounts and Estimates Committee (PAEC) has suggested that the matter be revisited, i.e. that food security may now be an issue.

"The Committee supports the Auditor-General's commitment to environmental scanning of issues and understands this underpins the Office's multi-year audit program. The Committee considers therefore, it would be beneficial if the Auditor-General's Office updated its research with relevant information on food security from 2010 and 2011 prior to scopint this audit to consider more recent research on issues surrounding food security." (PAEC)

The Victorian Auditor General responds on page 60 by noting the PAEC's comments and undertakes to consider food security in the audit research and scoping. Here the Auditor General also agrees, "As advised in the conduct of its annual planning function, VAGO will continue to, consider issues such as population growth and its impact on current and future service delivery and public sector activity."

Source of material in this article: http://www.audit.vic.gov.au/reports_and_publications/annual_plan.aspx

[2] "The former government sought to consolidate accountability arrangements for public bodies under one Act. The Public Finance and Accountability Bill 2009 was introduced into Parliament in December 2009, however, the Bill lapsed without being passed through the Upper House when Parliament was prorogued in October 2010. Any further progress on these reforms will be dependent upon the new government’s priorities." http://www.audit.vic.gov.au/reports_and_publications/annual_plan.aspx ,p1.