This song is sung in Bengali, which is a language from Bangladesh. It was a theme song for World Population Day 2013. I liked the tune and found the singers appealing. I wondered what the words were and obtained a translation through a friend in India. See inside.

"We are in adolesence and early marriage leads to death during pregnancy and child birth.
Now is the time to lead a happy and care free life
My life belongs only to me and I have to take care of my education and also protect my dreams and fulfill them.
People may say many things but I don't mind.. I have my independent goals...
I have to fly like a free bird in the sky" 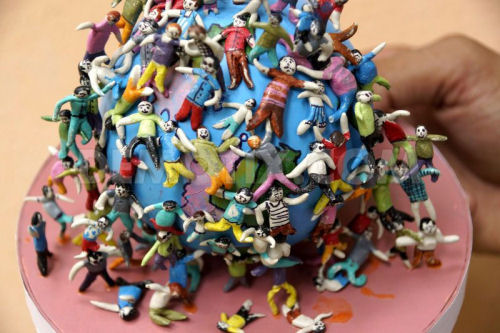 In Australia, people often get confused between sometimes competing issues like refugees and asylum seekers, racism, border protection, defence, economic migration, colonial guilt, and sustainability. These tensions are not unique to Australia, as we can see from debates in Europe and the US in recent times.

What the European, American and indeed Australian problems show is that sovereign states should not consider themselves immune from population pressures in other parts of the world as desperate people will have little regard for borders or dangerous sea crossings.

To that extent, not-for-profits like Sustainable Population Australia (SPA) are continually lobbying governments to increase foreign aid to the developing world to help it gain control over unwanted and harmful population increase. Unwanted population growth can largely be curtailed through a mixture of education, the provision of modern contraception, safe emergency abortion, and the alleviation of poverty – although some people like to argue about which is more important.
Regardless, the empowerment of women is vital.

So purely from a selfish point of view it is in Australia’s interests to maintain a reasonable level of foreign aid, in concert with the rest of the developed world, and targeted to voluntary family planning programs that we know can be successful. Unfortunately Australia’s foreign-aid budget has been shrinking lately in a retrograde and myopic fashion.

A recent survey commissioned by SPA found that most Australians did not think we needed more people; and a survey by SBS in May found that 59% of people thought that the level of immigration over the last 10 years had been too high*.

Proponents of a ‘big Australia’ are mostly business barons and their hirelings: the wealthy gain the most from population growth and can largely insulate themselves from its negative effects like sky-rocketing real-estate prices, long commutes to work and infrastructure shortfalls.

Meanwhile, the average person, but especially the young and the poor, suffers the most – from unaffordable housing, general congestion, and competition for access to education and health services.

More unseen problems tend to harm everybody: these include biodiversity loss, increased greenhouse gases and climate change, the reduction in fresh-water availability, and the steady increase in all kinds of pollution.

While unpopular among elites, especially economists, there needs to be a conversation about the direction our society is going. The privileging and mindless pursuit of GDP growth might not be the best option on a finite planet where limits to growth seem obvious to all those not blinded by dogma. Rather, the pursuit and monitoring of such things as general wellbeing and happiness might be a more rational strategy, especially if that means a more equal sharing of what wealth can be generated in an ecologically sustainable fashion.

If we adopt the latter planned approach, we might well find that a stable rather than an ever-growing population is more sensible. The alternative may well be an unplanned population correction that no one would find enjoyable.