With NSW’s (read Sydney’s) population growing at a break-neck pace (see below chart), last month it was revealed that there was a revolt underway from within the NSW Liberal Party against the federal government’s mass immigration program and over-development across Sydney (watch video).

With NSW’s (read Sydney’s) population growing at a break-neck pace (see below chart), last month it was revealed that there was a revolt underway from within the NSW Liberal Party against the federal government’s mass immigration program and over-development across Sydney (watch video above).

The most important quote from the video was the following:

“Government MPs have all told me the same thing: Sydney is full. They believe the federal government needs to have a difficult conversation about curbing immigration or it simply will not be possible to keep up”.

Now the revolt has spread to Sydney’s long suffering residents, with more than two-thirds of those surveyed declaring “Sydney is full” and off limits to further mass development. From The SMH:

With plans for hundreds of thousands of apartments in the city’s “priority precincts” over the next 20 years, the ReachTel poll conducted for Fairfax Media shows 66.4 per cent of NSW residents oppose more development in existing areas to accommodate a bigger population…

Significantly for the Coalition government, 61.7 per cent of Liberal supporters believe Sydney is full… Of Labor voters, 68 per cent are opposed to more development in existing areas…

The results will fuel tensions over the Greater Sydney Commission’s plans, spilling into the upper echelons of the NSW government…

The Greater Sydney Commission, established last year to lead on planning and development issues and chaired by former Sydney lord mayor Lucy Turnbull, says the city will need about 725,000 extra homes over the next 20 years to accommodate a growing and ageing population.

Sydney’s population is expected to grow by about 1.74 million people by 2036…

On Sunday, a spokesman for [Planning Minister Anthony] Roberts said… the population was increasing because people were living longer, more children were being born and more people were moving to NSW due to it having an economy that was “the best in Australia”.

The last paragraph is the funniest. It pins Sydney’s break-neck population growth on everything but the actual driver: the federal government’s mass immigration ‘Big Australia’ program, which massively ramped-up Australia’s immigration intake from the early-2000s to around 200,000 people annually:

Sydneysiders are not stupid. They know that extreme immigration-fueled population growth is destroying their living standards, with roads, public transport, schools and hospitals all crush-loaded and housing becoming hideously expensive.

The NSW Liberal ministers are right to revolt, as is the electorate. But they need to take the fight to the federal government, which is driving the mass immigration ‘Big Australia’ agenda, and demand that it immediately halve Australia’s immigration intake back to sustainable historical levels.

Article by Leith van Onselen. Dick Smith is a national treasure. Yesterday he used his own money to fund an ad in Australia’s major newspapers challenging Lucy Turnbull – the chief commissioner of the Greater Sydney Commission (GSC) – on mass immigration, and asking her what her eventual plans are for the population of Sydney – querying whether it could be 16 or even 100 million.

Below is the ad:

The response from Lucy Turnbull’s office was pathetic. From The Australian:

The Australian sought comment from Ms Turnbull, through the Greater Sydney Commission. Commission chief executive Sarah Hill responded that Sydney’s rate of population growth was the “hallmark of all successful cities around the world”, and the group based its planning on a middle range of growth forecast, prepared by the state’s demographers.

“More than half of this growth is through natural increase,” Ms Hill said. “Our responsibility is to plan for this to make our city more liveable, sustainable and productive, rather than to debate the facts.”

So, “more than half of this growth is from natural increase”, according to the GSC? Not according to the Australian Bureau of Statistics (ABS). As shown in the below charts, net overseas migration (NOM) into NSW (read Sydney) accounted for 67% of population growth in financial year 2016, and has done so on average over the past 30-plus years:

However, the above charts significantly understate the true impacts of immigration on Sydney’s population growth because “natural increase” captures the children of migrants. That is, NOM brings with it an immediate direct boost to population as well as a subsequent boost as new migrant arrivals have children (subsequently classified as “natural increase”).

For this reason, the Productivity Commission this year estimated that Australia’s population would peak at 27 million by 2060 under zero NOM, versus 41 million under NOM of 200,000 – a difference in population of 14 million! This comes despite only 9 million of this population increase coming directly from NOM. The other 5 million comes from migrants and the decedents of migrants having children (see next chart).

These are “the facts”, which the GSC seems only too willing to ignore: it is primarily mass immigration that is causing Sydney’s infrastructure woes, as well as pressuring housing.

Clearly, the best way for Lucy Turnbull to make Sydney “more livable” is to tap her husband on the shoulder and convince him to rein-in Australia’s mass immigration program.

Because as far as high immigration goes, the buck stops with the federal government. If you are in local or state government then you don’t have much choice but to cope with continuing mass immigration putting an ever-increasing strain on already stretched infrastructure, housing and public services.

Lucy Turnbull is in a unique position to influence federal policy and effect change for the betterment of both Sydney and Australia. But like her husband she is a mouthpiece for the ‘growth lobby’ that gains from never-ending population expansion at the expense of the rest of us.

This article, by Leith van Onselen, was first published at http://www.macrobusiness.com.au/2016/12/the-turnbulls-population-credibility-collapses-under-dick-smith-barrage/. Republished with author's permission.

A new front has opened in the student-migration scam, whereby the Turnbull Government has opened the door to international primary school students and their guardians to access Australian schools and purchase Australian property ahead of achieving permanent residency. From SBS News: 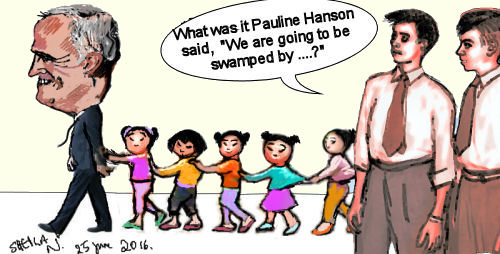 From July 1, students aged six and above would be able to apply for student visas regardless of their country of citizenship – and their guardians can also apply for Guardian visas (subclass 580)…

These visa-rule changes, which were announced during Prime Minister Malcolm Turnbull’s visit to China in April, also mean non-residents can buy several new properties or one existing property…

Dave Platter, from the leading Chinese international-property portal Juwai.com said there has been a nearly 20 per cent jump in inquiries for properties in Australia since Mr Turnbull’s announcement…

Most of their clients are either Chinese or South Korean investors, and Mr Wong says when they were choosing a property, there is no doubt their children’s education is considered most important.

He said buyers are planning purchases that cater for their children’s entire education.

“Schooling … that is – I can’t emphasise it enough – is one of the main factors,” he said.

“Our clients, I would say over 70 per cent, (are looking,) at schooling and the university afterwards.”

Unbelievable. Primary schools in “good” catchment areas are already bursting at the seams. Meanwhile, Australia’s biggest cities, which is where most migrants arrive, are already struggling to digest a decade of rampant population growth (immigration), which has clogged their roads, trains, and reduced residents’ overall amenity.

And yet the government wants to add more immigrant fuel to the fire, just so that it keeps a floor under Australia’s already ridiculously expensive house values.

Where is the additional federal investment in schools and infrastructure to keep up with the migrant influx? And where is the consideration of impacts on Australia’s existing residents – especially young families struggling to buy a home and put their children through schooling?

Is this what Australia has been reduced to: flogging land, houses and visas to wealthy Chinese? Is this what Turnbull really means by his “innovation agenda”? Surely we can do better.