US President Joe Biden ordered military airstrikes against facilities belonging to anti-terror resistance groups on the Iraqi-Syrian border. The military action, the first of its kind under US President Joe Biden, has been met with negative reactions, with many observers likening Biden's approach to that of his predecessor, Donald Trump.

The military action was said to be in retaliation for recent attacks against American bases and missions in Iraq, which Washington has blamed on so-called "Iran-backed" Iraqi resistance groups. Australian mass-media has uncritically repeated these pretexts. Iran has, however, repeatedly rejected any role in the attacks targeting American bases in Iraq. Iraqi resistance forces have been fighting remnants of the Takfiri Daesh terror group across border regions of Iraq and Syria in coordination with the governments in both Arab countries. Damascus has censured the US air raid describing it as "cowardly" and a "bad sign" from the new US administration.

In the introduction, Mohammed Ali, in Damascus, Syria, gives that state's response to the attacks.

It looks like youtube has removed this excellent analysis of the New Zealand terror attacks, probably because it criticises the unipolar political perspective of the corporate press and big tech platforms. There is an embed code for the video at Press TV Iran's site, but for some reason it does not work. We will therefore simply link to the press tv site. You can click on the video picture to see the debate. 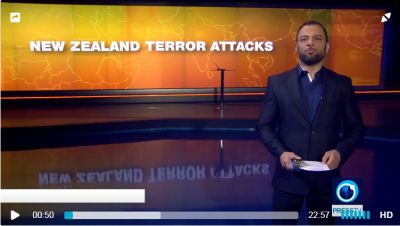 Video link updated now viewable. "The US dreams of a unipolar world and wants to drag Russia into an arms race." The most recent debate on the Iranian PressTV news service, New nuclear arms race (21/10/18), is embedded in this article. The 23 minute video of this debate about the US pulling out of the Intermediate-Range Nuclear Forces (INF) Treaty features ex-CIA officer John Kiriakou arguing against the United States' decision and Frederik Peterson attempting to defend that decision.

PressTV presenter discusses with his two guests how Syria has, after more than 7 years, triumphed over tens of thousands of terrorist invasders, who were armed and paid for by the United Sytated, IIsrael, Saudi Arabia and their allies.

Brilliant Iranian interviewer Kaveh Taghvai's questions on the subject are inspired in this debate - more of a discussion - between J. Michael Springmann, a former US diplomat, and Michael Lane, the founder of American Institute for Foreign Policy, both from Washington. The two guests and the interviewer all have an unusually deep grasp of the drivers of turmoil in the region and of the foreign players involved. We get some very interesting new perspectives and interpretations of the latest moves around Syria. For instance, Turkey's position is often hard to fathom. We know it wants to take land from the north of Syria, whilst pretending to be maintaining safe zones. We know it wants to drive the Kurds back, but the usefulness of the refugee camps for Turkey as a military buffer may not have occurred to everyone. And, why did the United States bother to try to get votes on a draft UNSC resolution to sanction Syria for alleged poison gas incidents, when it would know that Russia would veto these highly dubious allegations? And China! We hear some new ideas on the motive, in terms of bargaining chips. In this episode of The Debate, Press TV has brought out layered and thoughtful explanations and comment on the foreign-backed war on Syria, particularly a Western-proposed UNSC draft resolution against the Syrian government that was vetoed by Russia and China.

American boots on the ground. We hear this all too often throughout the world and now the war ravaged country of Yemen is the latest victim of US military troops. But why Yemen and why now and what are these troops trying to accomplish in a country that is facing a brutal war against it by Saudi Arabia, a war that Washington has given the green light to.

Above 23:30 minute video is from the PressTV YouTube Channel.

"The last people who should be returning to the scene of their former crimes are Britain, France and the United States of America." Those words were said by George Galloway, a British MP during a debate in the lead up to a vote on the UK participating in airstrikes in Iraq against ISIL. It came as no surprise that the vote went through, though concerns remain about how the very countries involved in the 2003 Iraq War and subsequent chaos which helped in forming ISIL, can beat their own Frankenstein. In this edition of the debate we ask: was the mission a never-ending creation of pretexts, however false, in order to justify an unending war in Iraq?