"Only the Liberal Party will protect the amenity and character of our neighbourhoods and rural hinterland," says Russell Joseph, Liberal Candidate for Nepean. We don't often publish statements from the major parties, but this is the first one we know of that looks at protecting the Mornington Peninsula. The Peninsula is an incredibly biodiverse part of South-Eastern Australia, hardly explored to date in terms of paleontology, rapidly losing its native fauna and flora. The undeniable fact that governments since Jeff Kennett have promoted destructive population growth here makes any policy to protect it extremely important. We will publish statements from any other political party that has a plan to protect the Mornington Peninsula from overpopulation. 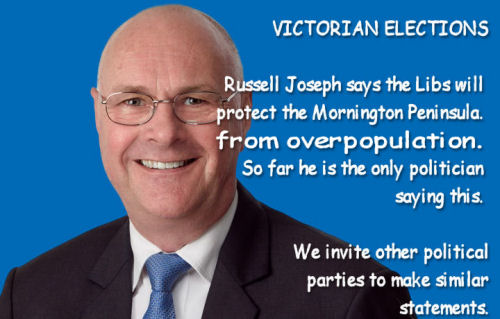 "In 2014 the Liberal government introduced the Mornington Peninsula Localised Planning Statement to help protect our unique coastal, rural and conservation areas of the Mornington Peninsula townships and hinterland. However under Labor our General Residential Zone has been ruined and will now become a location for 3-storey apartment-style developments regardless of the established character of our neighbourhoods," he states.

The Federal Parliament of Australia, a country which, in the 1960's participated in the devastating war against Vietnam and in the illegal wars against Iraq in 1991 and 2003 and which is now participating in the ongoing war against Afghanistan, yesterday passed legislation to undermine international laws to eradicate cluster bombs. The Governing Labor Party and the Opposition Liberal/National Coalition united to support the bill. This was a betrayal of Australian international obligations, Australian Greens spokesperson Assisting on Defence Senator Scott Ludlam said yesterday after the Government's cluster munitions bill passed the Senate.

Opposition Treasurer Joe Hockey, on Lateline, warned the public that the Coalition would be looking closely at ''the whole range of entitlements'' - that is, welfare benefits. Hockey said, ''We need to compare ourselves with our Asian neighbours where entitlements programs of the state are far less than they are in Australia.''
Is the "Asian Century" is about downgrading our lifestyles to those of the third-world standards of their teaming and overpopulated cities? 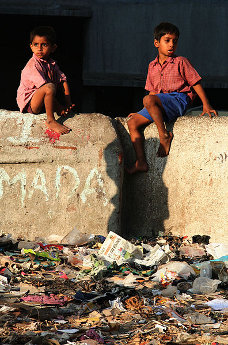 Image: two boys on a concrete wall, overlooking rubbish in Dharavi.
Original description: Inside Dharavi, Asia's largest slum of over one million dwellers. From producing clay pots to recycling plastic, this slum is also home to hundreds of businesses and defying the many myths of poverty.The sum of these small enterprises have an annual turnover of $665 million!

Opposition Treasurer Joe Hockey, on Lateline, warned the public that the Coalition would be looking closely at ''the whole range of entitlements'' - that is, welfare benefits.

Despite Tony Abbot's efforts to manage what messages the opposition sent to the media, Hockey delivered a provocative speech in London and then mismanaged the interview afterwards.

Treasury Secretary Ken Henry recently predicted Australia’s long term projected population has increased from 28.5 million in 2047 to over 35 million by 2049.

Only thirty percent of those surveyed believed growth at this level was acceptable.

Australia’s rebuke of Mr Rudd’s ‘big Australia’ comes on the back of comments made earlier this year by former NSW Premier Bob Carr likening population growth of this enormity without an environmental impact assessment, to playing ‘Russian roulette with water security.’

While Mr Rudd and the Labor government might be excited about a ‘big Australia’, this poll shows Australians are seriously concerned of the demands this population explosion will place on our infrastructure, environment, economy, social systems and quality of life.

Mr Rudd has arrogantly failed to provide any coherent strategy or detailed plan to accommodate this projected population explosion in a sustainable way.

The Prime Minister’s ‘big Australia’ ambitions and lack of any credible policies to deal with the forecast ‘population explosion’ should set off alarm bells about the problems our cities and environment will face.

Shadow Minister for Planning Matthew Guy has issued a press release declaring that he will today ask the Parliament’s all-powerful Finance and Public Administration Committee to call the Planning Minister, Mr Madden, and the Growth Areas Authority (GAA) to appear before it to urgently explain the proposed Growth Areas Infrastructure Contribution (GAIC) that will have damaging effects on Victorian families."

Matthew Guy says he will ask why taxes not imposed on developers rather than land-owners.

In the press release it says that the Committee has the power to subpoena any Upper House minister or government agency, and that Mr Guy has said the Minister and the GAA should provide full and frank evidence explaining why this tax is being aimed at landholders on the outskirts of Melbourne, and not at those who sought to develop the land.

“The Minister’s public comments to date have been woefully inadequate and have left residents, councils and industry in the dark about this new tax,” committee member Mr Guy said today.

A report in Melbourne's "The Age" newspaper August 25th 2008 tells how Mr Ted Baillieu the rather affable, reasonable sounding leader of the Opposition in Victoria howled down members from his Sandringham branch of his party who voiced a concern about Melbourne's massive population growth - about 1,500 people per week The Age quotes Mr. Baillieu as saying to a meeting of 700 . "Be very careful when you discuss these things. Don't allow anyone to say we are opposed to population growth, or that we are going to point fingers at migration. If we put out the stop sign then we are sending the wrong messages, and this economy will suffer long-term." He went on to say that Melbourne's problems with train services and the lack of water resources was due to lack of planning by the current state government. of greater Melbourne." (Melbourne's dams are are at a lower level than were this time last year despite recent rain and of course we have about 60,000 more people!)

The following speech has been copied from the NSW Legislative Council Hansard of 27 August 2007.