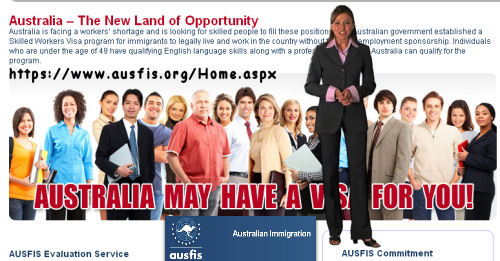 Ausfis's talk about 'a new land of opportunity' belies the biogeophysical reality of Australia - the oldest, driest continent.

This is a link that was sent to an immigrant from Peru from someone living in Peru - about inviting migrants to come to Australia because we have opportunities and skills shortages!

It not only refers to skill shortages, but it suggests that its lawyers will get applicants citizenship after four years and encourages immigrants to bring their dependent family members to live here as well, receive health care and use the public education system.

"What are the benefits of receiving a visa via the General Skilled Worker Visa program?

The grass is greener in Australia. If you are planning to make a move outside your home country, Australia should be on the top of your list as a place to make your dreams a reality. Besides legally living and working in Australia, a Australian General Skilled Visa has other benefits,
such as:

Bringing all dependent family members with you
Receiving healthcare
Using the public education system
Applying for citizenship after 4 years!"

Note that FECCA has only recently published a paper "Immigration speeds up Australia's rate of aging - FECCA"calling for special funding for aged immigrants because of the way immigration ages the Australian population. Every immigrant comes here older than anyone born here, but this fact is grossly magnified by the effect of bringing dependent adults as extended family here. Between 2011 to 2026 ethnic people over 80 will increase by 59% compared with 29% in the Australian-born population. Continuing high immigration threatens to make this problem unmanagable, with stress on housing, employment, water, food and power supplies undermining democracy, health and life-expectancy.

Ausfis looks very official and could easily be mistaken for an Australian Government website and message, but it isn't. It is a private business composed of people who make money out of processing migration applications. In fact, it does clearly state what it is at the bottom of the page and the agency promotion style seems responsible. It is not doing or saying anything illegal or misleading; it is, indeed, apparently promoting government policy.

Currently immigration to Australia outweighs births over deaths. It is the main source of population growth here. 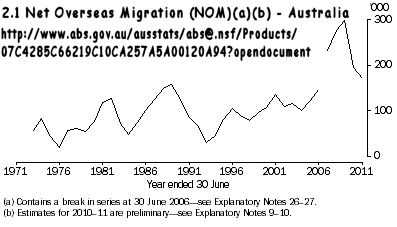 Source: http://www.abs.gov.au/ausstats/[email protected]/Lookup/2071.0main+features952012-2013
Despite the economic impacts of the global financial crisis which started in 2007 and the ongoing repercussions within global financial markets, Australia experienced strong and sustained population growth throughout the period 2007–2011 (see the graph of Annual population growth above). In 2009, the addition of 394,000 people was the highest single annual increase to Australia's population, and the annual growth rate of 1.8% was unmatched since 1972. Migration was a significant factor in the population growth during this period. For the first time since federation, migration consistently contributed more to population growth than the contribution from natural increase. However, much of this recent increase has come from increased numbers of long-term temporary migrants; those with student, holiday and business visas (for more information see Migration, Australia (cat. no. 3412.0). The effect of this high level of migration can be seen in the 25–29 years age group in 2011, where there were an additional 385,000 people compared with the numbers in this cohort when they were aged 5–9 years in 1991. "