Campbell Newman is permitting bauxite mining within the original buffer zone of the wild river reserve John Howard gave taxpayer support to after Steve Irwin's death in 2006. Bauxite mining is especially hazardous to tropical wetlands. Australia's Steve Irwin was loved by the world and arguably the most successful wildlife defender of the late 20th and early 21st century, eras not known for their sympathy with nature or democracy. This seems like an environmental and unpatriotic obscenity.

We all know how difficult it is to chisel any protection for nature out of governments, so the Wild Rivers Act 2005 almost certainly underestimated the buffers necessary to protect Australia's wild rivers. Now Queensland's new Premier, Campbell Newman, a man many will already associate with grandiose failed concrete projects that depend on public money and bauxite, is going along with mining's song of how they can open-cut mine pollutant, water and energy intensive projects ever closer to these fragile river systems.

In "Wenlock Wild River declaration to be lifted," Courier Mail (Queensland) 23 April 2012, Brian Williams, writes that Cape Alumina Mining is set to mine bauxite in the Steve Irwin Wildlife Reserve in Cape York. This rape of the wilderness is now possible due to the new Queensland Premier, Campbell Newman, weakening recent conservation laws that protected the reserve under the Wild Rivers Act.

The Wild Rivers Act 2005 says, "Mining leases—tenement conditions for granted or renewed leases: Only low-impact exploration activities and specified works, such as roads and pipelines are permitted on the surface of a high preservation area or a special floodplain."..."Prospecting permits—tenement conditions for granted or renewed permits
A permit cannot be granted over land in an HPA, SFMA or a nominated waterway." (Source: http://www.derm.qld.gov.au/factsheets/pdf/water/wr18.pdf Bauxite mining is high impact and particularly problematic for tropical wetlands because it affects hydrology, changes water acidity and soil structure. This damages river health and aquatic creatures and carries through to land-animals and birds. The operation requires substantial clearing for open cut mining and the roads leading in and out of the mining area, as well as infrastructure for accommodation, offices, storage and processing. Fluoride is used in the processing of bauxite to get aluminium. The industry is energy and water intensive.[1]

Newman was formerly Mayor of Brisbane and known for his gung-ho participation in inflicting massive money-losing private-public partnered tunnels on Brisbane despite sustained public protest. Not then a liberal party member, he was imported to lead the Queensland Liberal Party just prior to the recent state elections. This bizarre decision replaced long-term liberal member, Dr John-Paul Langebroek as leader. Dr Langebroek had questioned privatisation and corruption in the former Labor government. Campbell Newman is pro-privatisation.

In a rare environmental gestures, former Liberal Prime Minister, John Howard, had allocated public money to help fund the purchase of the Steve Irwin Wildlife Reserve after Irwin was stung to death by a stingray in 2006. The Wild Rivers legislation was an exceptional creation of a former Labor Government, not known overall for its respect for nature. Bauxite provides feedstock for aluminium production and is used in the cement industry and in the manufacture of building materials and many other mass-produced items, including soda cans, cosmetics, artificial gemstones and aluminium products like saucepans and cars. Expansion of bauxite mining is a symptom of overdevelopment associated with overpopulation and a throw-away commodity based economy that depends on huge energy expenditure and costs us all quality of life and environmental amenity. Currently in Australia these ills are exacerbated by a boom and bust mentality that is encouraging rapid strip-mining of anything that can be dug up and exported. This culture is impoverishing our country. 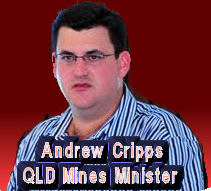 Queensland Natural Resources and Mines Minister Andrew Cripps reportedly said that mining companies would still face strict regulations after Wild Rivers Act was changed, but that "...politics won't be getting in the road." Source: http://www.abc.net.au/news/2012-04-24/qld-government-moves-to-review-wild-rivers-laws/3969460

One wonders at the 'politics' that see the reversal of environmental protection in tropical forested North Australia, at the behest of the mining industry and Campbell Newman's election promises.

All in all this is terrible news for biodiversity, nature and democracy in Queensland. It is also incredibly sad in its disrespect for Steve Irwin's memory and contribution to our land.

What is a wild river declaration?

(Source of this information is http://www.derm.qld.gov.au/wildrivers/declared_areas.html)

A wild river declaration is a statutory document under the Wild Rivers Act, which aims to preserve  a river that has all, or almost all, of its natural values intact. This is done by regulating, through the declaration, certain new development activities that have the potential to impact on the river’s natural values. A declaration sets out:

A wild river declaration outlines where new development can occur in the wild rivers area and under what conditions. Wild river requirements do not apply to everyday activities such as feeding stock, refuelling machinery or fishing and camping along the rivers, or to developments existing at the time of declaration.

Bauxite Mining can have significant particulate/dust emissions due to the extraction process that involves explosives and the transporting of raw materials to the smelter.

Bauxite refining (Bayer Process) requires significant amounts of water and energy to separate the alumina from bauxite. producing gaseous emissions that include particulates, SO2 and NOx.

Aluminium refining (Hall Heroult Process) uses sodium aluminium fluoride(cryolite) and an electric current to electrolyse alumina to aluminium. The process is energy intensive. Emissions include fluorides and particulates. SO2, NOx and CO are also generated by the power stations used to supply the refinery with electricity.

Global warming is of special interest to the aluminium industry as approximately 14 MWhr/tonne is required for the aluminium refining process resulting in associated high levels of CO2 greenhouse emissions." Source: http://www.ecotech.com/applications/aluminium-industry