Posted on behalf of the National Dingo Preservation and Recovery Program Inc. A recent academic publication explores the prospects of reintroducing the threatened Tasmanian Devil into forested south eastern Australia as a way of restoring ecosystems. Two important environmental objectives are considered in putting this forward: increasing the survival prospects of the devil itself which is currently threatened in Tasmania, and restoring ecosystems through the re-introduction of a top-order predator role in areas where the dingo (which currently performs this role) has been ‘extirpated’. This paper is important for dingo conservation advocates and organizations. This is because dingo conservationists have come to rely increasingly upon reference to the apex predator role of dingoes in making their case to governments. Further, what initially may seem an innocuous initiative for the re-introduction of devils to mainland Australia, on closer inspection is troublesome both politically and environmentally. First, an outline of the research and what it concludes.

National Dingo Day plans for a FULL BLOWN PROTEST MARCH IN MELBOURNE VICTORIA ON THE 14th FEBRUARY 2014 at 11.55 am Spring Street, full see Facebook for details

Sad story of 3 brothers, 2 killed, one is running for his life

A dingo From the K'Gari Butchulla camp called "Inky "is running for his life. QPWS targets three dingo brothers for ‘crimes’ they ‘supposedly’ committed and they have been coded for destruction. Visit Youtube news story on this dingo for a news report:- http://www.youtube.com/watch?v=ypA2oeiO8Rs&list=UUdyUpJ3MnEdPLQnOuxMfAsg&index=6&feature=plcp 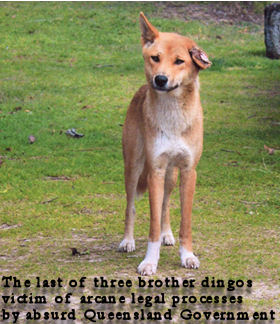 Dingoes on Fraser Island, Australia are dying of starvation, with sand and grass in their stomachs. One woman tried to alert the world to this and was sentenced and fined for her trouble. On 25th of August 2012 Jennifer Parkhusrt received a national award from the Australian Wildlife Protection Council in recognition of outstanding contributions to the preservation and protection of Australian native Wildlife. What a contrast to the treatment she received from the Queensland government!

(Jennifer Parkhurst's website. More information about donations at end of this article.) 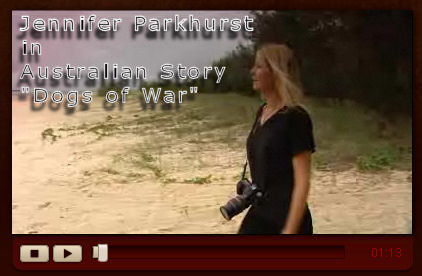 Letter from Australian Wildlife Protection Council to RSPCA: "We seek your help to insist that appropriate action be taken against the perpetrators of cruelty committed vs a Fraser Island Dingo. Freedom of Information reveals Dingo Necropsy Report of a cruel horrific death on a healthy male dingo. This cruelty has been dismissed. The tragedy was entirely preventable and is this not what the RSPCA is all about? Prevention of Cruelty to Animals?" Thanks to the Habitat Advocate for the photograph. 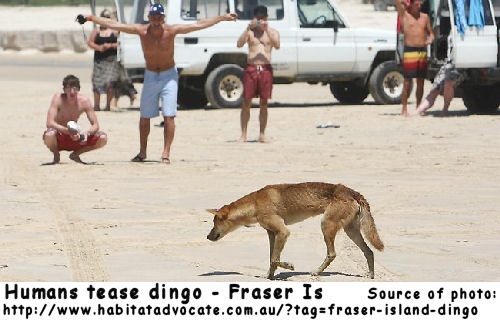