National Dingo Day plans for a FULL BLOWN PROTEST MARCH IN MELBOURNE VICTORIA ON THE 14th FEBRUARY 2014 at 11.55 am Spring Street, full see Facebook for details 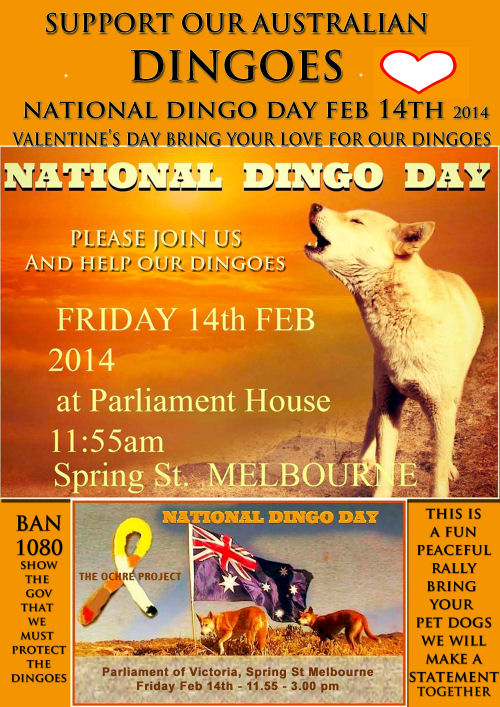 1080 being used randomly in Australia has created an environmental disaster and is pushing our native dingoes to the brink..... 5000 PLUS TO MARCH TO VOICE A PROTEST AT THE PERSECUTION OF THE DINGO IN AUSTRALIA.

THIS INSANITY MUST END AND THE DISGUSTING PRACTICE OF OUR FEDERAL GOVERNMENT OF 1080 POISONING MUST END !!! IT IS A BRUTAL AND TOTALLY INHUMANE DEATH.

Research into the importance of dingoes to Australian ecosystems has been awarded a Eureka prize. (Credit: Getty)

An Australian Geographic supported study into the importance of dingoes has won the Eureka Prize for Environmental Research.

An Australian Geographic sponsored study which revealed the dingo’s vital role in Australian ecosystems has been awarded this year’s Eureka Prize for Environmental Research. Through this research, a team of Australian professors demonstrated the environmental significance of the dingo, a species at the centre of much debate in Australia. The findings suggest that dingoes aid in the survival of vulnerable species such as bilbies and hopping mice, by suppressing populations of introduced predators and large herbivores.

Dingo's reputation on the rise

“Though sometimes miscast as vermin, our research shows that dingoes are key elements in the struggle to reduce damage caused by foxes, feral cats and even kangaroos," writes Euan on his blog.

"Ecosystems with dingoes have better vegetation and more diverse and abundant populations of small native mammals. In fact, a good dose of our native dog can sustain biodiversity and help land managers control invasive species.”

Something akin to the Academy Awards of science in Australia, the annual Eureka Prizes are presented by the Australian Museum in conjunction with the New South Wales Office of Environment and Heritage. The awards honour excellence in fields of research and innovation; leadership and commercialisation; science journalism and communication; and school science. Text by Wes Judd.

There's been confusion about the location of the Dingo Day rally. It is actually on the STEPS of PARLIAMENT HOUSE, Melbourne, not opposite!