For more information about gas-fracking, see "Fracking democracy - Gaslands- the movie, the industry and national responses." France completely banned all fracking a few months ago and last week it revoked licences given to some companies which tried to demonstrate a new, safer method. The French Government said that there is no safe method of fracking. It is environmentally destructive, socially destructive and dangerous to water catchments.

Contacts and details for Sunday 16 October protests in Brisbane.

Aussies take action! Lock the gate! Defend our water from coal and coal seam gas!
Coal Seam Gas and Coal represent the biggest threat to our precious underground water reserves in our history. On Sunday October 16, join with communities across the country to demand a moratorium until the full social and environmental impacts are known. Gather 11a.m. Queens Park, Cnr George & Elizabeth Sts., Brisbane City. 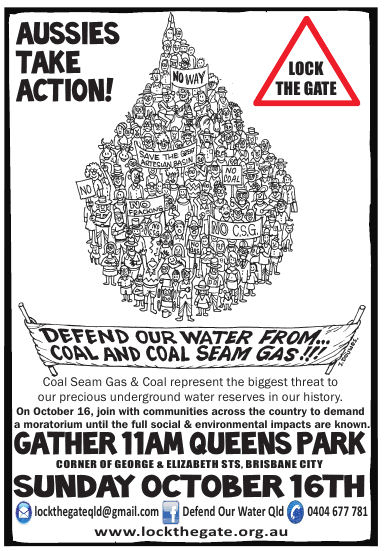