Originally published as "Community must ask who bears the cost of progress" by Dr Mark Copland of the in the Tooowoomba Chronicle of 5 Jan 10 (URL of article unkown). 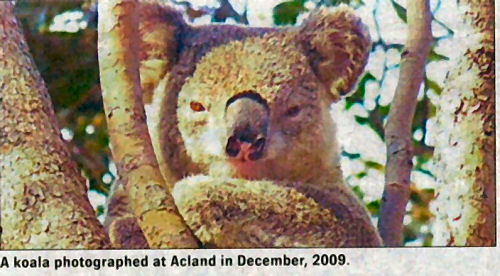 This story first appeared, along with the koala photograph, in the Toowoomba Chronicle on 5 January 2010.
Story written by Dr Mark Copland

Acland - a town on death row

Late last year I took a short drive and visited the town of Acland. It was a haunting visit. Like a town on death row -- or a community on life support -- except they've already started ripping the drips and sensors from the veins before the patient is even dead. The Acland story is like the Australian movie "The Castle" -- except this one doesn't have a happy ending. It left me full of uncomfortable questions -- with far too few answers.

As people we are good at opening things. We bring in the politicians, the brass bands, the plaques and all enjoy a very civilized morning tea as we bask in the warm glow of progress. One of the many questions sitting with me as I left Acland was, "How do you close a town?" How do you honour the memories, the lives lived, the countless hours of voluntary community building given by loving citizens? It's a bit embarrassing and so we mumble something about progress once again and then just move on. 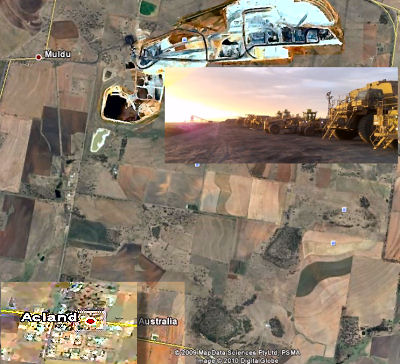 In this process, mining companies spend hundreds of thousands of dollars on expert consultants who create very large documents telling us why the mine must go ahead. There is barely even the illusion of independence. The average citizen with no resources is given a few weeks to respond. The question is not will the mine go ahead -- but how can the mine go ahead?

I met one of the last men standing in Acland. Glen Beutel. Glen isn't ready to move on. And I don't blame him. Us Aussies love the glorious defeat -- Gallipoli, Ned Kelly etc. And Glen is in this tradition. By staying - he is shining a light on the farce that passes as the Environmental Impact Statement process. In this process, mining companies spend hundreds of thousands of dollars on expert consultants who create very large documents telling us why the mine must go ahead. There is barely even the illusion of independence. The average citizen with no resources is given a few weeks to respond. The question is not will the mine go ahead -- but how can the mine go ahead? The key word for the proponent is mitigation - how to respond to government regulations and possible community complaints. And the company gets its money's worth. If you read one of these things you would almost believe that the local environment will be enhanced with an open cut coal mine, which if all goes to plan will eventually engulf the town that once was Acland.

I met somebody else on the road to Acland. The guy in the picture above. Last Summer our hearts went out to image of the koala burnt in the Victorian bushfires. In 1995 furry friends like this one helped to bring down the Goss government as proposed roads in South East Queensland were believed to be destroying koala habitat. And while there are even fresh water tortoises that call Acland home -- there won't be a Mary Valley Turtle to bring a halt to things a la Traveston Dam. I wonder if finding this bloke and his friends a new home is part of the planned expansion of the Acland mine. No doubt the plan will be buried somewhere in the Environmental Impact Statement.

Acland like Pandora in Avatar - Who pays for 'progress'?

A few nights ago I sat with my 3D glasses on watching the blockbuster movie Avatar. The plot is thin -- but familiar -- a colonizing power wishes to remove some Indigenous people to rip a precious mineral out of the ground. It's Hollywood where the good guys win and the baddie gets his just desserts. All the while I was watching it I had Glen Beutel and my Koala friend sitting somewhere on my shoulder. One of the serious questions that Avatar leaves the viewer with -- "Is it always necessary and right to take things out of the ground, and use them -- just because they are there?" I am sure when the Acland mine was first proposed there was never any mention of closing down a town. For me the sadness is not just the passing of the town -- but the way that it has been done. As a region we must ask the question, "What price progress -- and who will bear the cost?"

See also: Also from the Toowoomba Chronicle: "Our region could be one big hole" of 16 Nov 09 by Madeleine Logan, "Removal trucks spell last rites for Acland" of 10 Oct 09 by Madeleine Logan, "Coal mine nightmare" of 12 Nov 09 by Madeleine Logan, "Facebook keeps residents on line" of 9 Nov 09 by Madeleine Logan, "Friends take heart from senators' visit" of 30 Sep 09 by Roseanne Schefe, "Jones labels Acland's decline as 'sickening'" of 30 Jan 09 by Madeleine Logan about Sydney radio personality Alan Jones' feelings about the threatened destruction of his home town, "$200m mine deal sparks water war" of 16 Nov 07 by Sue Searle, "Acland producing the cleanest coal" of 22 Mar 07 by Greg Berghofer, "Couple join exodus as Acland 'closes down'" of 2 Mar 06 by Sarah Vogler; Web site of the New Hope coal company: www.newhopecoal.com.au (including environmental impact statements, newsletters and assorted other pro-coal-mining propaganda); Friends of Felton web sites: www.fof.org.au, www.friendsoffelton.blogspot.com.

What you can do