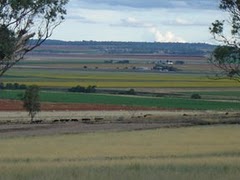 Friends of Felton spokesman Rob McCreath said, "This is a clearly an unviable project, which would have disastrous consequences for agriculture, the environment, and the community at large."

"Two years have passed since Ambre Energy first announced their plans for the Felton Valley. Local residents are virtual hostages, their lives and plans are in limbo." Mr McCreath said. "The efficiency of the district's cropping and horticultural industries is being reduced by the threat of the mine" he added.

Friends of Felton calls on the Queensland Government to intervene immediately to reject the Ambre Energy proposal, which is clearly not in the public interest.

See also: "Felton farmers left in the dark" in the Toowoomba Chronicle of 12 Jan 10, "Farmers 'held hostage by mining plans'" in the Sydney Morning Herald of 11 Jan 10, "Agriculture v Mining - Friends of the Felton Valley and the Haystack Plain" on Brisbane ABC radio's Evenings with Steve Austin of 4 Jun 09, including audio files of debate (10 Mb) between John Cotter, the President of Agforce and the Chief Executive of Queensland Resources, Michael Roche and interview (10Mb) with Rob McCreath of Friends of Felton, "Farmers occupy Qld Premier's office to save Darling Downs from coal mining" of 2 Nov 08, "Rural town threatened by open cut coal-mine: Acland, Queensland" of 10 Jan 10, Friends of Felton web site at www.fof.org.au and blog site at www.friendsoffelton.blogspot.com.

#main-fn1" id="main-fn1">1. #main-fn1-txt">↑ Di-methyl Ether (DME) can be used a substitute for diesel as a fuel for motor vehicles. After world oil production inevitably peaks and begins its inexorable decline, it seems likely that we will look to the large scale production of DME as one alternative to petroleum. How we balance the needs of our industrial society with the needs of the natural environment and our need to produce food in areas such as the Felton Valley will be a difficult, if not altogether impossible problem to solve. It is urgent that we pre-empt this by planning to end Australia's unending economic growth and, instead, achieve a steady state economy within the limits of our natural environment as soon as possible. 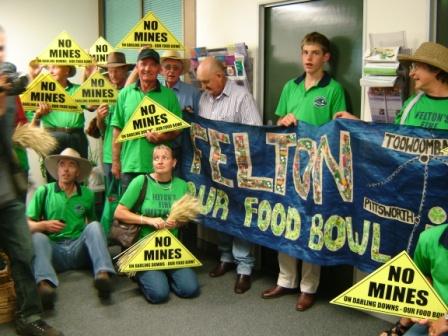 The Friends of Felton group today sat on the floor in the Premier's office to demand the Government introduce legislation to protect prime farmland from mining. The peaceful protest involved around 25 people#main-fn1">1.

Spokesman Rob McCreath said "The mining boom is out of control. Areas such as Felton, Jimbour, and Warra are the jewels in the crown of rural Queensland. The Premier must act now to protect our food bowl from destruction."

The group set up a mock lunch table on the pavement outside the office, with a plate of coal for the Premier's lunch, and a glass of polluted water.

The protesters shared their own picnic lunch with onlookers – a picnic made from fresh Darling Downs ingredients.

Postscript: The Courier Mail of the next day, Saturday 1 November 2008 completely failed to report protest in spite of this media release having been sent some time before 1:03PM. The business section included more stories about the claimed prosperity that coal mining will bring to the Darling Downs:

Appendix: The case against Coal Mining In Felton Valley

Stage 1: A three year demonstration project involving the mining of 750,000 t/yr of coal and its processing into Di-methyl ether (DME), an alternative fuel, and gas for a power station.

Stage 2: Massive expansion of the mine to 12.8 million tonnes/yr.#main-fn2">2 Expansion of power station and petrochemical plant.

The mine's anticipated output of 12.8 million tonnes/yr would be greater than any existing Queensland coal mine!!

This is TWICE the size of the new Acland mine, near Oakey.

Key arguments against the development

The Friends of Felton are committed to opposing a coal mine at Felton for the following reasons:

HOWEVER the mine will only go ahead if the government grants it an operating licence. If you agree with the position adopted by Friends of Felton please add your support by whatever means possible. The decision makers already know that not all mining proposals are acceptable. What they still need to be convinced about is the unacceptability of the one being proposed for Felton.

How can you help?

Become an active member of

#main-fn2" id="main-fn2">2. #main-fn2-txt">↑ Originally it was to have a capacity of 24 million tonnes/yr of 4 times the capacity of the new mine at Acland, but it was scaled back to 12.8 million tonnes/yr. They were to use water drained from acquifers to wash the coal, but they have since claimed that they can do without the use of water. Friends of Felton are skeptical that this will last.

See also: www.friendsoffelton.blogspot.com, YouTube broadcast of (Oct 2008(?)) "Coal Mines To Replace Farms in Australia", "Darling Downs community fights farmland for mine move" in Sunday Mail of 1 Nov 08 (Friday's protest not reported), "Coal vs cropping fight widens" in Stock and Land of 15 Oct 08, "Lone stand as coalminers poised to bulldoze Acland" in the Courier Mail of 18 Oct 08, "Darling Downs farmers vow to resist coal miners" in the Courier Mail of 5 Oct 08, "Qld farmers take on coal industry" in the Green Left Weekly of 25 Oct 08.

Friends of Felton welcome the announcement that the Bligh Government has scrapped the proposed $14b shale oil mining project in the Whitsundays.

We also welcome the declaration that other big developments will be stopped if they threaten Queensland’s pristine environment, and that legislation will be passed to prohibit new shale oil mines anywhere in Queensland.

We call on the Premier to confirm that this ban will include Ambre Energy’s proposed development at Felton, 30 km SW of Toowoomba, on the Darling Downs. This proposal includes a 12 million tonne/year open-cut coal mine, and a petrochemical plant to convert the coal into liquid fuel.

Ms Bligh was quoted as saying "Our environment must come first".

Will the Felton environment come first too?

The Premier recently announced a ban on new shale oil developments in Queensland for environmental reasons. In state parliament last week, the Minister for Mines & Energy stated that no new entitlements would be granted until a 2 year review had been carried out.

Friends of Felton were informed by the Premier's dept on 27th August that the Felton project proposed by Ambre Energy was not affected by the ban.

The Premier was quoted as saying "The environment must come first". By including Felton in the shale oil ban, she will demonstrate her concern for the natural environment as well as the political environment.