If we had direct democracy and referendums in this country, the Wonthaggi Desal would never have got up - but we don't, yet. Andrew Chapman is leading a fight for water justice for Victorians to find out how on earth the Brumby government got away with this one. The project is currently estimated to cost $5.7b and it is thought that Victorians will be paying $600m/year for it whether or not the water is required. It will also tax Victoria’s electricity supplies. See also: More on Wonthaggi Desal plant and history of Royal Commission movement 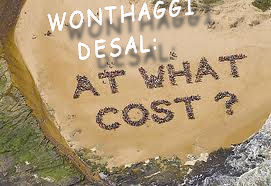 Midday: Anti Desal Plant Rally on steps of parliament, Melbourne. All supporters welcome. After that, go to the Upper House Gallery, Parliament House,and show your support to the Opposition's motion to Overturn Amendment VC71

Watershed (formerly Your Water, Your Say) – those protesting the now infamous Desal Plant at Wonthaggi, ARE HOLDING A RALLY ON THE STEPS OF PARLIAMENT HOUSE, calling for the very expensive and deeply troubled project to be scrapped. You are enthusiastically invited to support them by being there – after all, its OUR money and OUR future too, not just theirs.

Wednesday 6 October (time to be advised but likely afternoon)

Matthew Guy, Shadow Planning, will be moving a motion in the Upper House to get rid of the terrible Amendment VC71 that was approved by Planning Minister Justin Madden last week. VC71 is a terrible amendment and terrible planning which puts Melbourne 2030 across all of Victoria, forcing metro standards on country areas, and makes it obligatory to have high rise and high density across the metro area (these provisions could also be applied in country areas).

Please show your support for getting rid of this horrid amendment by being at Parliament House Upper House gallery if you can. If you haven’t been to parliament before, here’s your chance to see how our democracy works (or not).

This is a very informative wrap up of the problems - political, economic, production and environmental - of the desalination plant that the Victorian Government is forcing on Victorians.

We hear the history of Labor Party promises about how they would deal with water scarcity and of how they have 'backflipped' on their promises.
We hear how the local protesters took the matter to court, lost, and how the government pursued them for costs.
We hear how the cost of water has already doubled and will keep rising.
We hear how the government has denied that the area where the desal plant is to go is a whale habitat, when it clearly is.
The government preference for poorly costed, big-scale corporate engineering 'solutions' versus multi-objective sustainable local or individual ways of getting water is discussed. 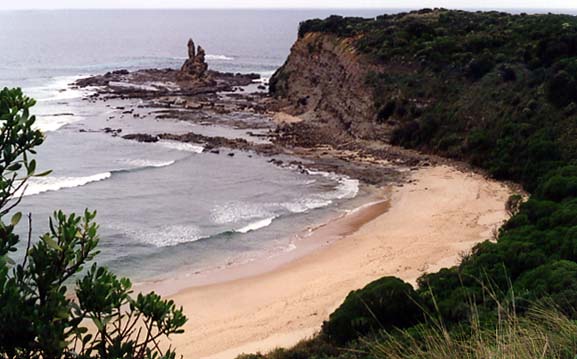 Fresh water dam capacity is a known determinant of a dependent population's capacity. Once dam levels drop below critical levels, water demand has clearly exceeded supply. So logically, rationally, naturally, excessive demand ought to be tempered and curtailed. This is what rationally follows in macroeconomics, like when Australia's Reserve Bank increases interest rates to dampen excess demand. It doesn't suggest we import more.

But governments think they can spin their own reality and now employ communication consultants to evangelise a 'can do' positivism mantra - irrespective of potentially adverse social and ecological consequences. Who considers the impacts of those judgments and decisions on local families and local ecology?

In Melbourne's case, the Brumby Government seems deeply headlong into some artificial life support to perpeatuate Melbourne's population growth. Where's the rationale?
Otherwise, blind unguided, not though through support of Federal mass-immigration pressures the need for 'desalination' as magic pudding panacea for a tide to which the government has set no high water mark - bit risk these days?.

It's Greenspan's 'irrational exuberance' infesting population growth by Brumby's kneejerk, shortsighted and downright undemocratic Victorian Government. But it has nothing to do with central banking in a democratic society, but everything to do with worshipping some growth divinity, and in the process prepared to sacrifice important ecology and Wonthaggi rural amenity values. Is this Brumby's 'pagan-inspired' sprawl infesting Melbourne's still rural outer fringe?

The Brumby Government's unelaborated growth fetish appears too narrowly focused on the supply end of the problem, yet strangely it denies and ignores the obvious root cause and driver of the growth problem - excessive demand. The prime cause of that increasing demand is our federal government's exuberance to maximise immigration.

According to the Australian Bureau of Statistics "at June 2008 there were an estimated 3.9 million people residing in the Melbourne ('Statistical Division'), an increase of 74,600 people or 2.0% since June 2007. Melbourne SD experienced the largest growth of all Australian capital city SDs for the year to June 2008. Melbourne SD accounted for 81% of Victoria's population growth between June 2007 and June 2008, and was home to 73% of Victoria's population."

The prime driver of urban population growth is immigration, current peaking into Australia at 400,000 net this year. That is two new Geelongs every year! Illogically, federal and state governments are hell bent on maximising this immigration and so exacerbating the demand problem.

By resorting to water supply from desalination, which has been shown to extravagant in terms of borrowing costs, in its massive continuous energy demand, and in its wastefulness (byproducts of salts, chemicals and organic sludge), the Brumby government is effectively acknowledging that Melbourne's population is outstripping water resource capacity. Melbourne is simply living beyond its means.

Every time we push the natural boundary of what this country can naturally sustain, we damage it and lower our living standards by allowing more people to exploit the same natural resources - land, water, energy, etc. It's as if our politicians compare us to Hong Kong and have a Hong Kong vision for Australians. Well then they can bloody well go and live in Hong Kong on their credit cards, as long as we don't have to fund them.

It's time that triple bottom line scorecard reporting was applied to measure and reward government performance, rather than locked in the spin government PR. Australia's ecological health and Australians' living standards need to be measured and factored into political performance in quarterly results. What's the benefit in economic growth numbers like say 100,000 new dwellings approved for the quarter, when the Thomson Dam keeps reducing its water capacity and the state is debt burdened with an additional $3 billion to fund a 'desal' plant at Wonthaggi?

And we need to question this 'greater good' utilitarian mindset. At Wonthaggi, the Bunurong Marine Park and Coastal Reserve and Wonthaggi's rural community seem sacrificable for the 'greater' Melbourne? To exploit locals for a greater good is morally wrong. And where is that 'greater' obese Melbourne to end in 50 years time?

This is indeed 'so wrong'. Brumby is doggedly locked in an extravagant and immensely damaging 1950s mindset.

This $3.5 billion desal plant (pre-blowout estimate) is comparable to the Snowy River Scheme commenced in post-WWII 1949. This growth inspired scheme cost $1.16 billion (possibly $7 billion in today's money) to add resource capacity for a growing post-war population. But in the process, the Snowy Scheme tragically castrated the Snowy's wildness and its legend to a trickle. "The creation of the huge Eucumbene, Jindabyne, Blowering and Jounama reservoirs resulted in the flooding of thousands of hectares of land. Two whole towns, Adaminaby and Jindabyne, and numerous farms and homesteads were inundated. Thousands of years of Aboriginal history were also lost beneath the waters. Both Adaminaby and Jindabyne were rebuilt nearby as new towns that were heralded as modern and comfortable. People were compensated by the Authority for their losses and relocated."

The Snowy Scheme did employ hundreds at the time, but destroyed the Snowy, Murrumbidgee and Murray rivers and the way of life of hundreds of established pastoral families that for generations had livelihoods dependant upon these vital flowing rivers.

Fifty years later, a repeat of the Victorian government growth driven 'irrational exuberance' now imposes its undemocratic will on the rural Wonthaggi community and its surrounding natural environment. It is so again an obese Melbourne can exceed its capacity and become even morbidly obese. This is nothing but a government infatuated growth disorder akin to 'bulemic sprawl'.

And Brumby has no ultimate vision as to where this is all leading. He will be Parliamentary pensioned off by that time and he won't care.