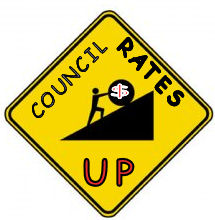 The appalling increase in the Mornington Peninsula Shire's Rates over 10 years is about average for all councils.

There appears to be no price watch or system of discipline by government to keep councils honest so it seems councils increase rates by an amount which they think they can "get away with" rather than focusing on efficiency and keeping rates down.

Comments and suggestions about how we might get some action on a parliamentary review of council rate increases would be appreciated.

Victorian councils have lost touch with reality. In the last 10 years rates have risen by over 100% which is more than almost every other consumer commodity. This includes hospital and medical services, health services, education, food, alcohol, tobacco, petrol, gas and electricity, restaurants meals, take away fast food, domestic and international holidays, clothing and footwear, household appliances, and motor vehicles.

When banks, petrol companies and supermarkets raise their prices there are howls of protest from the public and politicians, government inquiries and price watches. However over the last decade councils have left the price increases of these providers in their wake, and yet not a murmur.

Victorian rates have increased by 30% more than any other state, three times the increase in CPI, and by more than double the increases in wages. Rates just simply cannot continue to rise as they have previously.

In NSW rates are pegged

An urgent parliamentary inquiry needs to be held into the reasons for the outrageous rate increases and how they can be restrained in the future. Perhaps the government should follow the New South Wales government's example which pegs rates. The rise over the past five years is 50% less than in Victoria.

Peace in this country will not survive a government which tells the poor to tighten their belts whilst it sells off vital assets and dines with ostentatious industry moguls seeking public-private partnerships. Our leaders must show that they are prepared for personal sacrifice if they are going to demand it of the rest of us.

President of ACTU, Sharon Burrow, claims that medium income families are paying $60-70 more a week for food and fuel. She says that the inflation is not their fault.

The government is, however, calling for wage restraint.

What is the cost of wages compared to the cost of rent, mortgages, and new roads, tunnels, and other infrastructure to service new suburbs?

What restraints to apply?

Although restraint has to come from somewhere, it would be better to restrain and rein-back housing prices and construction. This would lower a controllable living cost caused by government policy-driven land-speculation and debt. Since oil, the basis of the 20th century’s extraordinary growth is slowly drying up, the Rudd Government must stop supporting the continued expansion of our economy at State and Federal level. We need cooperation from the mainstream press on this, which needs to quickly stop marketing our real-estate globally via www.realestate.com and www.domain.com and similar business vehicles, since this is a major accelerant of land-price rises and real cost of living. Although the Australian CPI has never factored in the cost of land, claiming that it is not a consumable, it has been treated as such in recent times and has had the greatest impact on cost of living. Consolidation must be the order of the day and of our future. Banks, which rely on interest earned from financing this kind of expansion, will have to resign themselves to much lower profits than they have become accustomed to. There was a time when they and we were content with much less. Deposits must be protected at the expense of interest on accounts. The government must step in to prevent hard-won savings from being destroyed in bank crashes and Enron-like implosions.

Restraint must be equitable and the government must lead by example. Peace in this country will not survive a government which tells the poor to tighten their belts whilst it sells off vital assets to private companies and wines and dines with ostentatious industry moguls who want its support to expand their industries and profits. Our leaders must show that they are prepared for personal sacrifice if they are going to demand it of the rest of us. The press needs to support them in this and stop lobbying on behalf of consumerism and expansion. The ABC needs to drop its stable of developer and real-estate ‘consultants’ now.

The government has so far announced that it wants to maintain living standards by maintaining growth through increasing productivity but this means increasing draw down on oil, which will inflate prices even more as well as growing CO2 fumes. It is arguable that ordinary people do not really benefit from ‘productivity’ growth when the owners of property and the means of production are in a position to match every wage increase. Productivity growth is not geared to increase wages, but to increase profits. Whilst wages are paid out of profits, profits these days must also cover expected constant rises in shareholder dividends and huge salaries for CEOs. Public companies have come to rely on a promise of continuous growth to retain and attract shareholders. Where essential industries cannot maintain profits, governments should consider taking these industries over to maintain their services.

How to cope with end of cheap oil?

Constant growth is no longer possible now that global oil production is no longer keeping up with population and economic demand. Per capita global oil production has been in decline since 1979. Western European countries have dealt with this decline earlier and better than the English speaking ones which have employed a Thatcher-Reaganite response of expansion based on debt, economic class divide, and asset stripping.

The Australian government has the task of mediating the impacts of economic decline in Australia. It cannot actually stop this economic decline but it can choose to insulate the poor or to insulate the rich. The pressure is on the government from the rich. Property developers and their financial industry allies are currently trying to get the government to divert budget surpluses to oil and materials intensive works, as reported in the Australian Finanacial review of 8 May 08:

“Industry leaders have urged the Rudd government to use part of future surpluses to fund infrastructure that is unlikely to attract private-sector finance and to dramatically increase the federal budget contribution to urban transport and other projects.”

Although infrastructure projects, the Keynesian economic cure for economic depressions, were valid when oil and materials were abundant, they are no longer valid in an oil scarce world with availability of many materials in decline and the cost of fertilizers and food production rocketing.

The government will need to fund sensible public transport and insulation initiatives to save fuel and ensure that vital services and food production are retained, but it cannot afford to engage any ephemeral budget surplus (if the Howard government really left one) in propping the unreasonable profits of private sector infrastructure corporations. Those industries have become accustomed to inequitable distribution of huge profits based on cheap fuel and a parasitic reliance on bringing in massive quantities of immigrants as customers and workers, which they have achieved by lobbying government.

This financial and development industry reliance on population growth to fund expansion is no longer economically viable even in the short-term It is contributing to the rise in the cost of water, power, food and housing. These high costs make manufacturing in this country extremely uncompetitive against other countries where the cost of land is much less. This has contributed to the destruction of our manufacturing industry and our import/export imbalance. These costs are within the control of the government through the reduction of costly economic activity which is based on the creation of debt for the profit of a few.

Employment is going to start to dry up and this is immediately very frightening if you are paying rent, mortgages or need to drive a car to get to food outlets. Once again, the government can mediate and mitigate the impact of employment decline. There is actually a positive way to deal with this. That is to halve the working day, share the work, and to reduce the costs of living (mentioned above) which are in Australia’s control. Slowing down our economy by stopping expansion will save fuel, save lives, and save time for quality of life and local community strengthening.

See also Mike Stasse on The Challenges of Powering Down