Congratulations to all who organised, prepared, worked for and took part in the rally yesterday Saturday 28 June . It was a monumental task and a great celebration of community spirit. What was so impressive was the amazing diversity of groups and spread of ages of marchers and participants. 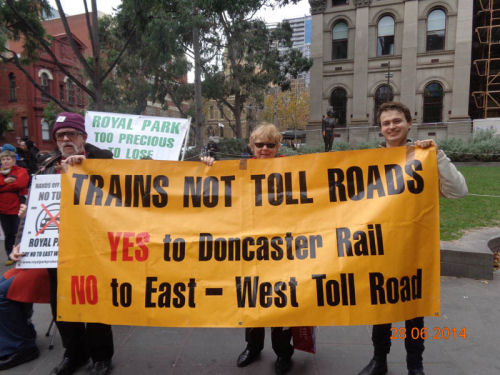 One leader of a community group who has been to lots of protests speaks for many when she commented yesterday after the march in an email:


"That surely was a great rally today in Melbourne, I was in awe during the march from State Library along Swanston St. It was conducted so very well with police on their horses beautifully standing to attention outside Flinders Street station while the speeches continued. Was this really democracy in action?? And how about the beaut little middle-aged lady in a red jacket holding up high a very large poster with a simple six-word message which read STICK YOUR TUNNEL UP YOUR FUNNEL !" Also the writer said: " I have never been to a rally as large, powerful and widely representative. All credit to the organisers and speakers too! 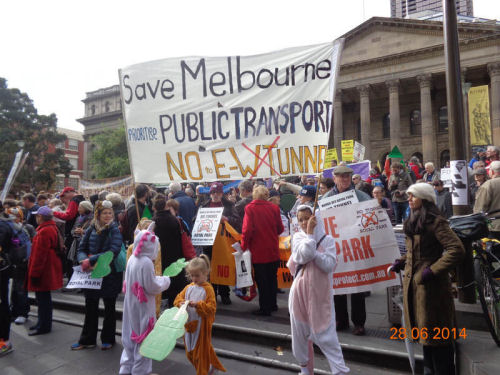 See the Gallery of Photos (9 in all) in the Age: http://www.theage.com.au/photogallery/national/east-west-link-tunnel-protest-20140628-3b0h9.html This is entitled "East West Link protestors marching through Swanston Street in Melbourne on Saturday 28 June 2014. Photos by Luis Ascui." Note on Page 2 of the Age the photograph of the sign held by a resident of Travancore "5200 trees Axed for EW Link - Say No Way!" (This is referring of course to Royal Park.) 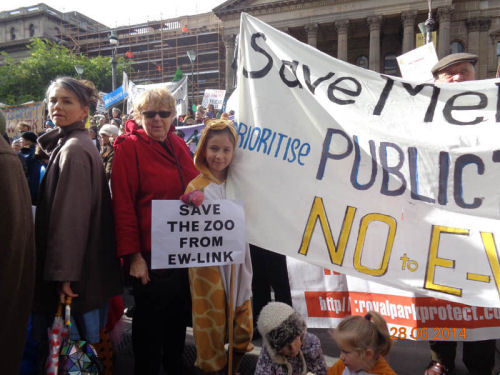 The photos illustrating this article were taken by Jill Quirk. They are of the banner with the iconic message "Trains not Toll Roads" (with the Royal Park banner in the background) and of the children of the Save The Zoo contingent, dressed as Zoo animals gathered outside the State Library waiting for the rally to commence. I would particularly like to thank the Moreland Community Against the East-West Tunnel (MCAT) and their Save The Zoo Children's group. Also Rod Quantock our PPL VIC President who did a Pied Piper act and led the children and Royal Park groups at the front of the march. I understand that Channel 2 and 9 covered the rally but have not yet seen the record.

Planning is about political manoeuvring and manipulating

The Minister has stated in his approval that he does ‘not rely on a business case’ and further that it is ‘not necessary’ for him to do so. He states it is sufficient that it is enshrined in Plan Melbourne. This is the haphazard the undemocratic nature of what's called "planning" in Victoria. It's authoritarian and non-transparent. Mega-decisions are made without proper discussion with the public. The Minister has accepted the adverse impacts on Royal Park and the Zoo of the Elliott Avenue interchange and determined this will not proceed. We used to have the naive idea that politicians were employed to act on our best interests. Now, they are captured by corporate lobby groups that are more powerful than democratic processes. The 'business case' is not necessary, as the costs of the unwanted EW link will be ultimately paid by tax payers. The decision by the Minister also flies in the face of the groundswell of community opposition to the East West Link demonstrated by the thousands of people who turned out for the Trains Not Tolls rally on the steps of the State Library on Saturday. Planning is about political manoeuvring and manipulating, not actually enhancing and protecting Melbourne as a liveable city. We don't need to justify ourselves to the international community, by having the tallest towers, the biggest freeway or tunnel, or be the biggest city compared to Europe! We don't want big population growth, and the costs involved. Plan Melbourne is not about catering to a "projected" population growth to double by 2051, but a self-fulfilling prophesy to ensure this happens - by luring people to Melbourne to buy houses and apartments. Already Melbourne is changing too fast, and is unstable. The results are crime, homelessness, vagrancy, poverty, rising costs of living, inadequate schools, and cuts to public services. The best way is to leave Melbourne.