Tasmania, West Australia, Victoria - our wildlife are ignored by government 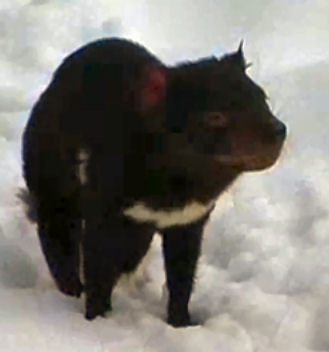 Photos of Tasmanian Devils are from this wonderful you-tube movie by Chris Coupland of a devil in the snow at Cradle Mountain. (The music may not be to everyone's taste but it suits the devil's walk.) Note that Tasmania's devils are so inbred due to isolation that somewhere round half now suffer from a fatal mouth cancer. For this reason vigilance must be of highest order.

Fauna protection in every state is a disaster!

Victoria isn't the only state that has received terrible criticism of their administering of fauna protection laws.
You only have to google for Auditor Generals' reports on fauna to come up with them for most or all states in Australia. Here are some examples: 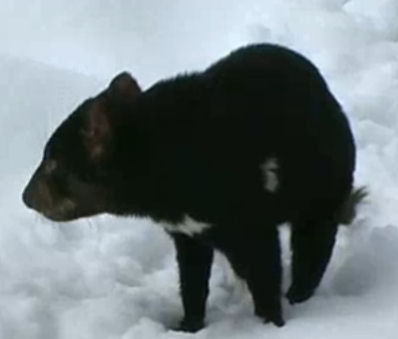 A damning report on the state of Tasmania's rare and endangered species by Australia's Auditor-General, was released in March, 2009 and among may issues notes how only 2 of Tasmania's threatened species have full recovery plans in place.

Tasmania's Southern Forests are habitat-in-crisis for many of these species. 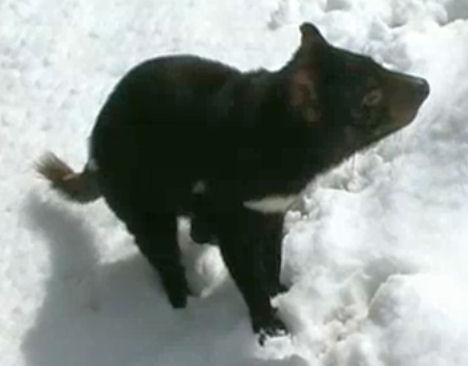 “It was pleasing to find evidence that private forest covenants had been numericallyeffective but that only two public authority management agreements, which provide an effective mechanism to allow public sector entities to commit to arrangements for management of species and habitats, had been made.

Another concern was that the existing organisational structure did not encourage a strategic approach to conservation of threatened species, their habitats and the threatsconfronting them. However, a divisional plan with clearly defined objectives exists and performance against the plan was regularly monitored and results published.
The Report includes 19 recommendations primarily aimed at introducing a structuredand prioritised approach to managing Tasmania’s threatened species with a focus on assessing implementation plans and monitoring progress.”

With WA’s list of threatened species now over 600 and rising, Auditor General Colin Murphy has found that recovery action is not happening for most, and few are improving.

In his report tabled in Parliament today titled, Rich and Rare: Conservation of Threatened Species, Mr Murphy found that, in many areas, the Department of Environment and Conservation (DEC) is not providing effective protection and recovery to WA’s threatened flora and fauna.

“Only a handful of threatened species are actually recovering, while the number of species on the list continues to grow,” Mr Murphy said.

“My office has found that only one in five threatened fauna, and fewer than half of threatened flora species have recovery plans, and those plans that are in place are often not fully implemented.”

A major obstacle to DEC’s performance is the long delay in drafting a Biodiversity Conservation Act, to replace the existing Wildlife Conservation Act 1950. DEC has pursued updated legislation for over 20 years.

The current legislation restricts DEC’s ability to effectively conserve threatened species; existing protection measures are largely inadequate, and DEC does not have the power to access threatened species on private property to implement much-needed conservation action.

The report found that multi-species approaches to conservation can be effective in dealing with the growing number of threatened species.

“DEC is undertaking a number of multi-species approaches. For example, the Western Shield program has improved the status of several native mammals,” Mr Murphy said.

“DEC is also acquiring land to secure species habitat, but less than half the nationally agreed target has been reserved in WA.”

The Auditor General’s report found a number of other areas for improvement, particularly:

“Increasing numbers of threatened species and the size of WA present a significant challenge for DEC,” Mr Murphy said.

“Achieving the right balance between programs which benefit large numbers of species at once, with those targeted at individual species’ needs, will be critical.”