Families deserve maximum government support up to two children, then none!

A key solution to the global big family culture is for affected national governments to impose a consistent, long-term, mandatory financial combination of carrot and stick initiatives upon their populations, as well as from the United Nations/World Bank upon those national governments delinquent in population control.

The human global message is: Families must receive no public benefit beyond 2 children.

This is morally superior to China's one child policy. If the global community were to research the Catholic and Mormon culture of more wealthy western nations, they would realise that the burden and impost of big families upon the planet are far worse because the offspring consumerism demands are infinitely more extravagant. The United States is where the big family luxury problem lies.

While human family size is nothing to do with urgent humanitarian relief such as in neglected Haiti (Third World and overpopulated) following the Jan 2010 Earthquate, Haiti's extremely wealthy neighbour, the United States, has a neighbourly moral obligation to lead and finance the humanitarian relief and rebuild the social and economic infrastructure of Haiti.

While human family size is nothing to do with urgent humanitarian relief such as in Pakistan (Third World and overpopulated), following the July 2010 Massive Floods, Pakistan's extremely wealthy neighbours, India, China, Russia and India's nearby oil rich Arab nations NO DIFFERENTLY have a neighbourly moral obligation to lead and finance the humanitarian relief and rebuild the social and economic infrastructure of Pakistan.

Indeed, worse than Haiti, given the pre-existing civil unrest associated with the Taliban and Al Qaeda terror threats, the real risk is that Pakistan could else fall into civil collapse and another war zone like Afghanistan. Cheaper to care for Pakistan now than wait until it becomes a terrorist haven. This is not rocket science!

India's egotistically extravagant multi-billion Commonwealth Games should be cancelled! It is costing in excess of

The Indira Gandhi International Airport modernisation alone is costing nearly US$ 1.95 billion! [Read More] This is a comparable value to the crop losses from the Pakistan floods over India's border. [Read More]. And yet Indians and Pakistanis are the same ethnic people with mixed Hindu and Muslim religions, divided in 1947 by a tyrannical colonial Britain. 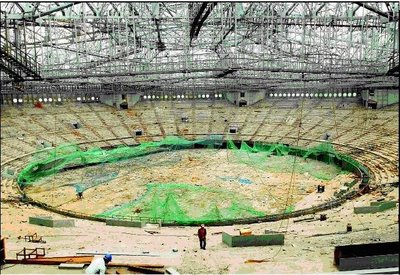 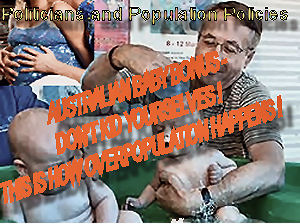 Australia is heading down the same way as the countries which John Marlowe uses as an example here. We are being treated like just another colony. There is nothing about our prevailing 'race' or 'ethnicity' that protects us from a colonial-style government that wants to maximise population for commercial reasons that have nothing to do with democracy.

Aid should only be given if communities accept family planning

Today, there are 6.9 billion people on the planet; in 40 years, this figure will reach 9.2 billion. Most political leaders, however, are reluctant to examine the matter. The term "population control" has connotations too sinister for many, even though it can simply mean sensible family planning. For example, if Niger's current growth rates of 3.3 percent per year remain unchanged, by 2050 their population will have reached 50 million. The current population is 15.2 million - and even at this level there is widespread malnourishment. Nearly one child in five dies before the age of five. Almost one in three does not attend primary school. The average Nigerien woman gives birth seven times in her life, the highest number in the world. The latest census data shows that Jakarta is home to around 9.6 million people, or 4 percent of the total population of Indonesia, the fourth-most populous nation on the planet. According to a report from the United Nations Population Fund, more than half the world’s population were living in cities in 2008. This puts massive strain on infrastructures for health, sanitation, food and water resources, not to mention waste products. The world has an image of Ethiopia based on the terrible events of 1984-5 when up to one million died of starvation and when rock stars in the United States and Britain sang ‘We are the World’ and ‘Do they know it’s Christmas?’ to raise money for famine relief. At the time of the great famine Ethiopia had a population of 40 million. It now has 80 million people and that figure could double again in the next 25 to 30 years. Expecting aid to multipy at the same rate is idealistic. Peoples must take responsibility for their own futures. Childbirth is not mandatory and humans must determine their own fates. Unless the tide of population growth can be stemmed, and reluctance to address this topic is overcome, then any aid given is simply swallowed up by more people! Nobody can mop up the floor while the tap is still running. If, due to religious and cultural sensitivies, communities refuse to accept family planning advice and practices, then aid should be abandoned. Family planning is the norm in the West, so why should those in developing countries, where it is urgently needed, be offended by offers of help?

As I mentioned in my earlier comment, many people believe that large families have been commonplace throughout history, the norm for most people. You can't survive in an agrarian society unless you have a large family, so they say. Western society they believe has strayed from this historical norm by embracing small families, for good or ill. I strongly suspect this is bunk, that small families of 1-3 children have been the norm throughout history. Probably people aspired to large families, but few could achieve it due to huge childhood mortality. Modern medicine, nutrition and sanitation have enabled large families to become commonplace in many countries - but this is a brief historical anomoly. One way or the other, small families will once again become the norm across the world.

I agree with you 100%. It's clear that large commercial enterprises encourage policy makers to promote reproduction in order to sell more consumer goods. They claim we must have Economic Growth which means we must have more children who will need more food, clothing, health insurance, educational materials, and when they marry must have a house (and a Bank Loan), a car, a fridge, a tv etc etc. And if civilized inhabitants of first world countries won't breed enough children to keep corporate sales and profits up; then they will simply offer incentives to Government officials to increase immigration from backward, third world countries who will breed as many children as they can. Of course, we will be asked to support them through increased taxes. I for one have had enough! David Anning.