The victories against the privatization of Madrid's public health system, of the Gamonal neighbourhood standing up to speculators and the corrupt, of the cleaners in their battle for jobs in the capital and the struggle against evictions and the banks, are good examples. 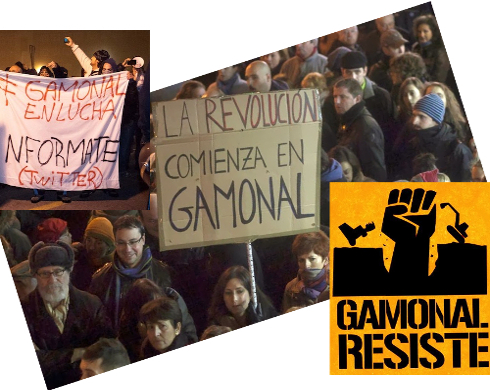 It is not easy to achieve concrete victories when the political class betray our rights and sell out to capital. It's hard to win when the state apparatus defends the haves, and rolls back our democratic rights and freedoms. The task of change is arduous, when the media are hijacked by private interests. Still, there are victories, big and small, showing us the way.

The Madrid government's u-turn on its plans to privatize six public hospitals is one of them. The [Popular Party-run] administration in the capital has been forced to revoke the "outsourcing" plan after fifteen months of protest and the announcement of the High Court of Justice of Madrid to provisionally suspend the privatization process on the grounds it could pose "serious and irreparable damage." There have been months of demonstrations, strikes, a referendum with nearly one million votes against such measures, hospital occupations, lawsuits. The triumph swept away its leading promoter, regional health commissioner Javier Fernández-Lasquetty, who has been forced to resign. It's worth the fight.

Gamonal, another great victory. After little more than a week of intense protests, from 10 to 17 January in Burgos, against the construction of a boulevard in the neighbourhood of Gamonal, mayor Javier Lacalle had no choice but to halt construction indefinitely. The conflict, however, came from afar. A multi-million euro project, with huge profits for firms and politicians of the day, in a working-class neighbourhood lacking investment and amenities. The "urban" conflict in Gamonal became the spearhead of the fight against corruption, land speculation and crisis.

Demonstrations were held across Spain in solidarity with the community. And the attempts to criminalize and spread misinformation failed. It's worth the fight.

Thirteen days of strike and tons of debris around Madrid were necessary to avoid 1,134 layoffs of street cleaners and gardeners of the City of Madrid. It took an indefinite strike to paint into a corner private contractors that not only wanted to have hundreds of workers, but to carry out pay cuts of up to 43 per cent. The victory was partial because the staff had to each accept 45 days temporary furloughs (unpaid lay offs) annually over the next four years, and a wage freeze until 2017. Still, this does not detract from an indefinite strike, unprecedented sadly in this day and age, succeeding in protecting every single job. It's worth the fight.

The fight against evictions has been, without a doubt, the ultimate expression of a collective rebellion against this con-trick of a crisis. In response to the unlimited usury of the banks, people organized at the grassroots. Over a period of more than four years, the Platform of People Affected by Mortgages (PAH) has managed to stop 936 evictions, rehouse 712 persons in empty properties owned by financial institutions and today occupied under the Obra Social campaign of the PAH. And it has forced many banks to negotiate hundreds of repossessions and social rent. Some will say that is very small progress compared to the overall offensive. That's true. However, I would put that to all those who thanks to the PAH have a roof over their heads. It's worth the fight.

Since the emergence of the indignados, or 15M movement, we have gone from "They do not represent us" to "Yes we can." We have regained confidence in ourselves. The offensive by capital continues, but our indignation and disobedience increases. Victories today are catalysts of the victories of tomorrow. Struggle is imperative to change things. We must take note. And if we do, we can win.

>Esther Vivas is a Spanish journalist and activist. This article first appeared on her blog esthervivas.com. Translation by Revolting Europe.