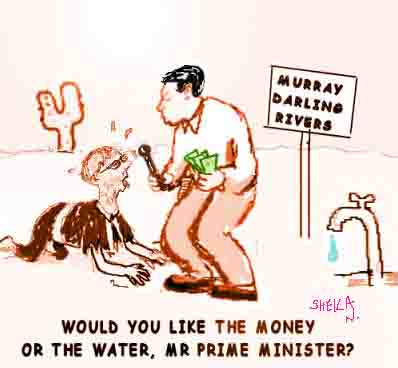 Last month, Fair Water Use contacted the Chairman of the Murray-Darling Basin Authority, Mr Mike Taylor, urging him to clarify the priorities of the Authority.

It appears that the advice was heeded.

In a statement received yesterday (11th January), Mr Taylor has affirmed that the Authority is legally obliged to place the health of the river system ahead of all other considerations.

This news should be applauded loudly. It is now generally understood that if the ecological decline of the Basin is not reversed, a bleak future awaits all who wish to utilise its waters.

Australians now seek confirmation that the MDBA is walking-the-walk: A highly significant first step would be for it to do all possible to ensure that the entire system reaps the environmental benefits of the inundations that have blessed much of its northern headwaters.

If Mr Taylor feels he is unable to achieve such an outcome, then the Commonwealth must be encouraged to invoke urgent legislation to enable him to do so - now and in the future. Failing that, the Authority should be put out to pasture, as was its predecessor, and a new, entirely independent body established; one invested with the powers to enable it to truly act as the guardian of the Murray-Darling.

Should a declaration of a state of emergency be able to facilitate these changes, then the Federal Government should be aware that resistance to such a move has collapsed in recent months: it could well be a very sound and defining decision in this election year.

Steven Soloman, who recently published a world history of water in, "Water, the Epic Struggle for Wealth, Power and Civilisation," talks for one hour and 9 minutes on video here.

Solomon talks about the ownership of fresh water throughout history and how it's propriety led to the development of civilizations from Europe to the American Industrial Revolution. He says that renewable water sources are diminished and asserts that water is "the new oil," which has created developmental fissures between states that have it and those that don't. He discussed his book at Politics and Prose Bookstore in Washington, DC.