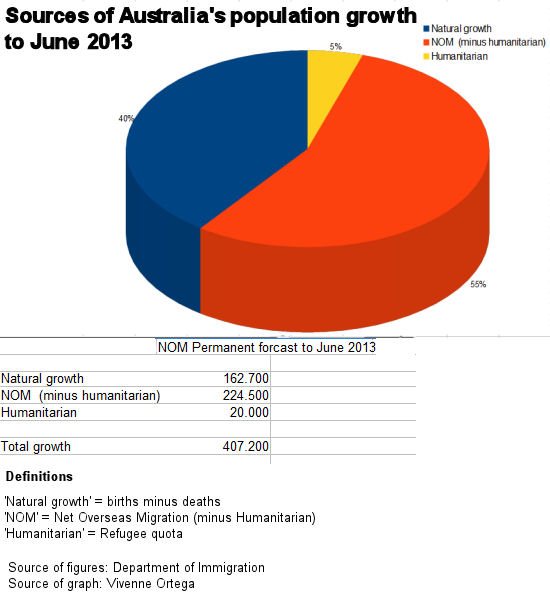 The move is decidedly contrary to the interests of Australia’s population, which their government is supposed to represent. Australia now has 728,600 people unemployed according to January ABS figures, a rate of 6% up from 5.8% in December. These figures do not include the underemployed who, if they work more than one hour a week are not classified as unemployed. Unemployment and underemployment are rising, but numbers of persons in employment remain steady although Australia's population rises by about 1.8% in a year. This situation hardly justifies making it easier for employers to import excess labour.

The increased population growth due to immigration to Australia, of which skilled migration is the largest category, carries many costs. It places stress on and causes inflation of prices for accommodation, infrastructure and services, including scarce power and water resources. This inflation and stress affects the supply and affordability for the incumbent population as well as for immigrants.

It seems that the Australian government is simply pouring Australia as an entity down the drain. The government seem to have completely lost sight of their responsibilities in this matter.

It is in fact the responsibility of governments to provide an interface or buffer between capital and labour, in the current economic paradigm.

The profit imperative of big business in a neo-liberal world means that business pays no attention to the issues mentioned, is out for itself, and hell-bent on clawing an advantage out of the mix of public resources available to it.
It is the government’s job to temper this and to protect the Australian people. Closures of car factories in Victoria – Ford (in 2016) and Holden and Toyota (in 2017) will be very hard on the workers who lose their jobs, on their families and on the communities where they spend their money. This seems to be the proverbial 'no brainer’ that Australians need to be catered for in Australia's job market. If Australians are unsuitable for jobs here, why would people imported over 1000s of Kilometers, sight unseen, be more suitable?

It is interesting that in water-starved West Australia, the population growth rate has recently varied between a whacking 3.7% and the current huge 3.3%, thanks to Enterprise Migration Agreements with mining operators such Gina Rinehart. Workers are imported to lay pipes for gas companies, to spray water to settle dust in iron ore operations and for other laboring functions. According to the rules, these 457 workers must find more work within 4 weeks of a job ending. If they work one hour a week that enables them to stay - but how do they support themselves?

They then must rely on any charity and goodwill around them like other unemployed people. This is hardly a contribution to Australia’s economy!

The same observer, who has spoken to young people from Europe in West Australia, reports that that Australia is very attractive to European youth, as, being a commodity economy, the impact from the Global Financial Crisis has been delayed. These young Europeans come to Australia as students, and after completing or during a short course, move into the workforce – as waiters or cooks, for instance. If they are lucky enough to get sponsorship, they can then stay. This is a happy ending for the young person but what about Australia’s youth?

The other section of the workforce to be concerned about is the over 45s, many of whom find it difficult to get another job after losing one, even if extremely well qualified.

We seem to be well on the way with the government giving the situation a big helping hand.

We may as well allow vested interests run our government!

This undemocratic and unpatriotic move is malignant considering the welfare bill blowout, unemployment rate, and the threatened end to the Age of Entitlements! The White Australia policy has been condemned and pushed into our history books, but it was more than about skin colour. It was about protecting our work force, our employment opportunities and our standards of living from the masses of those would have flooded our country from the Third world. Gina Rhinehard says that the welfare costs are too high and digging a hole in mining profits. Africans are willing to work for $2 a day! This move by stealth is a threat to wages and working conditions, and will push down Australia's living conditions to be more competitive with Asia and Africa. Immigration in Australia is out of control. We may as well give the role of government to mining industries, global and national wealthy corporations, and property developers! Policies that control our population growth and immigration are being left to those with vested interests, at the cost of the community.

"It is very important that we establish and defend the sovereignty of our borders... One of the reasons why it's so important to maintain that policy is that the more people think our borders are being controlled the more supportive they are in the long term of high levels of immigration. Australia needs a high level of immigration. I'm a high immigration man." – John Howard, RN Breakfast program, 29/01/2014 #fnImmg1" id="txtImmg1">1

Hopefully we can get a political party, which promises to charge this government, and past politicians, for treason and sentence them accordingly.

#fnImmg11" id="fnImmg1">1. #txtImmg1">⇑ Editor's comment: The story was not found here – could you post the URL of the program? An example of a "URL" (Uniform Resource Locator) is:

"NEW evidence of the hijacking of Labor’s flagship social housing scheme has emerged, with the companies behind a major Sydney development tapping $80 million in taxpayer subsidies to help build units for wealthy foreign students rather than the low-income Australian households the program was designed to help. Earlier this month, The Australian revealed that universities had won thousands of grants under the National Rental Affordability Scheme and were filling hundreds of these government-sponsored units with fee-paying international students. The revelations have prompted one of the architects of the scheme — National Shelter executive officer Adrian Pisarski — to call for changes to ensure it delivered truly affordable housing to those in need. “As one of the people who thought up NRAS in the first place, the original intention was not (for it) to be used for international students. The intention was to house low- to middle-income Australians,” he said. “To the extent to which it’s happening, it needs to be monitored and the intention of the scheme allowing that needs to be reviewed or at least given serious consideration. It should not be what the NRAS becomes.” He said there was evidence some international students faced difficulty in the private housing market and some student housing for them could be part of the mix, but the overall goal was to address the dearth of options for those on low wages. The $4.5 billion NRAS was launched by the then prime minister Kevin Rudd in 2007 as part of his public campaign to tackle homelessness and the “BBQ stopper” issue of rising housing costs for struggling Australians. It was designed to provide subsidies to developers of housing that would be rented to “low- and middle-income households at a rate that is at least 20 per cent below the market value rent”. A promotional brochure issued by developers Frasers Property Australia and Sekisui House Australia, and seen by The Australian, tells would-be investors in the Central Park development in central Sydney the project is “NRAS-advantaged” and that foreign students pay higher fees than locals, with their total expenditure topping $55,000 a year. “This provides some guidance as to the calibre of tenant typical of off-campus student accommodation facility such as Abercrombie Street,” the document says." [...] Read more (for a fee) from that Big Population promoter, the [Anti-]Australian, here: http://www.theaustralian.com.au/national-affairs/alp-housing-scheme-abused/story-fn59niix-1226850865063

Based on year ending 2013 figures, humanitarian and asylum seekers formed less than 5 % of our population growth, yet the media gives them almost 100% of air time! The rest are lost, or ignored. The mass of our immigration figures are from skilled migration, and family reunions, etc. There was an interesting revelation in an article recently. The executive director of the Australian Mines and Minerals Association, Scott Barklamb, slammed the unions for using scare tactics regarding the loosening of "red tape" preventing businesses hiring foreign workers on 457 visas. ''The resource industry is not a large user of skilled migrants, but we do welcome any move to ensure that when employers do need to access overseas skilled labour, they cando so through an efficient and responsive system,'' Mr Barklamb said. Read more: http://www.smh.com.au/federal-politics/political-news/panel-reviewing-45... Wasn't Kevin Rudd's rationale for increasing the number of skilled workers because of the mining boom, and their chronic skills shortages? Now, they are saying they don't are "not a large user of skilled migrants"!!! They would prefer the willing and flexible from (mainly) third world countries, who ultimately want a good work record, and then have their employers sponsor them for PR.