In a cruel twist of irony, the Japanese town Taiji, made infamous by Oscar-winning documentary, The Cove, will open as a marine mammal park.  In response to the outrage caused by the film, the Japanese government will re invent the town of Taiji, to give the thin facade of respectability as a marine “nature reserve”. 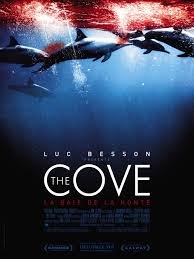 Swim with dolphins, then eat them in a cafe?

The killing fields of Taiji cove, that once ran red with the blood of dolphins and small whales, will be turned it into a place where people can swim and kayak alongside the animals, once they are released for the purpose.

Visitors will be able to swim with dolphins, but they will not be wild and free-ranging but released from captivity especially for the occasion! Dolphins and small whales be be utilised to attract tourists.  It's a shallow stunt, a bogus "marine park", where the main attraction, the animals, will be no more than participants of a film set.

The plan calls for the creation of a whale safari park stretching roughly 28 hectares by putting up a net at the entrance to Moriura Bay in northwestern Taiji, the official said. The town caught 1,277 dolphins in 2012 and has licence to capture 2,026 this season, which began in September and runs until August next year.

People in Taiji argue that dolphin-hunting is part of a 400-year-old whaling and culinary tradition. They charge that campaigns against it are cultural imperialism, just like Australia's objection to them slaughtering whales in our domestic and international whale sanctuaries. With Australia's continuing to exploit cattle and sheep in the atrocious live export trade, we can hardly express any superiority with regards to animal welfare! However, they assume that “tradition” gives validity and righteousness.

Once the visitors have communicated and enjoyed the company of their swimming mammal-friends, they can then taste samples of "marine products" including whale and dolphin meat!

"We already use dolphins and small whales as a source of tourism in the cove where dolphin-hunting takes place," Masaki Wada, a town official, told the Japan Times. "In the summer, swimmers can enjoy watching the mammals that are released from a partitioned-off space…This is part of Taiji's long-term plan of making the whole town a park, where you can enjoy watching marine mammals while tasting various marine products, including whale and dolphin meat." He almost makes it sound appealing!

The slaughter will continue, moved to another bay 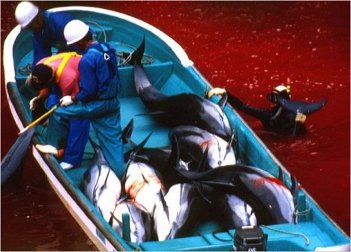 Nearby, Hatakejiri Bay, will be the new place of slaughter! It will be used to select a few dozen animals for sale to aquariums and marine parks, and the rest will be stabbed to death for meat. The bloody and grotesque killing will continue, along with selecting dolphins that will be captured for human entertainment, and these "lucky" others will swim with seemingly benign tourists, who after will be able to taste dolphin and whale meat!

They're not stopping the slaughter, but they are going to direct more attention to it with a theme park and collect tourist money! The Japanese tourists can pay to be entertained by these majestic creatures then eat them!

Dolphins are known to "suicide" in captivity

Most are slaughtered and die swimming in their own blood and that of their family members.  The rest are sold into a grim life of captive display — of performing circus tricks for dead fish and swimming endless circles in a tiny tank.  It's a fact that one of the major causes of death to captive dolphins is suicide.  They smash their heads against the enclosure walls enough to kill themselves, to escape their watery hell.

Japan still does not understand the concept of conservation, of marine sanctuaries, or have a cultural understanding of enjoying marine wildlife safe in their natural environments.

The Southern Ocean Sanctuary was adopted by the International Whaling Commission in 1994 to provide long-term protection for around three-quarters of the world's remaining whales.  Japan was the only voting nation to dissent. What Japan calls whale "management" is really thinly-disguised hunting. What part of “conservation”, and “sanctuary”, does Japan not understand? It's obviously lost in translation.

Japan's relationship and interaction with marine mammals is no more than smoke-and-mirrors, a thinly disguised form of exploiting a seemingly “free” ocean resource for their own ends.