(Ultra-resistant mutant bacteria--more frightening than sci-fi movies from the 1980s. Film still: The Fly)
Antibiotics are the wonder drugs of modern medicine. They've allowed doctors to save and extend life by killing infection and enabling ground breaking surgery.
England's chief medical officer, Dame Sally Davies, says that antibiotic-resistant bacteria posed a ''catastrophic threat'' to human health, and likened it to the dangers of terrorism.
Factory farms are artificially accelerating the evolution of superbugs, and are bringing us closer to the day when antibiotics won't work.

Antibiotics are the wonder drugs of modern medicine. They've allowed doctors to save and extend life by killing infection and enabling ground breaking surgery.

Multi-resistant organisms arise naturally, by spontaneous mutation or when the genes for resistance are passed on from other bacteria. Their presence is encouraged by the frequent use of "broad spectrum" antibiotics. The bacteria however can be spread from person to person, usually on hands.

In India, where antibiotics are not restricted in their use, a new superbug, New Delhi metallo-beta-lactamase or NDM-1, has evolved. Not only is it deadly in its own right, it's also capable of genetically modifying other bacteria to make them superbugs.

Dame Sally Davies – superbugs likened to the threat of terrorism

England's chief medical officer, Dame Sally Davies, called for worldwide action to combat antibiotic-resistant bacteria that she said posed a ''catastrophic threat'' to human health, and likened it to the dangers of terrorism.

“Superbugs” MRSA and C difficile have been reduced to low numbers in hospitals, but there has been an alarming increase in other types of bacteria including new strains of E coli and Klebsiella, which causes pneumonia. These so-called "gram negative" bacteria, which are found in the gut instead of on the skin, are highly dangerous to older and frailer people.

Routine operations such as hip replacements could become fatal in just 20 years time if we lose the ability to fight infection, she said.

Dame Sally said the problem is “as important as climate change for the world” and urged the Government to raise the issue when meeting political leaders at the G8 summit in London in April.

Thomas Riley, a professor of Microbiology at the University of Western Australia, is an expert in Clostridium difficile, or C diff, a
common bug which comes in various strains and can cause severe gut problems.

Professor Riley said he believed there was a “massive under-reporting” of the bug, and health departments around the country had been too slow to respond. . The 244 super strain had gone from being non-existent in Australia to being the third most common strain of C diff, accounting for five per cent of tested cases.

Growing use of antibiotics in food production

Antibiotics have been over used to promote growth in farm animals for decades which probably presents as much of a threat to human health as over use in medicine. It was only a matter of time that pathogens became resistant to antibiotics. They have been over used for decades in food production as they were found to promote growth in farm animals.

As for E. coli, Dr. Michael Greger had this to say during an interview with Kathy Freston of the Huffington Post back in 2010:

"E. coli is an intestinal pathogen. It only gets in the food if fecal matter gets in the food. Since plants don't have intestines, all E. coli infections--in fact all food poisoning--comes from animals. When's the last time you heard of anyone getting Dutch elm disease or a really bad case of aphids? People don't get plant diseases; they get animal diseases.

The problem is that because of the number of animals raised today, a billion tons of manure are produced every year in the United States--the weight of 10,000 Nimitz-class aircraft carriers. Dairy cow and pig factories often dump millions of gallons of putrefying waste into massive open-air cesspits, which can leak and contaminate water used to irrigate our crops. That's how a deadly fecal pathogen like E. coli O157:H7 can end up contaminating our spinach."

Factory farms are artificially accelerating the evolution of superbugs, and are bringing us closer to the day when antibiotics won't work.   Artificially and unnaturally cramming animals together, in all weathers, with little room to move, and forcing them to grow and produce far beyond the level they would in natural circumstances, means that they will routinely get ill.

Pigs and other animals on factory farms are fed a steady diet of drugs to keep them alive in these unsanitary, stressful conditions, increasing the chance that drug-resistant superbugs will develop.

According to Food and Drug Administration (FDA)'s latest report, sales of antibiotics for human use has remained fairly constant over the last decade, but the amount of drugs sold for meat and poultry production has been increasing steadily. Worldwide, doctors, public health experts, and medical organizations have not only acknowledged the pressing concern of antibiotic resistance caused by overuse in industrial farm animals, but have also called for a change in the status quo.

Superbugs are the byproduct of unsustainable meat production, in particular, the overuse of antibiotics in Contained Animal Feeding Operations (CAFOs), or factory farms. Factory farms suck up 70 percent of America’s antibiotics. And worse, they use most of ‘em on healthy animals!

Intensification of cattle farming systems is progressing rapidly overseas. Now new dairies are being established, each with several thousand cows. There is no support for small farming systems, like those common in Western Europe. Cows are never allowed onto pasture and are loose housed in barns, where they used to be tethered. They are milked by robots and live on wet concrete covered in excreta.

Even meat labels “raised without antibiotics” isn't safe. It can be contaminated with MRSA (superbug methicillin-resistant Staphylococcus aureus) at the farm, by slaughterhouse workers who carry MRSA or by other meat, if processing equipment is not “cleaned out between runs of certified organic and non-certified organic meats,” say the researchers.

The abuse of antibiotics on farms was one of the late Sen. Ted Kennedy’s last stands. “It seems scarcely believable that these precious medications could be fed by the ton to chickens and pigs,” he wrote in a bill called the Preservation of Antibiotics for Medical Treatment Act of 2007 (PAMTA), which has yet to pass.

Population growth and urbanization are forcing livestock into smaller and smaller allotments, and dependence on antibiotics.

Approximately 140 vaccines are registered for use in livestock and companion animals in Australia. Many more animals are vaccinated each year than humans. 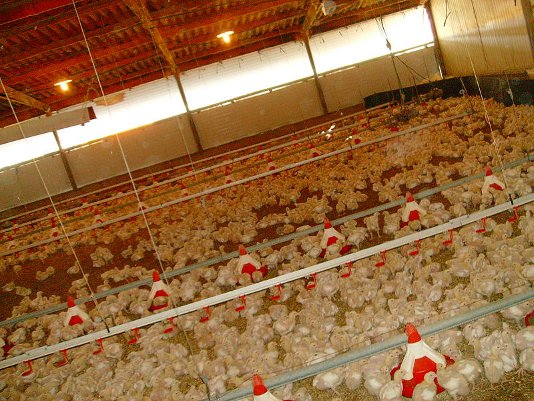 Common sense and intuition says that we urgently need to reduce antibiotic use in food production to preserve life-saving antibiotics for the treatment of common diseases.   Either eat organic foods, or steer clear of livestock products and go vegan.
Meat Free Week- 18th -24th March

Next week is Meat Free Week, 18th - 24th March, 2013.  The avoidance of deadly surgery should be an incentive to start a new diet  - if the welfare of animals, human health and the environment isn't enough!

A widely feared superbug has contaminated hand-washing sinks in Dandenong Hospital's intensive care unit, causing 10 patients to fall ill with the ''nightmare bacteria'' that have killed many people worldwide. The Age: Nightmare superbug alarm The 440-bed hospital in Melbourne's south-east has been struggling to contain the multi-drug-resistant bacteria since 2009. The hospital is preparing to replace some sinks, suspected of spreading disease through splash-backs off the drain. Two weeks ago the director of the US Centres for Disease Control, Tom Frieden, labelled CRE ''nightmare bacteria'' because of their resistance to nearly all antibiotics and their high mortality rate. Some types are estimated to kill up to half of the people they infect. While there have been reports of CRE (Carbapenem-resistant enterobacteriaceae) in about 200 US hospitals, the superbug is thought to be an emerging issue in Australian hospitals. “These are nightmare bacteria that present a triple threat,” said Thomas Frieden, director at CDC, in a USA Today report. “They’re resistant to nearly all antibiotics. They have high mortality rates, killing half of people with serious infections. And they can spread their resistance to other bacteria.” CDC and other officials warn that if the CRE isn't contained soon, even common infections — urinary tract, pneumonia, diarrhea, could become lethal. That's because, the biggest threat from CRE, is that it can share its antibiotic resistance genes with other bacteria, which are more common, such as E. coli. The CRE emergence, and similar resurgent and new diseases internationally, constitutes the potential for "ecological holocaust". New 'Nightmare Superbug' Overuse and improper use of antibiotics over the years, both in the medical community and the livestock industry, has led to an increase in the number of bacteria that are drug-resistant. Doctors are getting better at proper use of antibiotics, the CDC reports, but they could do more. The livestock industry could be doing a lot more. Germany's Ministry of Agriculture and Consumer Protection recently announced its intent to force farmers to reduce the amount of antibiotics given to livestock, a practice most scientists agree increases the likelihood of bacteria mutating into antibiotic-resistant forms. An article in the Medical Journal of Australia says that a ''plague'' of multi-drug-resistant bacteria that would make many illnesses untreatable.