Estonian House, West Brunswick, 24th February
……………………………………………………………………………………
The crux of this meeting, as presented by Moreland planning staff, is that the previous agreement was voided root-and-branch by the State Government, and in the newly planned Neighbourhood Centres, the allocated zones have been changed somewhat (no-one seemed to recall being given prior notice) and also the previously agreed 3-storey limits (all achieved by quite verbally violent public activity!) have morphed into 4-storey. In the course of the meeting it turned out that 4-storey was not 4-storey mandatory but 4-storey discretionary! The council "hoped" they could make them mandatory. It was impossible despite direct and explicit questioning to find out what was the actual upper height limit is right now, or even if there is an upper height limit. 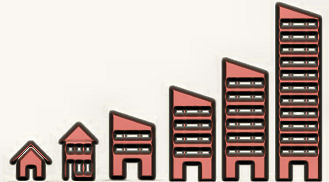 As previously, there was the muffled threat that this new version of suburban planning, which can only increase occupier density in a municipality with the highest or second highest density in greater Melbourne, was driven by State Government (of a different stripe, but the threat remained the same), and the heavy implication that it might be worse if we did not agree.

There was much volatile discussion around the apparently arbitrary re-drawing of new boundaries---there must always be unfortunate residents who end up next to or surrounded by, possible huge overshadowing apartment blocks whereas across the road it is different.

The Planning guy ( who seemed rather embarrassed; I felt a bit sorry for him) admitted the historically, and also recent, appalling standard of erections in Moreland and also said the Council wished to enforce more stringent standards of good design and superior build quality, but again admitted on questioning that these would also be discretionary.

Others raised the issue of the effect of massive 1-2 bedroom blocks on the current family demographic of this pocket of Moreland. And obviously the failure to account for parallel improvement in infrastructure, most notably public transport but also water, sewage etc. was acknowledged but this point was avoided because all this was a matter for the State and not the Council. Likewise the effect on rates was avoided.

Others had direct stories of fighting developers, achieving modifications on paper which were ignored in concrete, and achieving no redress because what standards there were could be flouted. The stress and anxiety caused by these fights at council and VCAT levels, and the necessity for constant vigilance, were raised quite emotionally by a couple of unfortunates.

An interesting but telling tiny detail was that there were a number of booths set up in Estonian House with Council brochures (the ones with the ridiculously scaled artist's impression illustrating the wide and gracious Boulevarde de Melville). Some residents (who had after all paid for the rent of the hall) also placed sheafs of counter-suggestions and blanks for letters of objection to the proposals in these booths. These disappeared immediately, some were replenished and again they vanished within a minute or two. The presumption is they were taken by council staff who were roving around at all times.

Another interesting detail was that, as far as was visible, we were not graced by the presence of a single councillor.

Try this if you are having problems posting comments

Problems have been reported by people attempting to save comments. But, if you go to the bottom of the article that you are posting a comment under, you will find the save button; just keep travelling south.