Johnny and Joanie were once the typical post-apocalyptic Stone Age couple. Each day was a tribulation. Minding the kids, fending off predators and raiders from adjacent tribes, hell, just putting food on the table were stressful enough. The versatile Tim Murray reaches out to new-agers everywhere in this article about personal adjustment in a time of advanced oil-depletion.

Having marital difficulties?
Has the mindless pursuit of game and sustenance got you down?
Has the quest for more and more left you spiritually empty as the environment degrades around you?

Then you need to attend the Barney Rubble School of Sustainable Happiness (BRSSH)!

Johnny and Joanie were once the typical post-apocalyptic Stone Age couple. Each day was a tribulation. Minding the kids, fending off predators and raiders from adjacent tribes, hell, just putting food on the table were stressful enough. But worse was that feeling of spiritual vacuity that comes with the subconscious understanding that one's life in this dog-eat-dog stone-age world is simply not fulfilling. Like all couples in our society, Johnny and Joanie knew in their hearts that they were not happy, but they just couldn't put their finger on the reason. Some said it was "capitalism", some said it was the lack of renewable technology. But no answer seemed satisfactory. So naturally, they blamed each other. To Johnny, the reason that their marriage was falling apart was that Joanie was not "putting out". But for Joanie, it was always "our relationship". Johnny just never seemed to want to find the time to talk about, although, in his eyes it seemed that was ALL Joanie ever wanted to talk about.

At first they considered marriage counselling, but the shaman next door seemed like the very last person who you would want to confide in. The guy seemed like he lived a dream world. Always in delirium, going off in the wild for days of fasting, always seeking some hunger-induced vision, celibate, living alone----what the hell did he know about family dynamics?

Then they heard about “THE BARNEY RUBBLE SCHOOL OF SUSTAINABLE HAPPINESS”, and the workshops held by Mark Anielski. It seemed like an option that they couldn't pass up. So they enrolled, and boy were they glad they did! Now they live in connubial bliss as spiritual beings who just happen to live in material world----in it, but not “of” it. Who needs a GDP anyway? 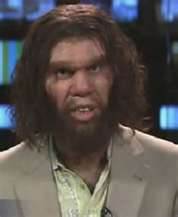 Johnny (to the left), a hunter-gatherer in what used to be Wisconsin (a member of the “Walker” kinship group) testifies as to how the Barney Rubble School of Sustainable Happiness changed his outlook on life.

"I use to measure my happiness on the basis of how many dead carcasses I could bring home each week to the family, or how many skulls I could crack in encounter with a rival tribe, but thanks to the BRSSH, I now know that what is most important in life is to live at a subsistence level and come to enjoy it, knowing that in so doing, I am reducing my footprint so that the hunter gatherers of other tribes have enough to sustain themselves too...voluntary simplicity is what it’s all about, man. You gotta embrace destitution and grab what life doesn’t offer while you can. Ask any self-righteous green: pointless self-sacrifice gives you a big-time dopamine hit---trust me! It’s not about results, it’s about feeling good about yourself.” 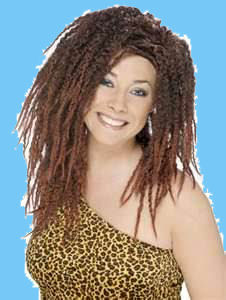 Until she enrolled at BRSSH, Joanie (to the right) thought she could only be happy if she was grabbed by the hair and hauled away by a knuckle-dragger who would "bring home the bacon" and allow her to raise a big family in a big cave or hovel befitting her elevated status.

"Maybe it was just the time I was brought up in. As a stone age girl I was expected to fulfill the tribal dream. I was raised to believe that to be happy, I needed a brave man, I needed a caveman. After all, every red-blooded female hunter-gatherer wants someone she can always look up to. Someone who loves her of course, by letting her know that he's the boss. So before attending the Barney Rubble School of Sustainable Happiness, I wanted Johnny to get angry. I wanted Johnny to get mad. I wanted him to give me the biggest lecture I ever had."

But after graduation, she is brimming with sustainable happiness knowing that she her modest lifestyle is permitting other hunter-gatherers the ecological room they need to expand to push the limits and persist in equally miserable circumstances. "As the saying goes", Joanie explained, "if you can't change your situation---in my case, the situation of a living in a post-apocalyptic dead-end world that lacks the non-renewable resources to re-launch civilization---then change your attitude!"

"Before I went to the BRSSH I thought that suckling my kid while I was gathering berries and wood bugs for dinner, and wearing big necklaces of fake sabre tooth tiger teeth was the ticket to self-esteem and contentment. Now I realize that I can gain the same satisfaction by meditation and deep breathing exercises.....and I can do this without taxing the resources that future generations of no-hopers will depend on....people whom we must rely upon to carry the torch for a species that will never again create civilization or accomplish anything of significance....It is this vision of the future which gives me purpose in life."

Leaves us all speechless

but not "laughless" . It's good to hear that all is well now in the town of Bedrock and let it be an example for all of us.