The joke is on you, you green fool! You and your idiot faith without evidence! Your techno-optimism and cornucopian denial! Renewable technology? What a laugh! Who did you think you were kidding? Mr. Jevons? What a paradox! Smart growth? Ha! What's next, "Smart" cancer? "Smart" extinction? "Smart" deforestation? 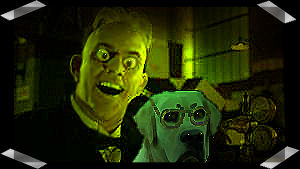 The joke is on you, you green fool! You and your idiot faith without evidence! Your techno-optimism and cornucopian denial!
Renewable technology? What a laugh! Who did you think you were kidding? Mr. Jevons? What a paradox! Smart growth? Ha! What's next, "Smart" cancer? "Smart" extinction? "Smart" deforestation? Oh and "Sustainable" Growth! I love that one, and I laughed even harder at Sustainable "Development"! Nice try. As Garrett Hardin said, we got a moratorium on thinking with that one! Mr. Greenwash you really have a sense of humour---too bad your euphemisms didn't fool Mother Nature! But I must at admit you sure put one over on the Sierra Club membership! You even had them believing that we could "de-couple" economic and population growth from environmental degradation! Those comedians from the Canadian Centre for Policy Alternatives, the Eco-Socialists, what a piece of work they are! And then there is the Queen of Smear from Hampshire College! Good work on character assassination babe! You, Morris Sleaze and the Center for New Community make a great team shutting down debate about crucial environmental concerns !

Were goin' down folks! It's Good Night Gracie! Another failed evolutionary experiment for the fossil record! Ha ha! 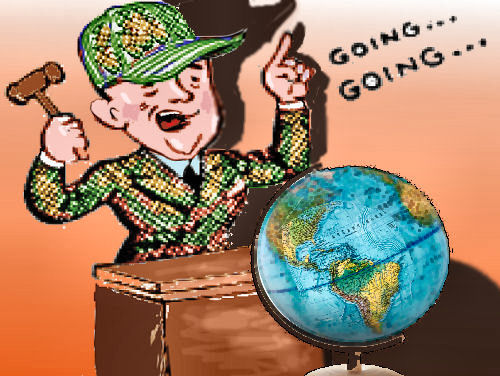 Ladies and Gentle....men! Welcome to the Doomsday Auction. What we have here tonight is Human Catastrophe offered to you at an incredible price. This is a once-in-a-life time opportunity to make a claim on that disaster which will end civilization as we know it. You have been brought here by special invitation. All of you here are prominent and credible threats to humankind, but your challenge tonight is stake a claim to catastrophe by producing evidence that you have the largest constituency of public opinion behind you. That is, the more people who take you seriously, the more attention you deserve. And if you command the most attention then you, and you alone, can take home the prize of being Boogeyman Number One, The Top Dog of Human Catastrophe!

First, let me introduce viewers to the contestants. We have, in no particular order, Nuclear Accident, Terrorist Attack, Global War, Cyber War, Global Warming, Economic Collapse, Fuel Shortage, Oil Spill, Industrial Accident, and Famine. Sorry, but even though we now have over 7 billion people, "Overpopulation" was not invited to this auction because mainstream environmental organizations refused to size its nomination papers in deference to their corporate donors and political correctness, and the eco-socialists claimed that he was a rich racist who was trying to blame the global poor for his own excesses. "Natural Non-Renewable Resource Shortages" are not here either because Peak Oilers protested that it was all about energy and that the shortage of minerals and metals vital to an industrial economy were not deserving of a voice---a view seconded by PC book publishers who won't print any manuscripts from Chris Clugston.

OK, lets get rolling. Let’s start the bidding at 5%. Who will offer 5% of public opinion to back their claim to fame as a credible and lethal threat to civilization and life as we know it?

Well Ladies and Gentlemen I guess you could have seen it coming. Economic collapse is keeping us awake at night. That wolf at your door has certainly got your attention hasn’t it? Greens have tried to take your eye off the ball with global warming but who the (expletive) cares about another metre or two of rising sea water in 60 years when you will be on the bread line tomorrow, and you will have give away your kids to an orphanage!

If that is not worry enough for you, come back next week and maybe, just maybe, Overpopulation, Peak Everything, Depleting Aquifers, The Collapse of Biodiversity Services and Critical Metal and Mineral Shortages will show up! That's if tensions in the Gulf don't trigger a nuclear exchange!

Have a safe journey home now---- that's if it hasn't been foreclosed on you! As the saying goes, if the bailiff doesn't get you the Grim Reaper will! Now go back to sleep and have an American dream!

Thanks to Emily Spence for bringing this survey and article to my attention through
http://www.ecohealthalliance.org/sup/downloads/EcoHealth%20Alliance%20Survey.pdf

Australia being auctioned off as an Asian nation

Australia's doomsday auction is the selling off of Australian brands, infrastructure, housing, manufacturing and farmland to overseas buyers. It in acknowledgement that Australia has little future as a nation and is to be absorbed into the Asian economy. Australia has already made plain its hope to see a greater US engagement in the ''Asian century'' as the Obama administration withdraws from Iraq and Afghanistan. The decline of American influence and the rise of the Asian century seem to have become true. Asia however still strives to have the lifestyle and paraphernalia of the United States, probably a retro concept anyway with their rising debt and poverty. The shift in the world's economic and strategic weight to Asia has prompted the Australian government to commission a White Paper on 'Australia in the Asian Century'. Australia's Trade Minister, Craig Emerson, says the White Paper will drive debate and public policy over the next 10 to 15 years and provide a basis for high-skill, high-wage jobs and "greater prosperity for all". Just how much input will the public have in these debates? Little, no doubt. He actually means greater prosperity for big corporations and trading partners, not the public. Asian economies last year purchased almost two-thirds of our exports, worth $175 billion. In fact, all the growth in our exports over the past five years has been due to growth in demand from Asia, led by China. Similarly, foreign direct investment coming to Australia from Asia has doubled over the past five years http://www.smh.com.au/business/chasing-the-fast-boat-to-asia-20111219-1p2dc.html Development activity in Australia involving foreign companies has reached levels not seen in more than two decades. Foreign investors have spent a record $12 billion buying up Australian farmland and agricultural businesses over the past year, but have put off investing a further $14 billion until the outcome of a Senate inquiry in March 2012, a new report by Ferrier Hodgson says. The nation's sugar industry has recently been targeted by the Chinese and offshore investors have also sunk massive sums into Australia's meat processing and wheat sectors. Some of the country's best farms are also being snapped up by overseas investors who mask their identity with complex corporate structures. We are being swallowed by foreign interests, and the evils of globalization are wreaking havoc on Australia, due to our permeable borders and low-level sovereignty. The global auctioning off of Australia's natural and man-made assets are threatening the future of Australia as a nation. It's a fire-sell off in recognition that as the driest continent, declining food production and rising population, we cannot survive climate change, global economic predators, and provide adequate security, so we must be sold off as an Asian nation.