This article comments on the Australian war propaganda that was used in a recent episode, involving Jaqui Lambi, of "Go back to where you came from" on SBS. It responds to a recent article (republished here) by Vanessa Beeley about very recent massacres conducted by IS, close to a US Army base, which has allowed IS convoys to pass through open desert, unhindered. On 2 October 2018, Mrs Thoraya Um Ammaar was executed on video by IS over two months after she and about 25 other women and children were kidnapped from the Sweida countryside, south of Damascus on July 25th 2018. US Coalition forces remain camped in Al Tanf, 330km to the East. It is simply intolerable that IS can occupy that part of Syrian territory while aggressively threatening anyone who comes near it.
Report by Vanessa Beeley

What makes me particularly angry about this, and the killing of the hostage on October 2nd, is that this week in Australia there has been a huge fuss about a live TV program called “Go Back to Where you Came From” – where numbers of celebrities have gone to “some of the most dangerous places in the world” to see what it feels like for refugees (those ones who try to escape to Australia) https://www.theage.com.au/entertainment/tv-and-radio/jacqui-lambie-and-sbs-crew-caught-in-isis-attack-in-syria-20181002-p5079s.html

So where in Syria do you think that two women, one a former anti-Muslim immigration independent Senator, – would be taken? Raqqa. And in an event which I begin to think was staged, two days before the program started, an “IS sleeper cell” started shooting in the area near to where the TV crew was, so they had to be evacuated to Kobane - in Syria!(just under the Turkish border).

This sleeper cell purportedly raised the IS flag from a building not far from the centre of Raqqa, in mid afternoon. How likely is that, or even possible? https://www.bbc.co.uk/news/resources/idt-sh/raqqas_dirty_secret

At no point in the introduction – where we saw the identities being rushed under cover, was the fact that US soldiers were assisting them even thought worthy of mention!

And of course Lambie and Marina would have no idea that they are just as much victims in this god-awful propaganda war as the rest of us. It may make you a bit sick to read that Lambie ( who has a better side as down to earth, and once in the army) found it thrilling to be “on the front line” and “to feel how our troops must have felt”. Never mind that Australia doesn’t admit to having any troops in Syria, only Afghanistan.

I’ve long thought that Jackie Lambie would be moved to know that upwards of 85,000 regular Syrian soldiers have been killed by the terrorist invaders, defending their countrymen.

This program began as a series about five years ago, as apparently a genuine attempt to make prejudiced Australians aware of just what refugees were going through. But now it seems that this message is not so important, while it is used to put the case for the US coalition staying in Syria because otherwise “IS could come back”. The threat of Islamist terrorism is constantly beaten up here in OZ, to suit the agenda of the powers that be; the threat that they present, along with their US and UK allies, is infinitely greater.

The hypocrisy is enough to make you go mad I think.

I will look at the pink hollyhocks that grow in front of our house with Syrians in mind now...

Over 2,600 corpses of civilians killed in the US air raids and victims of the ISIL terrorist group have been found in Raqqa province so far, local sources said.

The sources in Raqqa reported on Wednesday that 9 more bodies of civilians killed in the US-led coalition attacks were found in al-Jamili district in Raqqa city on Tuesday. 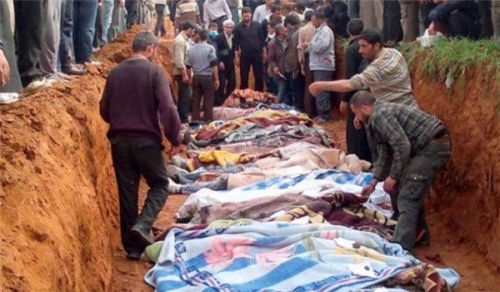 Meantime, the Kurdish-language Hawar news quoted an official source in Raqqa civil council team as saying that the corpses of over 2,600 people, mostly women and children, have been unearthed in al-Rashid stadium, the city zoo, al-Qadim great mosque and al-Badou district since the liberation of Raqqa last October who were mostly buried by the ISIL in mass-graves.

The bodies of civilians killed in the US airstrikes and the ISIL assaults are every day discovered in mass-graves and under the ruins of buildings in different parts of Raqqa.

Last Sunday, a sum of 13 bodies of civilians killed in the US-led coalition’s airstrikes on Raqqa city were found.

In the meantime, three more bodies were found in the yard of al-Atiq mosque and six more were unearthed from the debris of ruined buildings in al-Badou neighborhood in Raqqa city.

Four wounded Syrians who survived the bombardment of Deir ez-Zor by Aust­ralian, US, British and Danish aircraft on 17 Sep 2016. Sixty-two of their com­patriots perished that day. Whether they intended to bomb the Syrian Army, or ISIS as they claimed, any aerial attack on the territory of a sovereign country like Syria, without the consent of its government, is a violation of international law. 1

Following a two-month investigation into the US coalition attack on a Syrian Army base in Deir al Zour in September, the Defence departments of the US and Australia concluded that the 'botched' strike was a result of poor information and human error, and no-one will face charges over the 'incident'.

"Although the identity of those killed or wounded could not be substantiated, the investigation found it was more likely than not that those struck were irregular forces aligned to the Syrian government.

"The situation on the ground in Syria is complex and dynamic. In many ways these forces looked and acted like Da'esh fighters the coalition has been targeting for the last two years. They were not wearing recognisable military uniforms, or displaying identifying flags or markings." 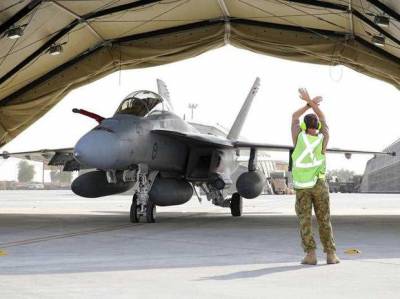 This conspicuously 'false news' from such a well-briefed source is deeply worrying, particularly as its release coincided with the Syrian Army's 'hour of glory' as it liberates Aleppo's trapped civilians from the four-year long insurgent siege.

Despite the lengthy 'investigation', carried out by the very same people who ordered and executed the murderous attack on the Syrian soldiers defending Deir al Zour from IS, the report's conclusions only confirm the false statements made to the press at the time, though embroidering them with an elaborate cover story. For the hundreds of Syrian victims of this dastardly attack and their families, any confidence in the statements and behaviour of their foreign attackers is now permanently destroyed.

How galling for those families, whose heroic husbands, sons and brothers had held their ground for two years against constant assaults from IS insurgents, to read that 'their identities could not be substantiated'. Or that these members of the Syrian Arab Army's 123rd Republican guard were mere 'irregulars aligned to the Syrian government'.

Never mind the testimony of some of the injured soldiers from hospital broadcast on Syrian state TV, describing the aggression and persistence of their attackers, or their still more incriminating statements that IS fighters moved in to take over the base before their comrades blood was even dry.

Although the US coalition's story is a complete travesty, it deserves closer scrutiny both for what it says and what it leaves out.

While novel unsubstantiated and false allegations are made about the nature of the target, the Australian Defence Forces have admitted responsibility for likely causing some of the deaths of Syrian soldiers - claiming that Australian war-planes had launched six laser-guided missiles, at what they identified as Da'esh fighters.

Since Australia 'joined the US coalition against Da'esh' two years ago, training soldiers in the Iraqi army, Australia's position on the fight against Da'esh in Syria has been obscure, and air-strikes within Syria notionally limited to preventing Da'esh from threatening Iraq. The silence of the Australian government, and the failure of the national broadcaster the ABC to ask questions about our actions against terrorist groups in Syria, contrasts sharply with the rhetoric from both sides of government here for the last five years, both against terrorism and against the Syrian government.

Not only has Australia been a central member of the 'Friends of Syria' group, and a vocal supporter of the Syrian external Opposition, but its anti-Russian and anti-Putin statements and actions have made it one of the most important partners in the NATO war on Syria. Some of that anti-Russian rhetoric is connected with Australia's support for Kiev's post-coup government, and reaction to the deaths of 38 Australians on board MH17. A recent agreement to supply Uranium to Ukraine hardly bodes for our future dealings with Moscow.

In the absence of any sensible discussion or analysis in the Australian media about the Deir al Zour attack and its actual consequences, or how the change in US leadership and likely direction in Syria could affect Australia's strategic position and military involvements in the region, some further investigation is now called for.

In the meantime, and as has happened repeatedly during the Syrian conflict, a resolution of that conflict in one area sees a resumption of it elsewhere. This 'two-steps forward, one back' - or three back - progress of the war is largely why it has taken the Syrian Army and its allies over two years to liberate Aleppo from its insurgent grip.

Of particular interest to those seeking to understand the objectives and allegiances of Syria's foreign invaders and their 'puppet-masters', is a surprising and disturbing development - the reappearance of IS forces in Palmyra.

Palmyra, like Deir al Zour, was stoically defended by the Syrian army until IS forces moved in, controversially crossing hundreds of kilometres of open desert without being noticed by the 'US coalition against IS'. (perhaps they were mistaken for Syrian troops?) In one of Russia's first acts demonstrating that it was serious about fighting and killing terrorist forces in Syria, Russian airpower helped the Syrian Army liberate the historic city and adjacent town of Tadmor ten months later.

But in a situation which is almost a mirror image of that existing today, terrorist groups including IS south of Aleppo took advantage of the Syrian Army's focus on Palmyra to seize control over the main highway linking Aleppo with Damascus, cutting off the Syrian Army contingent protecting Western Aleppo from the insurgents in the East.

As Oscar Wilde said: "to lose one parent may be regarded as misfortune; to lose both looks like carelessness."

To strike the Syrian Army while targeting IS may be a 'blunder'; to fail to target IS as it again targets the Syrian Army looks like more than carelessness, and a lot like collusion. And we should ask, why did the US coalition forces not immediately return to kill those Da'esh fighters who moved into the Deir al Zour base that they had just inadvertently 'liberated' of its patriotic Syrian forces in September?

Vice Admiral David Johnston didn't answer that question - but neither was he asked it.

As a virtual postscript, and indication that things are really changing on the ground in Syria even while they remain stagnant in the minds of her foreign 'false friends', it appears that Palmyra has already be re-liberated, with many IS fighters killed in a joint Russian-Syrian operation.

And so we won't be subjected to another call to 'intervene to protect Syria's ancient heritage - from IS terrorists'.

#deirEzZorFn1" id="deirEzZorFn1">1. #deirEzZorFnTxt1">↑The images are from the abovementioned Reports: Audio recording between ISIS and US before Deir Ezzor massacre found
(26/9/16) by Ron Paul | Ron Paul Forums.