Greens Councillors Amanda Stone, Sam Gaylard and Misha Coleman voted together with Councillors Stephen Jolly and Jackie Fristacky to give the go ahead to run a cycle path through a natural reserve. Trees will be felled. This was not a foregone result, since the decision was carried only by one in a 5:4 vote. The Greens obviously had a choice, but seem to have chosen to put transport ahead of nature in a very overcrowded area with little access to natural surroundings. This lack of interest in protecting the natural world and our access to it from overdevelopment seems to be an increasing feature of the Greens, particularly to the North of the Yarra.

Julianne Bell reports on this matter in a letter to Protectors of Public Land and includes the submission made by PPLVic to the council, which has been published with small adaptations, below. The pictures of the trees that will go were also provided by Ms Bell. (Intro to this article by Editor: candobetter.net) 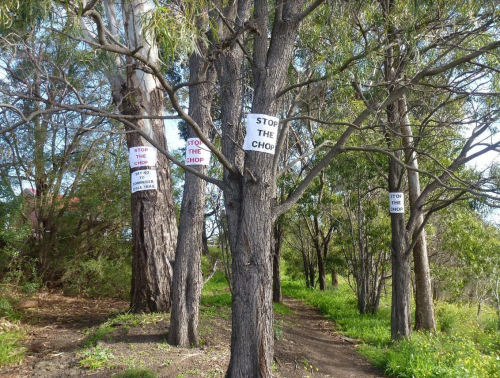 At a meeting on Tuesday last 2 August 2016 Yarra Council considered the cycle path project proposed to be constructed through Rushall Reserve and along the escarpment next to the railway line. Debate on this controversial project, opposed by many from the North Fitzroy community plus parks and community groups such as PPL VIC, was reported to have raged until around 1 am the next morning.

To their eternal shame Greens Councillors Amanda Stone, Sam Gaylard and Misha Coleman voted together with Councillors Stephen Jolly and Jackie Fristacky to give the go ahead to this project. The vote by Councillors was 5 in favour 4 against. (Councillors Roberto Colanzi, Simon Huggins, Geoff Barbour and Phillip Vlahogiannis voted against approval of the project.)

Construction of this project will spell destruction of the Reserve as it will alienate about half the parkland and necessitate clearfelling of trees - 38 have been identified not just the 12 cited by staff. These are said to be the habitat of the critically endangered Swift Parrot. (See attached photos of trees on the escarpment along the existing goat track including the large River Red Gum which Council staff consider "might be able to be saved".) Apart from Boroondara, Yarra has less parkland per capita of any municipality in Melbourne so can ill afford to lose more.

Also of great concern is the impact of the cycle path of the Batman-Woiwurrung Treaty Signing Site on the Merri Creek.

Consultants report they cannot find aboriginal artifacts (surprise!surprise!). This was the only known treaty signed in Australia between white settlers and the Aboriginal population. It is extraordinary that the City of Yarra has never moved to establish the site as one of national significance.

See below the submission made by Fiona Bell for PPL VIC at the Council meeting. (Same surname as mine but not related.) Note our campaign opposing the commuter cycle path through Rushall Reserve continues as does our advocacy for heritage protection for the Batman-Woiwurrung Treaty Signing Site on the Merri Creek.

I am making a submission on the "Shared Bike Path'' through Rushall Reserve (referred to as "the project") on behalf of Protectors of Public Lands Victoria Inc., a coalition of 80 groups dedicated to protecting and maintaining sites of environmental and heritage significance. I am qualified additionally to speak on the subject as I am a resident/ratepayer of the City of Yarra, a member of the City of Yarra Heritage Advisory Committee and a cyclist. Julianne Bell Secretary of PPL VIC sends her apologies for this evening.
I wish to make the following points.

I believe that NO cycle path should go through the Rushall Reserve, which is presently a cul de sac reserve surrounded by cycle paths.

The Council officers' report has established that there is a significant recent addition to the project plan not revealed before to the community. I quote from the report under "Feedback of Path Design" section. "It is highlighted that further recent feedback from asset owners, in particular City West Water in May 2016, means that any path adjacent to the rail embankment in the reserve (at one particular point) need to be located a further 2.5 m to 3.0 m further east (i.e.into the reserve) than is shown on the plan in Table 3 below. This is further outlined in paragraphs 30 to 36 below.)”

In view of this significant change to the design to the plan for the project, and the fact that the cycle path will intrude further east into the Reserve taking over more precious parkland, PPL VIC is advocating council defer any decision concerning the project in order for the community to digest the changes.

We are of the view that the project should be deferred for hearing at a future Council meeting.

Should Council be so ill advised as to proceed to consider the project tonight and make a decision, here are our arguments opposing the project. These have been raised before in our submissions:

1. There has been no assessment of the value to the community in terms of a recreation facility, only the profit to cyclists.
2. There has been no assessment of the environmental impact with clearance of native vegetation and the heat island effect of asphalting over parkland (should this proceed).
3. No consideration has been given to the fact that the Reserve including the Heritage Zone on the escarpment is the habitat of the critically endangered Swift Parrot, Lathamus discolor. A major factor for the demise of this bird is reduction of vegetation, especially eucalypts, as it is primarily a nectar feeder.
4. The cycle path is billed as a recreational cycle path but there is a network of nearby cycle paths which serve North Fitzroy residents. It is clearly a commuter cycle path and will serve residents of municipalities across Melbourne not only locals. To quote Justin Hanrahan of Council staff at a recent meeting on 16 June 2016 with PPL VIC that that a major purpose of the project is "to shave off a little travel time for bike users on the trail." It seems clear, therefore, that the proposed cycle path should be categorised as a commuter cycle path. It is designed to save commuter cyclists time in transit, although this would be only a very few minutes.
5. There is no data collection of likely users and of users of existing trails to justify the extraordinary proposed expenditure of $600,000.
6. The Cultural Heritage Management Plan is unsatisfactory. There is no real acknowledgement that the Batman Woiwurrung Treaty Signing Site is the only site in Australia where white settlers signed a treaty with the native population. The whole of Rushall Reserve and Merri Creek within the Reserve should be declared a national heritage zone not a transit route.