EveryAGE Counts: Seven in ten older Australians believe 'ageism against older people is a serious problem,’ but those in their 50s and 60s are significantly more likely to hold this view than those in their 80s and 90s, according to landmark new national polling commissioned for the nation's second Ageism Awareness Day today (Oct 7).

The research also finds a strong majority of older Australians want the government to invest in a national awareness campaign about ageism and its effects.

Dick Smith commissioned a Galaxy poll to assess both the impact of his $1 million TV ad campaign based on the Grim Reaper AIDS ad of the 1980s, and community attitudes towards Australia’s developed-world-leading immigration-fueled rapid population growth. The sample comprised 1,005 respondents, distributed throughout Australia including both capital city and non-capital city areas – the report is attached. The main findings of the poll were:

Dicks Smith said “This just confirms that what I’ve found from the conversations I’ve had with ordinary Australians: 8/10 are concerned that the major political parties have no population plan.” Dick Smith said “Aussie families can have up to 20 kids during their lifetime, but none do. This is because parents have a population plan for the number of children they can give a decent life to. Yet our politicians have no similar plan for our country. It’s time for a population plan that involves stabilising Australia’s population below 30 million by reducing the net overseas migration program down from the current 200,000 back to the long-term average of 70,000 per annum.”

Is Dick Smith the last good rich man in Australia?

Or will some other wealthy people come out in support of democracy too? It is admirable that Dick Smith really seems to be on a truth-seeking mission. He has refused to be put down by the ABC propaganda dogs at The Drum and Media Watch and he has financed a proper survey which has shown his support base is very high. His detractors have greatly underestimated him. Is Dick Smith the last good rich man in Australia, a country run by wealthy men and women politicians, CEOs, property developers, transnational corporations and media owners, entirely for their own enrichment, at great cost to the rest of us.

National Party member for the Victorian seat of Lowan Emma Kealy has called on the state government to extend a kangaroo culling trial to West Wimmera Shire.

The government introduced a two-year trial to cull kangaroos for pet food in 2014.

Ms Kealy wants to see the program introduced permanently or the trial extended to include West Wimmera Shire. “It’s created 12 jobs at the Hamilton abattoirs, where they are processing the meat for pet food,” she said.

This article was first published by the Australian Wildlife Protection Council. 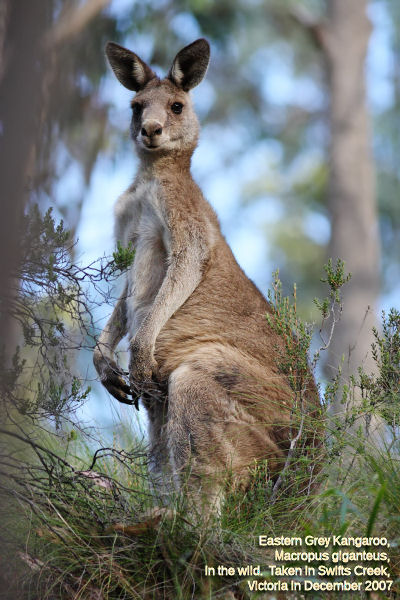 Ms Kealy wants to make it permanently open season.  “Culling” should be for old, or sick, animals.  This would not be a “cull”, but be a slaughter.  It would be all out war against our Australian animal icon.

The trial had only occurred in areas where kangaroos were in plague proportions.   Since the start of these trials the number of permits has increased dramatically, from 30,000 per year, to 70,000 and now 100,000, probably in an effort to justify the slaughter.

Ms Kealy said while there were environmental concerns about the issue, the trial had only occurred in areas where kangaroos were [purportedly] in "plague proportions".

To soften her killing plans, Ms Kealy said shooters were trained to kill kangaroos with a single shot to the head to make the process as humane as possible.  That’s almost impossible, due to the size of the head, and the accuracy needed!

…kKangaroos are not in plague proportions but their populations are self-regulating. They are not “the environment” to be “managed” but native, sentient beings who have the right to live in their native homeland. It is humans who are spreading into the habitats of native species.  Australia has the worst record in the world when it comes to species extinctions and it is the result of genocide against indigenous peoples. Since I did not wish to be part of such a country, having emigrated to Victoria, Australia with my parents in 1970, I returned to my country of origin, Croatia, in 1992 and encourage others to do the same. I never saw a kangaroo in the wild even though I travelled a lot and did some farm work, picking potatoes and peas.

#linkToPoll"> POLL: Should kangaroos be culled in the Wimmera for pet food?