Children's March for the Animals

Led by Rod Quantock and organised by Moreland Community Against the Tollway, the Children's March for the Animals drew a concerned crowd despite the pouring rain, to raise awareness of the serious threat the East-West tollway poses to the Melbourne Zoo. It is proposed to be built at around 40 metres from the zoo wall (pictured below the video).

Of course, ongoing thanks and support are in order as well for the herculean efforts of Ms Julianne Bell, founder of Protectors of Public Lands Victoria and Royal Park Protection Group, to save the Park and the Zoo, notably her almost single-handed mounting of and daily attendance at the current monumental and very expensive legal battle in this effort. (Direct deposit of donations can be made to Protectors of Public Lands Victoria Inc. at MECU BSB 313 140 Account No 23145714. or to the "Royal Park Protection Fighting Fund": MECU: BSB 313 140 Account no. 23145824. (Ring MECU for any queries on 132888) )

Animals need their sleep and not to be subjected to more unnatural noise! Habitat is shrinking throughout the world and we owe those exotic animals we have bred and kept in captivity this respect. 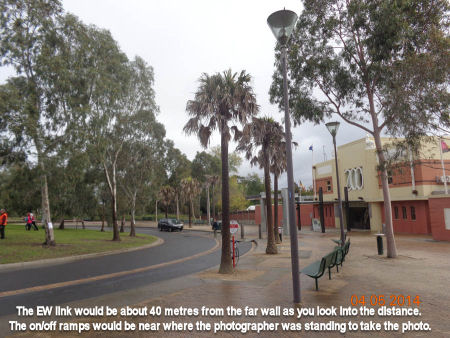 Speaker, Michael Petit, in the video calls on Melbourne Zoo to do their own study of projected noise levels and not to passively rely on what they are fed in terms of information by the people in charge of the EastWest Link project.

At the ceremony at the Zoo a petition was delivered to Ms Jenny Gray, CEO of Zoos Victoria. Rod Quantok read out the message of support of the 22 community organisations who had advised Protectors of Public Lands VIC that they oppose the East West Link and its impact on the Melbourne Zoo. A message from Dr Marc Bekoff, Professor Emeritus of Ecology and Evolutionary Biology of Colorado University in the USA and co-author with the famous Dr Jane Goodall of books on children and animals, along the same lines was also read out. PPL VIC and MCAT will be writing to Ms Gray and to the Premier with our combined message plus the names of supporting groups.

Why is Tony Abbott prepared to fund this monstrosity against the people's objections?

Candobetter notes that Australian Prime Minister, Tony Abbott, is insisting that his government will provide billions to build this unnecessary, almost useless, and hated toll-way. This willingness to fling taxpayers money at the unwanted EastWest Link whilst he is preparing Australians for barbaric cuts in health and welfare is an insult to citizens. What can the reason be except to transfer our remaining wealth to the developers, who are making our lives hell.