Dr Marcus Papadopoulos was interviewed by BBC News about 'russophobia' in Britain and policy in Syria . Speaking very clearly, Papadopoulos gives a history of British resentment of Russia, dating from the Crimea and thinks that Britain is acting in part out of a feeling of being left-out in the region. Islamist terrorists in Aleppo and elsewhere in Syria are the only ones benefiting from this British ignorance and bias. It should be remembered that those Islamic terrorists that the west is backing, pose a huge threat to the people of Britain. The US-led coalition in Syria is not acting legally.

"Nulandistan" is the title of Crosstalk's most recent interview program on current politics in Ukraine, which we link to here. The name Nulandistan, of course plays on the name of Victoria Nuland, US Assistant Secretary of State for European and Eurasian Affairs and her encouragement of the Kiev junta.[1]

Crosstalk interviews a panel of political scientists, Vladimir Suchan, Marcus Papadopoulos and Patrick Henningsen about what on earth a US led NATO thinks it is doing in Ukraine, why it is ignoring Putin's peace offerings, and how dangerous things are getting here. Rivetting and enlightening show. Video inside. 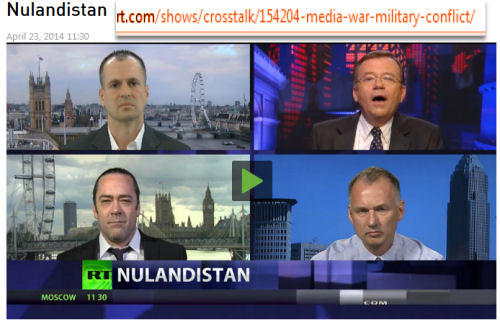 "Russia has begun extensive military exercises on its Ukrainian border following the escalation of violence in eastern Ukraine.

“The order to use force against civilians has already been given, and if this military machine is not stopped, the amount of casualties will only grow,” Russian Defense Minister Sergey Shoigu said during an official meeting in Moscow.

“We are forced to react to the situation.”

Shoigu said that the drills involve march and deployment exercises by forces in the southern and western military districts, and separate Air Force maneuvers. "

[1] Nuland handed out chocolate chip cookies to protesters on the Independence Square in Kieve on December 10, 2013. Adding to her reputation for arrogance and duplicity is a leaked recording of a conversation between Nuland and the US ambassador to Ukraine, Geoffrey Pyatt, Nuland says, "Fuck the EU.