Every year there is an international survey, called the Edelman “Trust Barometer” carried out in 28 countries to measure the level of trust its citizens hold with institutions such as Governments, media, business, and NGO's. Australia, for the second year in a row along with Singapore were the only countries that recorded an overall drop in trust in all categories. Across all 28 countries an average of 42% of people thought their government was the most broken institute but in Australia the figure was 56%.

A law passed in a Joint Resolution by the 84th Congress and approved by President Dwight Eisenhower in 1956, declared "In God We Trust" must appear on American currency.

Apparently this trust does not extend to mere mortals. Every year there is an international survey, called the Edelman “Trust Barometer” carried out in 28 countries to measure the level of trust its citizens hold with institutions such as Governments, media, business, and NGO's. Australia, for the second year in a row along with Singapore were the only countries that recorded an overall drop in trust in all categories. Across all 28 countries an average of 42% of people thought their government was the most broken institute but in Australia the figure was 56%. This was just 4 percentage points ahead of the lowest rated country, Russia where elections are rigged and opponents jailed or worse. Perhaps this last figure has a lot to do with our expectations, we are after all relying on governments to protect us from the ravages of banks, miners, developers and assorted tycoons. Interestingly China has the greatest level in trust, possibly because of the very public crack down on corruption currently underway by the nations leader Xi JinPing.

It would be difficult to find a complete answer as to why our trust in governments have collapsed so dramatically but one aspect is obvious, both major parties have such an obsession with monetary economics that human welfare is often sidelined or even ignored by the demands for GDP growth. Treasurers continually boast about our 25 years of continuous economic growth and seemed surprised when the population is unimpressed even though they are well aware that GDP “measures everything but tells us nothing”.

One example of this comes from Francis Sullivan who is the Catholic Churches representative at the Royal Commission into child abuse. He is neither an apologists or a defender of the church but he recently went public lamenting the lack of willingness of politicians to pursue the recommendations of the royal commission or even the bill on a national redress scheme they belatedly tabled in October last year. Perhaps tellingly Sullivan suggests that child abuse is not considered sufficiently important by politicians who only only respond to what he called “dynamic political narrative.”

Perhaps so, but this claim could also be made by victims of the HIV, asbestos related diseases and those afflicted by chemical contamination of their environment, all of whom languished in obscurity until public pressure forced governments to act. Even then James Hardie was allowed to relocate to Holland and thus avoid much of its financial responsibilities, the contamination from fire fighting chemicals sits firmly in the too hard basket and vehicle emissions in Australia remain far higher than other developed nations. There have been similar stories of governments failure to respond to issues including childhood poverty, the stolen generation, homelessness or even the obesity crises where the government rejected recommendations to put a tax on sugar. The indigenous disadvantage report is tabled every 2 years and joins others in the round basket including action on climate change even though the frightening effects are becoming painfully obvious to everyone but those in Canberra.

5000 Singaporeans demonstrated Feb 18, 2013 against mass migration blaming influx for infrastructure strains, record-high housing and transport costs and competition for jobs.  Government plans for even higher immigration have been greated with cynicism, distress and mass protest. Three video-links inside, two indie-media. 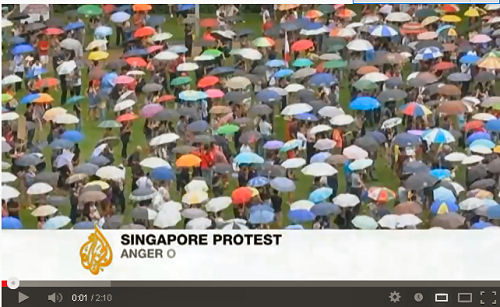 On Feburary 16 about 5000 Singaporeans grathered at the Speakers' Corner at Hong Lim Park to voice their anger at the government's announcement of a plan to raise the population with mass immigration.  The government excuse was, shamefully and predictably, 'the aging population'.

Like Australian governments, rather than face facts about inevitably rising energy costs and the need for stable populations and less production to adjust to these limits, power elites wherever they can get away with  it, try to make the public pay to keep them in the style of opulence to which they have become accustomed.

Protesters said how they had paid their taxes and worked hard, and that Singapore should be for Singaporeans. "We were not given anything for free here," said one woman.

Reading between the lines, one can see that their fear is that competition for housing and jobs will raise rents and lower wages.

Singaporeans rarely protest because they fear that displeasing their government might see them without housing. The government owns almost all the housing in Singapore.  Since it is a dictatorship, that makes its tenants and citizens insecure.  It takes a lot of guts to protest in Singapore, so the situation must be pretty awful.  See, on dictatorship and penalties for poltical blogging:  http://singaporedissident.blogspot.com.au/2012/01/singapore-dictatorships-look-good-till.html  and http://exposingsingapore.wordpress.com/2013/02/ . It is also very hard to blog politically for citizens there due to government surveillance.  For this reason Candobetter.net would like to inform Singaporeans that we welcome and protect comments and articles from Singaporeans on this matter and any others that fit in with our philosophy of reform in democracy, environment, population, land use planning and energy policy

Singapore is a tiny island which for years has relied on a daily influx of  workers from Malaysia to supplement its workforce. Those workers have no rights of citizenship, nor residence. Each night the go home across the border.  Citizenship in Singapore means the right to housing, eduation, social services and work.  These conditions were extremely hard won.  British invasion disorganised and dispossessed and turned into laborers a stable self-supporting population of localised clans and tribes. After the British left, Singaporeans faced poverty and overpopulation.  Now, as they are getting some sense of stability, their government is trying to pull the British recolonisation trick. That's the one we deal with in Australia, where self-government is never a real possibility, since the corporates pull the strings in federal and state parliaments and state parliaments control local government.

The government has tried to quell anger by saying that only half the new  immigrants will be given citizenship, but that is hardly reassuring. 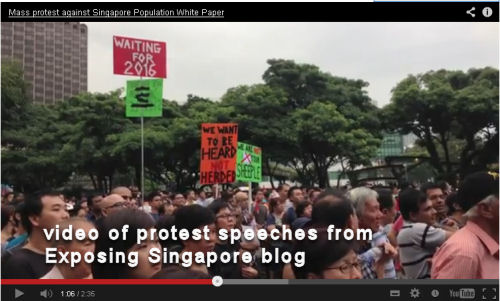 Ordinary Australians can sympathise with ordinary Singaporeans.  Singapore has very limited land, a population of about 3.3m (plus 2 million non-citizens) but a higher GDP than Australia, which has a population of 22 million. Australia also has limited land because, although it is a big continent, much of it is desert, lacks water, has high temperatures and cannot support much life.   Australia's manufacturing industry has degenerated in the past 50 years (due to government policy)  leaving it largely a commodity producer, relying on the export of minerals and agricultural product, and, more and more on the sale of citizenship via the backdoor through land-sales.  Recent changes to workers' rights and conditions leave Australian citizens unprotected against low-paid immigrant workers.  (See http://candobetter.net/?q=RightsAtWork).

Australia: Political disorganisation through mass immigration - an old colonial government trick
Australians have been greatly disorganised by mass immigration since the second world war, leaving the population in a condition where it cannot really organise politically. Although many Australians would probably like to have mass protests against high immigration, the society lacks the cohesiveness to do so.  Singaporians seem to have retained enough commonality with each other to be able to organise politically, despite the dictatorship nature of the government. Maybe that is what the government is really afraid of. It may be following Australia's recipe for political and disorganisation via mass immigration.

The place where the peoples' protest took place, Speakers' Corner, created only in 2000, was the first official location for democratic speech in Singapore.  No-one was expected to take it seriously.

“It’s a big red flag and they cannot go on with business as usual, with their old way of doing things of letting it blow over and letting emotions run their course,” said #0000ff" size="2">Terence Lee, who teaches politics at National University of Singapore. “This is not an emotional hump. I won’t be surprised if significant changes happen at the ballot box in 2016.”

The rally increases pressure on the government to slow an influx of immigrants that has been blamed for infrastructure strains, record-high housing and transport costs and competition for jobs. Singapore’s population has jumped by more than 1.1 million since mid-2004 to 5.3 million and may reach 6.9 million by 2030, based on the proposal. That stoked social tensions and public discontent that is weakening support for Lee’s People’s Action Party. [See: Shamim Adam, "Singapore Protest Exposes Voter Worries About Immigration," Feb 18, 2013, Bloomberg.com http://www.bloomberg.com/news/2013-02-16/singaporeans-protest-plan-to-increase-population-by-immigration.html] 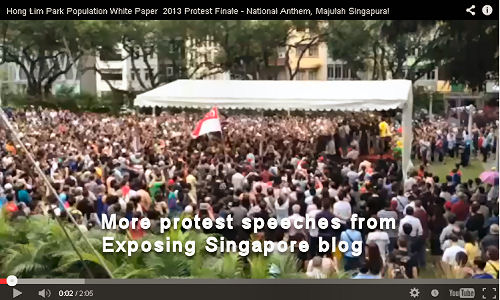 Singaporeans get on well with Australians and, ironically, many have migrated here to get away from the population pressure in Singapore.  Some Singaporean friends of Candobetter.net express surprise at how our governments seem to be inviting the same pressure here.  Our Federal government under the National Foreign Investment Review Board laws  has a special arrangement with Singapore to preference Singaporeans buying property here and State governments have done deals with the Singaporean dictatorship by giving public land away to Australand (more than 50% Singapore government owned) and permission to develop housing estates on it and resell to overseas buyers.  An example is the housing estate at Royal Park in Melbourne, about which there were many public protests.

Where Lee Kuan Yew tried to get educated women to have three children, the government is now trying to boost numbers with high immigration, as in Australia.

Singaporeans invited to send comments and articles to candobetter.net

Candobetter would welcome input - in the form or articles and comments - from our friends in Singapore on this matter.  At the moment there are problems posting on this site if you do not use Explorer. We are very sorry (and embarassed because this is an open source site).  If you experience real problems, please email us via the contact link at the top left of our page (http://candobetter.net/?q=contact), labelling your contribution, "Comment  or article for CDB.  We do hope soon to fix our upgrade problems.