1. Please consider the Green Wedges when you vote next month. With this in mind, the Green Wedges Coalition is hosting an election forum at our AGM, at 1pm on Tuesday 28 October, in the Legislative Council Committee Room at Parliament House, Spring Street, Melbourne.

The Labor and Greens Planning Spokesmen, Brian Tee and Greg Barber have agreed to address the AGM The Minister, Mr Guy, after initially indicating that he would address our AGM, has declined: we have asked him to send a representative. Professor Michael Buxton will also attend and speak.

NBNB: If you are able to attend, please can you RSVP to [email protected] by Monday 27/10?

The Green Wedges are still under threat, though we have been quieter than the turbulent days of the "logical inclusions", "anomalies" and the rural zones review. We are still picking up the pieces, but fortunately there is still a lot of land protected in the Green Wedges.

The threats this year are not as overt as they were before the 2010 election, but they are still there. With 50,000 ha of Green Wedge land rezoned for Urban Growth - and likely to provide up to 50 years of urban sprawl, all three parliamentary parties are now committed to protecting green wedges. Plan Melbourne provides for a permanent urban boundary, but read the fine print and you will see that the Metropolitan Planning Authority, which seems to be just the Growth Areas Authority in sheep's clothing, has responsibility for implementation, with input from Councils.
Minister Guy says this does not herald a new round of rezoning bids and we certainly hope he is right.

Apart from this, the main threats to the Green Wedges now consist of:

* Changes to the Rural Conservation Zone. as a result of the Rural Zones Review. Once the most sensitive zone for protecting the highest conservation status land, a number of tourism and urban uses have now been permitted (or have had the rule that they must be in conjunction with agriculture, wineries or other green wedge uses, removed) so that there is now less protection for RCZ, particularly in the rural areas, than there is for GWZ and GWAZ. See list below.

When Green Wedges last met with Minister Guy in June, he said he would restore the protection provisions, which he
fortunately chose to retain for the GWZ and GWAZ after initially proposing to make the same changes.

* Decisions by Kingston Council to rezone or otherwise pave the way for urban-scale subdivision (potentially) almost all of the privately owned land in the Kingston section of the Green Wedge. (For details, see the Defenders of the South East Green Wedge bulletin (below) and petition (attached).

Planning Minister Guy has said publicly that he will not rezone the Green Wedge for residential development, but neither will he restore certainty by refusing these proposals outright. Instead, uncertainty is allowed to fester, and no doubt not only in Kingston's part of the South East Green Wedge but no doubt developers and their friends in other councils are
waiting to see what happens in Kingston. The petition was presented on the last day of the parliament.

Please ask your MPs and candidates where they stand on Green Wedge protection in general and these issues in particular.

2. If you would like to take a tour of the wildflower meadows in the western basalt plains grasslands, google wildflowerwalks.org.au" and that will give you a link to Wildflower walks out West. Thanks to Colleen Miller and to Andrew Booth for the advice: he warns that when he put the address straight into the address bar it didn't work). We have invited the three parliamentary parties' planning spokesmen to take one of these tours, in the hope that whoever is Planning Minister in December will protect at least some more of the 5000 ha of high quality grasslands to be cleared as a result of the 50,000 ha of Green Wedges land cleared since 2010.

3. We helped celebrate the end of this parliamentary term on Thursday by taking part in a PPL rally against the East West Link on the Parliament steps last week. (See pics attached). We had an impact beyond our numbers thanks to Micj Connolly's beautiful placards. Thanks to Julianne Bell for her fantastic efforts to stop the EWL and to save Royal Park. As Kahn said at the last rally, if we support their rally, we hope they’ll support ours. And they certainly did in 2010, 2011 and 2012.

GWC was asked to briefly present a message of support for PT and opposition to EWL. and I read out the same message as the PT not tollroads rally last year: Green Wedges Coalition supports the campaign against the East-West link and for the rail. Building another big road only encourages more sprawl outwards (and sideways) into our green wedges. (thanks to Ann McGregor of Friends of Merri Creek for the words) 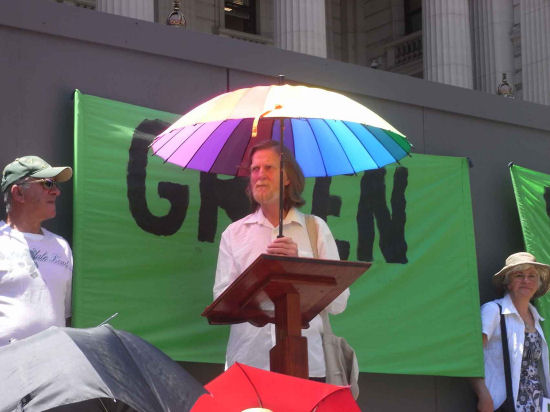 Despite record high temperatures - on 29 November, the hottest day on record for that month - about 80 concerned leaders of activist groups in Victoria attended the "Stop the Planning Disaster Rally" organised by Rosemary West of Green Wedges Coalition Victoria. Supporters gathered on the steps of Parliament on Thursday 29 November. Many representatives of peak group members of Protectors of Public Land Victoria were present.

This rally calls on the State Government:

1 To abandon proposed changes to the commercial, green wedge and rural zones.

2 To revise new residential zones by:
i. Excluding retail, office and other inappropriate commercial uses;
ii. Excluding multi-unit development from the neighbourhood residential zone;
iii. Including mandatory height controls and density controls on all multi unit development in conjunction with local councils and residents; and
iv. Strengthening heritage protection through rewriting the heritage legislation.

3 To retain the democratic right of residents to object to and appeal planning/development proposals.

5 To lobby the Federal Government to curb immigration and stop advertising for new settlers overseas for Victoria in view of the environmental and amenity impacts of the huge population boom and of State Government failure to provide for infrastructure.

6 To refer legitimate planning zones review to the proper forum - the Parliamentary Standing Committee on the Environment and Planning – and to allow a new six-month public consultation period.

Some groups came from as far away as the Mornington Peninsula. Celebrity Rod Quantock performed the role of MC of the rally (see attached photo taken by Jill Quirk President Sustainable Population Australian Inc. of Rod against the Green Wedges banner.) Among the speakers were Professor Michael Buxton of RMIT; Colleen Hartland Member of the Legislative Council for the Western Metropolitan Region; and Brian Tee Shadow Minister for Planning and Sustainable Growth, Member of the Legislative Council for the Eastern Metropolitan Region. People also stayed to speak in the "Open Mike" segment at the end of the rally, despite the searing temperatures.