This advertisement from Kuala Lumpur shows how development companies are not only selling Australian houses in Asia but are offering Australian taxpayer-funded government grants to further entice Kuala-Lumpurans to buy here. These grants were intended to help young Australians get into the housing market but instead the developers are offering them to foreigners. The ad is for housing in the Whittlesea area of Victoria, but the reality is that the same thing is going on all over Australia.

How can politicians tell us we have a housing shortage? If we did, they could sell the houses here and not have to go to foreigners. Why is the government allowing this land way out of town to be built on at all and then sold to foreigners?

We are being taken for fools.

This ad has been sent to Matthew Guy, the Victorian Minister for Planning, and to a local federal mp. How about sending it to your MPs as well, if you feel it is wrong. 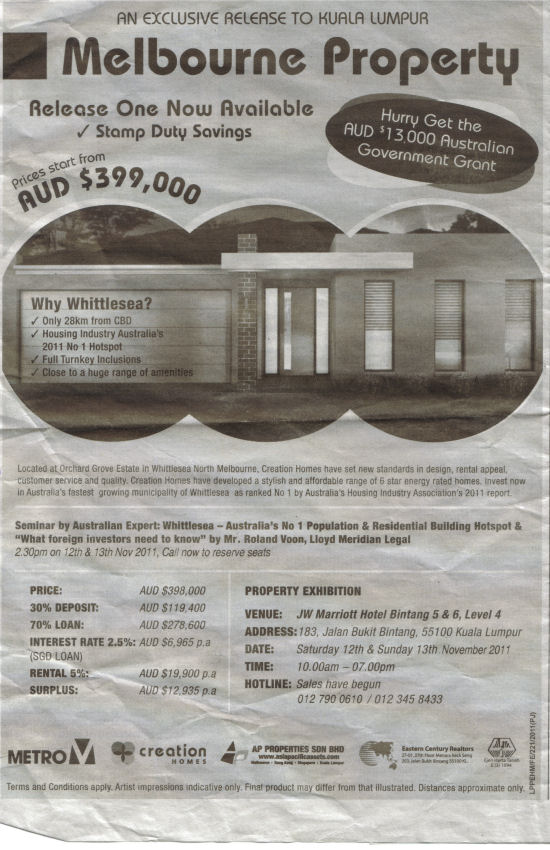 The advertisement says, "Hurry, get the AUD$13,000 Australian Government Grant." Foreign buyers can also save on stamp duty. 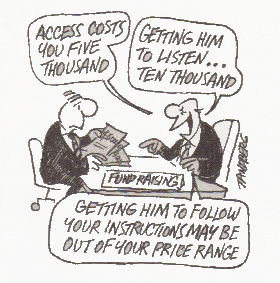 NSW former Premier Nathan Rees told the ALP State Conference in Sydney last month that 'a clean slate' ban on all donations from developers would apply to all levels of the party in NSW.

[Hmm, is that why he was replaced?]

The challenge for Victoria, other States, and the Commonwealth to follow NSW's example and reform their own political funding models without further delay is now clear.

Political campaign reform here in Victoria is long overdue. The public has had enough of the stench brought about by large political donations that appear to be closely linked to contentious property developments and favourable planning decisions.

Political donation disclosure is a joke. The next Victorian State election is expected to be held on 27th November 2010, but loopholes in election campaign disclosure law mean that political donations made between now and June 2010 will not even be disclosed to the public by the Australian Electoral Commission (AEC) until 2011, and donations made between June 2010 and Election Day will not be disclosed to the public until a year later in 2012 !

This lack of transparency is undemocratic, and must not be allowed to continue.

In May 2008 a total of 514 healthy kangaroos were exterminated on the former Belconnen Naval Transmission Station by the Department of Defence.

RSPCA-ACT chief Michael Linke insisted that the kangaroos were ‘starving’ even though eye-witness accounts and photographic evidence showed no starving kangaroos. They do after all, eat dry wild grasses, and have been doing so for the last 40 million years.

According to Dr Maxine Cooper, Environment Commissioner, the kangaroos at Belconnen were a threat to certain vulnerable and endangered species of fauna and flora on the site (Ginninderra Peppercress, Striped Legless Lizard and Golden Sun Moth), even though the EPBC Act lists threats other than kangaroos (such as weeds, feral animals, domestic dogs and cats, land clearing, agriculture, slashing, inappropriate burning, livestock, rabbits, rock removal and vehicles).

Yet cows were grazing in the adjacent paddock, apparently not a threat to the species listed (as if moths and lizards recognise fences!).

So if both excuses of starvation and threat to endangered species were untrue, what was the real reason for the Belconnen massacre last May?

These healthy kangaroos, relaxed, uncrowded, in lush surroundings are all dead - order of ACT Australian government.

Housing estates due to go up around the area. (Does anyone know which developers?) The human species here is simply blind, absurd, and ridiculous to pretend that kangaroos are overpopulating when they are trapped and surrounded by expanding human populations, brought in to fill housing estates. Developers and government should be put on trial for causing enormous and needless suffering. They make Australians ashamed. 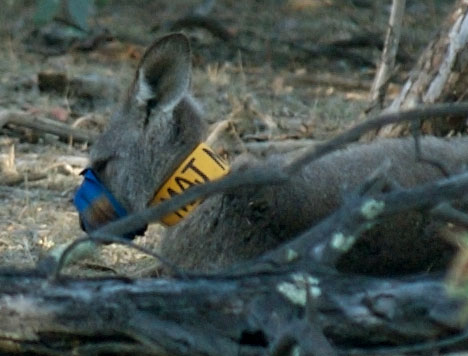 Some animals saved, after being ear-tagged, for fertility experiments and sterilisation.This animal is ‘darted’ with anaesthetic, then collared, and blindfolded to minimise stimulation, prior to contraceptive implant or sterilisation. Wildlife experts say it was all unnecessary.