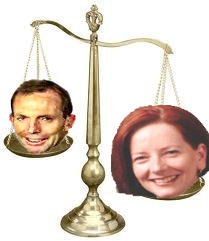 For decades our elected leaders have used the hackneyed phrase 'governing for the country and not for opinion polls' as a way of excusing their autocratic decisions and impositions. Claiming to serve what they said was the "national interest," they have ignored public opinion and even election promises.

Today, on Geraldine Doogue's "Saturday Extra" (ABC radio national), the wrong impression was given by a British-accented commentator that the GST had been brought in in Australian in a fair and reasonable manner. This is infamously untrue and misleading on election day.