The mainstream media has given a great deal of coverage to the COVID-19 pandemic - as it should - but interwoven among the stories on poor vaccination rates, conspiracy theories, and the people ignoring quarantine, there is a consistent run of horror stories on the impact of lockdowns, often with a message that we must get back to the pre pandemic "normal" life. This is understandable, businesses are going broke, unemployment is rising, domestic violence and mental illness are increasing. It is an unpleasant situation, but returning to the old norm is not a solution. This, after all, was the lifestyle that created human movement into wilderness areas, bringing us into contact with pathogens that we have little resistance to combat. 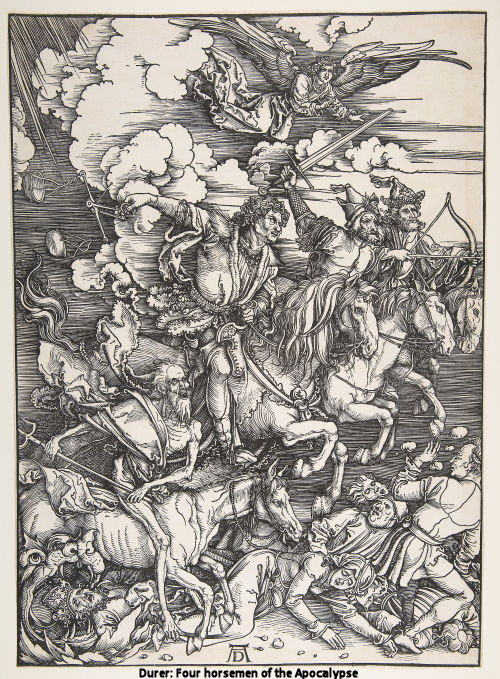 While Covid is terrible, Ebola is far worse, as was the Black Death before antibiotics, and scientists warn that there are more diseases in the pipe line, either through contact with animals, or the mutations of existing ones. We have made pandemics more likely by concentrating humans in apartment towers, prisons, aged-care centres, and supermarkets. As well, we have simplified transmission, with fast transport systems that spread the virus rapidly around the globe, while human failures - denial, human rights issues - all assist in keeping the virus in circulation.

But while we anguish over these self-induced plagues, most of us are unaware of other plagues that threaten the global food system. The world is even more susceptible to an agricultural pandemic than it was to COVID-19, and is less prepared to fight it, simply because of the enormous range of threats to live stock and plants. Food production is also highly concentrated. In the US, three states supply 75% of the vegetables, and 2 percent of feedlots supply three-quarters of the country’s beef. More alarmingly, both crops and livestock are genetically uniform. "Over the past century, crops have lost 75 per cent of their genetic diversity, making them potentially more susceptible to new pathogens or pests.". (See https://ecos.csiro.au/australian-farmers-face-increasing-threat-new-diseases-report/.)

A quarter of the genetic material in America’s entire Holstein herd comes from just five bulls. Monocultures like this are exceptionally vulnerable to disease. They are like fast-food for pests, like locusts, rats or mice, and for pathogens like stem rust, rice blast, foot-and-mouth disease, avian flu, hog cholera, all of which threaten all our major food sources.

Foot-and-mouth disease is so contagious that the discovery of one case in a herd usually triggers mass culls. In the UK, an outbreak in Northumberland in 2001, occurred when contaminated pork, that had likely been illegally imported from Asia, was fed to a herd of pigs, triggering a national epidemic of foot-and-mouth disease. Soldiers were brought in to help slaughter the affected herds. Six million sheep, pigs, and cattle, died. As film of the British countryside alight with burning animal corpses, and bulldozers shoveling rigid carcasses into huge piles for incineration, reached more people, tourism dropped 10 percent. By the time the outbreak ended, at least 60 farmers had taken their own lives.

Researchers are racing to develop a treatment or vaccine for African swine fever. This highly contagious hemorrhagic disease does not infect humans, but in the past couple of years, it has killed a quarter of the world’s pigs. African swine fever has not yet been detected in Australia but in China, the virus has claimed at least 40 percent of the country’s pig population, and the price of pork more than doubled from 2018 to 2019 — a serious problem for a commodity whose cost has a high political significance, and forcing the government to import over a million tonnes in March this year. There has also been mass cullings of poultry in Korea, India and Japan due to the H5N1 virus. The situation was even worse in China, where 100 million young chicks were slaughtered because Covid travel restrictions had blocked poultry food shipments.

Australian agriculture, plants, animals, fish, and native fauna, are highly vulnerable to imported pathogens due to free trade, people movements, and a lack of understanding of the dangers. One example is Myrtle rust, a fungus that causes diseases in the plant family Myrtaceae, which is Australia’s dominant plant family, with over 2000 varieties, right across the continent. This Myrtle rust fungus jumped from the Amazon forests to eucalyptus trees, which had been raised in large commercial plantations in Brazil. Australian scientists warned governments of the danger in 2008.

The Invasive Species Council at https://invasives.org.au/our-work/pathogens/myrtle-rust/ describes how the rust was found on a commercial property in NSW in April 2010. And that, “Inexplicably, after just one week of searching and finding the rust in only one other nearby facility and none in surrounding bushland, the national response was stood down by a federal committee.” A national response was “only reinstated in December after the disease was found in in multiple sites” … and “deemed irradicable.”

“It has now spread to far north Queensland and Victoria and there are no control options in bushland. NSW has already made a preliminary determination to list myrtle and eucalyptus rusts as key threatening processes. They note that the area of highest risk in NSW – the coastal zone from Illawarra to the Queensland border – includes a large proportion of the state’s conservation reserve system, many Myrtaceae-dominated ecological communities, and most of NSW’s World Heritage-listed rainforest.”

Our failure to prevent this disease from entering suggests that we are likely to see many more, including rabies, which, if it became established, would have a profound toll on human and animal health, with mass cullings of domestic and wild dogs necessary.

This is borne out by the discovery of a new disease – cucumber green mottle mosaic virus – which suddenly appeared in the NT - devastating crops around Katharine and seems likely to spread to other regions. See https://nt.gov.au/industry/agriculture/food-crops-plants-and-quarantine/cucumber-green-mottle-mosaic-virus. Atlantic salmon have been hit by a virus that possibly arrived with imported fish food, while the white spot disease that hit prawn farms in Queensland has now spread to wild prawns and crabs. See https://www.abc.net.au/news/rural/2021-01-17/prawn-white-spot-virus-killing-wild-australian-prawns-and-crabs/13060200

The fungal disease wheat rust, which can reduce harvests by up to 40%, is believed to have arrived here in 1973, on the clothes of an international traveler. This strain has now been controlled but a new and more virulent strain, Ug-99 is sweeping through the world and is expected to reach Australia. See https://www.agriculture.gov.au/pests-diseases-weeds/plant/ug99

Honeybees pollinate a third of Australia’s food crops but they are under threat from the Varroa mite, as well as our absurd reliance on pesticides that are fatal to bees. Combined with an outbreak of foot and mouth disease these three would create a disastrous scenario according to Gary Fitt in his report to the CSIRO http://www.csiro.au/en/Research/Farming-food/Innovation-and-technology-for-the-future/Biosecurity-Future-Report. Such a combination would not only cost Australia’s economy billions of dollars, but would also devastate our agricultural industries and environment and severely alter our way of life.

Gary Fitt reminds us that “Australia’s agriculture sector is already constrained by limited soil and water resources and future intensification will bring its own challenges through herbicide resistance and more intensive animal production systems. These factors could all increase the impacts of a biosecurity incident, and reduce the industry’s ability to sustainably meet demand”.

It is an alarming situation, considering that we need to increase food production in order to cater for a growing population, and the need to export food in order to balance our trade, which - through bad governance - depends heavily on imported goods.

To this we could add climate change.