I am writing to inform you that over the past month, I have sent 3 letters to every MP and senator in the Australian Parliament regarding the importance of the Government urgently acting to protect Julian Assange who is currently in solitary confinement in Belmarsh Prison, UK.

He has been in solitary for 2 years, since 11 April, 2019 for exposing war crimes. Also, due to “misinformation” spread during smear campaigns, Assange has had his freedom curtailed and his rights infringed for nearly 11 years now.

Despite the fact that credible experts have reported that Julian has been subject to torture, I find it alarming that to date I have received only 2 letters in response to my 3 letters to all 226 highly paid parliamentarians/public officials. Otherwise, there has been silence & inaction.

Further enquiries today with MP Mark Dreyfus’ (shadow AG) office resulted in confirmation that the Labor party released the attached press release in support of Assange on Jan 5 but, to date, nothing substantive has been done to help Julian. 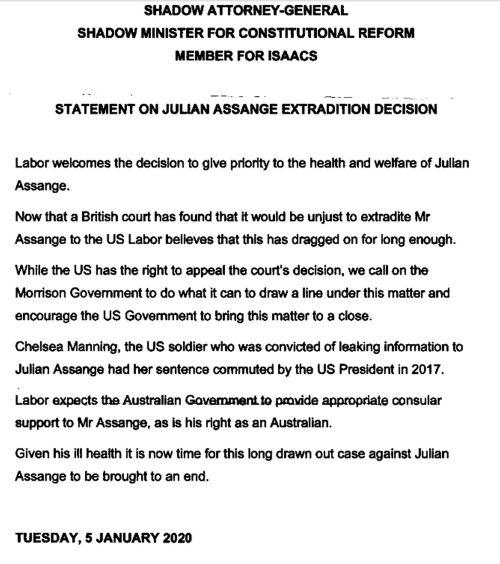 I also attach a copy of my last letter to all politicians dated April 8 2021 and another attachment, “Debunking Myths and Smears” about Julian Assange FYI.

I wish you would take this story up as a matter of urgency. Firstly, because Assange’s life is at stake and secondly because it’s imperative that journalists and citizens protect the right of freedom of expression. This includes the right not to be arbitrarily detained without sensible and tenable due process for doing the work of journalism. In addition to this, importantly, it is about our sovereignty and our rights as Australians.

As Assange has effectively been “incarcerated” for 11 years now due to various false accusations of sexual misconduct and absurd claims of “espionage”, I feel it would be appropriate for the media to raise this issue as a matter of importance for all of us.